In this week’s auction roundup, we look at SDL Auctions’ success at its 100th Derby auction, Bond Wolfe’s cancellations of its May sales in light of Covid-19 and Clive Emson’s recent success after its initiative to swap its five March auctions for broadcast and online auctions instead.

Hundreds of people tuned in to watch SDL Auctions Graham Penny’s 100th Derby auction – the first in its history to be held behind closed doors.

Despite the century-long milestone, just a few staff members were in attendance as managing director and auctioneer Andrew Parker took to the podium in the company’s head office.

The sale saw 500 eager viewers and over 120 pre-registered remote bidders. Buyers placed their bids via telephone, by proxy and over the internet, and more than £2.6 million was raised for sellers – with more post-auction sales still to be agreed.

Parker comments: “It was not the 100th auction celebration we had planned but we were delighted to have such great support from our remote bidders. I missed seeing everyone at the auction, but it was wonderful to know they were out there, watching from the safety of their own homes.”

First under the hammer were a trio of terraced properties in Derby city centre, including 37 Howe Street in Derby, which sold for £86,000 from a guide price of £50,000-plus. Close to the University of Derby and the A38, the mid-terraced property requires improvement and upgrading and had two bedrooms, two reception rooms and the potential for a conversion subject to planning permission. 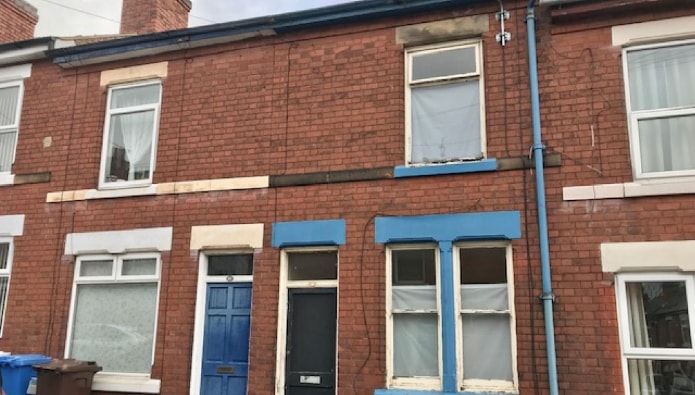 Traditional Derbyshire cottages also went under the hammer, including one in ever-popular Duffield.

Requiring refurbishment, 21 King Street is an attractive stone cottage in the heart of the village, boasting two bedrooms, a sitting room with cast-iron log burner, a kitchen and a bathroom, and a rear garden. It sold for £130,000 from a guide price of £95,000-plus.

Following on from this was another cottage in the neighbouring village of Quarndon. The double-fronted 55 Church Road abode attracted equally enthusiastic bidding, selling for £155,000 from a guide price of £135,000-plus.

Heading further up the Derwent Valley Mills World Heritage Site, 20 Long Row in Belper was the third Derbyshire cottage to sell under the hammer, achieving £153,000 from a guide price of £137,000-plus.

The Grade II-listed property, which requires upgrading and improvement, includes character features including sash windows and exposed beams and is located in the heart of Belper’s Conservation Area, with views of the iconic East Mill.

The sale of 148 Allestree Lane in Allestree ended the auction on a high note. The four-bedroomed semi-detached property boasts many period features, including Minton tiled flooring, moulded coving, original panelled doors and deep skirting boards. Requiring full refurbishment, the house sold for £230,000 against a guide price of £210,000-plus.

Parker concludes: “While we were sad to miss the buzz of being in a crowded auction room, we were so thrilled to be able to offer so many great properties for sale as normal and are humbled to have such great support from our buyers, sellers and partners.”

“We have proved that, despite the current social distancing rules, it is possible to keep the property industry moving – and that buyers are showing just as much interest in our properties as before.”

The team at SDL Auctions Graham Penny are continuing to work remotely and are now on the lookout for properties to sell in the next Derby auction on Wednesday May 13. For more information, or to request a free no-obligation virtual auction valuation, click here or call 01332 242 880.

Safety first: Bond Wolfe Auctions to cancel May sale in face of Covid-19

Bond Wolfe Auctions has cancelled its May auction in response to the Covid-19 pandemic.

Gurpreet Bassi, chief executive officer, says the health and safety of clients, staff and the wider public is at the forefront of their decision and a priority over Bond Wolfe’s commercial objectives.

He explains: “While we are fully able to operate a ‘remote bidding only’ auction or even a full online sale, it is doubtful that we would achieve the best possible price for our vendors.”

“Additionally, it is completely unreasonable for us to expect potential purchasers to buy property without the possibility of carrying out their full due diligence to include internal viewings and surveys.”

He explains: “While we are fully able to operate a ‘remote bidding only’ auction or even a full online sale, it is doubtful that we would achieve the best possible price for our vendors.”

“Additionally, it is completely unreasonable for us to expect potential purchasers to buy property without the possibility of carrying out their full due diligence to include internal viewings and surveys.”

Bassi says that by putting properties on the market, it would encourage people to ‘flout the lockdown and social distancing rules’, even if only to inspect the property externally, which would be impossible for the auctioneer to police.

The decision comes after Bond Wolfe Auctions achieved record results in its February auction, raising over £20 million with a 95% sales success rate.

Bassi continues: “It is disappointing for us as a business, as we are on a roll, but it is absolutely the correct decision. For the February auction, we had a record number of remote bidders by telephone, online and proxy – over 850, and we undertook a record number of viewings, well over 6,200, in the lead up to the auction.”

“But after considerable deliberations with management and staff, and in the best interest of achieving positive results for our valued clients, we have taken the difficult decision to cancel our May auction.”

“We have been constantly monitoring the situation surrounding the Covid-19 pandemic while following all of the government’s advice and updates on social distancing. As a business we have taken this decision as we feel that it is the only responsible and safe action to take.”

He urges people to follow government instructions and only leave their homes for medical reasons, exercise and essential shopping.

“We will be announcing our next auction dates in due course and expect to have the largest-ever auction to take place outside London, exceeding our own previous records,” he concludes.

Clive Emson cancelled its five March ballroom sales across southern England as a response to the pandemic measures enforced by the government.

Instead, the auctioneer swapped to a broadcast facility for Kent and Essex then switched halfway through to online sales for West Country, Sussex and Surrey, and Hampshire and the Isle of Wight – achieving £13.5 million of sales.

“It was a week few of us will ever forget,” says James Emson, managing director of Clive Emson. “We took the decision to take the rest of the auction online in order to comply with the spirit of the just-announced lockdown.”

“Even though there were a handful of us for the broadcasts, with social distancing, the health of staff had to come first. We were naturally apprehensive about whether bidders would have an appetite for purchases online at such short notice, but they proved that property and land sells whatever the economic weather. Indeed, some lots generated bidding wars.”

The online element of the campaign generated more than £4 million in sales, with an overall sales figure of £13.5 million – a sales percentage of 70%.

Emson says the result was ‘incredible’ given the challenges brought about by Covid-19 and pays tribute to his colleagues for keeping the virtual show on the road in the most demanding of circumstances.

“We now look ahead to the next series of sales, which will all be held online. The third round takes place on Wednesday May 6, with a closing date for entries of April 14,” he concludes.

Ahead of its first auction of 2018, SDL Auctions Graham Penny...