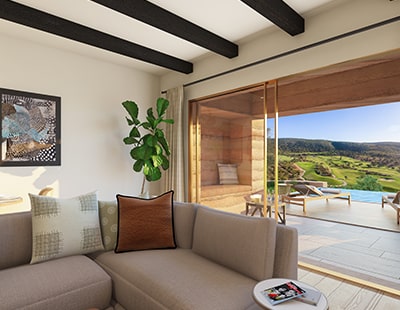 The event was attended by more than 400 people from all over the world. Here, we give a brief summary of what was said, but you can view the webinar in full at the bottom of this article.

The enduring appeal of Portugal

Casaburi said the Portuguese Golden Visa scheme is one of the world’s most popular residency by investment schemes for a reason, with Portugal often ranking as one of the best countries in Europe for expats. In Portugal, there is no inheritance tax and other fiscal exemptions which make it attractive. There is also the Non-Habitual Residency (NHR) tax programme, which offers a number of benefits for those looking to move to or invest in Portugal.

“English is widely spoken here, there are international schools, it’s safe and in a strategic location, and also has a flourishing business environment,” Casaburi said.

“Pre-Covid, there were a record number of tourists visiting, too. In the small window of opportunity last year, when there were air corridors, the Algarve had 66% occupancy in August.”

She said there is a new mix of people coming over, with it no longer being just a place for retirees to enjoy the sun.

As for the Golden Visa, which is now available to British citizens, most applications in the last eight or nine years have emanated from China (27.1%), followed by Brazil (11.5%), which has deep cultural and historical ties to Portugal. Next up is the USA (6.9%), South Africa (6.8%) and Turkey (6.6%), with the rest of the world accounting for the remaining 41.2% of applications.

“Investment will still happen,” Casaburi commented. “But it will shift to low-density areas.”

In these lower density areas, the investment required is lower, standing at €280,000 for a renovation property and €400,000 for a new development. Commercial properties and properties with a tourism license are exempt from the Golden Visa changes.

“The time is now to benefit from the full options of investment in the most cost-effective way,” Casaburi insisted. “It makes sense to start now because you have more choice to select the best investment route for you.”

From January 2022, the likes of Lisbon, Porto and much of the Algarve will no longer be eligible for the Golden Visa, so anyone looking to invest in these areas has a nine-month window to work with.

The process of getting a Golden Visa will typically involve onboarding, getting a Portuguese bank account and NIF number, making the investment, applying for the Golden Visa, gaining pre-approval, followed by a biometric visit and the issuing of the Golden Visa itself.

To benefit from the current rules – which still allows investment in high-density areas like Lisbon, Porto and much of the Algarve – online applications must be in before December 31 2021, with the new rules then applying from January 1 2022.

Rafael Sena said Portugal has remained attractive in recent years, with an increase in international demand and a shortage of supply keeping prices and long-term capital growth high.

He points to the weather, safety, security, tax incentives and lifestyle on offer as reasons for its continued popularity in a post-Covid world.

“In Lisbon, Portugal’s capital, there are 600,000 people and very strict planning rules. Asking prices have remained resilient in Lisbon, Porto and the Algarve because of the shortage of supply,” he said.

He added that, despite concerns about overseas investors buying up homes for investment that could otherwise be used by locals, Golden Visa purchases actually only represent a small amount of the overall transactions in Portugal.

Only 13.3% of real estate in Portugal is acquired by non-resident investors (including EU citizens). Of this, less than 1% is accounted for by Golden Visa applicants. The remaining 86.7% is purchased by Portuguese residents.

Sena said that Golden Visa investors are looking at Lisbon, Porto and the Algarve while they still can, with an increase in demand in these areas.

“Next year, we expect a significant increase in low-density areas, with people seeking renovation homes and new developments in these areas,” he argued. “A lot of the country is low-density, so there will be many opportunities.”

When asked about the impact of the pandemic on property searches, Sena said it had improved the way things are done remotely.

“You can get feedback from clients instantly through digital platforms. We can do live calls while in the property, we can even fly drones to give an idea of how the neighbourhood looks. This makes people feel closer to the neighbourhood before choosing to invest there,” he said.

In terms of the impact on the market itself, Sena said that prices have actually increased in Portugual in nearly every part of the country, despite the challenges of 2020 and the early parts of 2021.

“It didn’t crash, like before. There was a shortage of supply and high demand. Simple economics has meant prices have remained high,” he said.

You can see the full webinar at the bottom of this article.

Ombria Resort, a sustainability-focused resort in the Algarve which PIT has featured a number of times in the past, has seen a surge in sales of its Viceroy Residences since the beginning of 2021, particularly from UK buyers seeking to benefit from the Golden Visa residency opportunities.

Since the start of 2021, Ombria Resort has sold more than €3 million worth of its Viceroy Residences, while a further seven units have been reserved and will be closing over the next few weeks.

As a result, a total of 27 units have been sold, meaning 40% of the apartments have now been snapped up since the launch of sales just over a year ago.

A sustainable low-density development currently under construction and due to open in Q2 2022, featuring southern Europe’s first five-star hotel managed by Viceroy Hotels & Resorts and Algarve’s newest 18-hole golf course, Ombria is located in the heart of the central Algarve. It sits 20km inland from a number of golden beaches and Faro Airport, and less than 7km north of the historic city of Loulé, one of the main historic, cultural and trading centres of the Algarve.

The rise of remote viewings and property purchases

Ombria said it recognised the pandemic restrictions early and developed its unique ‘Ombria Sales App’, which allows the opportunity to show potential buyers the location of each apartment, as well as carrying out virtual visits and displaying the real golf views from each of the apartments.

The resort’s ongoing sales success means that the prices of the remaining units were upped on March 1 2021, the second time Viceroy Residences’ prices have risen since the launch of sales in December 2019. The first increase took place in March last year.

It says the pace of construction works at the Viceroy Hotel and Viceroy Residences is full steam ahead, with currently around 200 workers daily on the construction site, all operating under strict health and safety rules regarding Covid-19.

A general manager for the Viceroy Hotel & Residences, to oversee the development, is expected to join the team next month (May 2021) to prepare for the opening which will take place in June 2022.

Portugal on roadmap out of lockdown

Following a strict two-and-a-half-month lockdown, Portugal is currently the best-performing country in the EU regarding reducing Covid-19 new cases and transmission rates.

Consequently, the Portuguese government recently announced a gradual easing of the lockdown restrictions, which began in March. Portugal has also been removed from the UK’s red list as the country continues to accelerate its vaccine rollout, although there are still considerable restrictions on travel between the UK and Portugal (with no direct flights until at least April 15, and potentially beyond this, as a cautious approach continues to be employed).

The team behind Ombria say the Viceroy Hotel & Residences’ design and layout have been perfectly adapted to post-Covid times and ‘will therefore continue to be a popular choice both in terms of use of Viceroy Residences (purchase and rental) and for Viceroy Hotel guests for holidays’.

The team says that the Algarve region, by virtue of being one of Europe’s most popular, peaceful and low-density destinations, has become a leading example in providing a healthy environment and greater wellbeing for its residents and visitors.

The resort focuses on sustainability, low-density living, nature and safety, ‘making it the perfect choice for families, couples and individuals looking to relocate and achieve a healthy work-life balance in the countryside, away from the coastal crowds but within easy reach of several beaches’.

The first phase of the resort offers an 18-hole golf course, the five-star ‘Viceroy at Ombria Resort‘ hotel with 76 guestrooms, six restaurants, pools, a spa, a gym and kids club. There is also the Viceroy Residences, 65 one and two-bedroom apartments (starting from €525,350), as well as The Alcedo Villas, 12 luxury villas (starting from a much pricier €2,550,000), for property buyers to choose from.

Meanwhile, over in near neighbour Spain, an accountancy firm has claimed that more than 600,000 Brits have been left in expensive tax limbo by the latest government update on overseas travel.

Spanish Taxes Online says that non-resident holiday homeowners have to pay Spain’s 24% Modelo 210 tax on the estimated letting value of their property, whether it’s rented out or used exclusively by the owner.

And the firm argues that Boris Johnson’s inability to confirm that non-essential travel will be allowed after May 17 lengthens a year of concern for people who have been contributing thousands of euros for largely empty properties.

The proposed traffic-light system, concrete details of which are due later this week, should at least allow people to visit Spain without quarantining when they return, the company says.

However, the possibility of multiple tests before and after departure may still deter many holidaymakers, further affecting rental incomes.

“Holiday homeowners have been hit hard financially by a mixture of Covid-19 and the UK leaving the EU, which saw their Modelo 210 tax bills increase by 25%,” Nick Ball, marketing director at Spanish Taxes Online marketing, said. “More delays and uncertainty are worrying, costly and unfair.”

Spanish Taxes Online says it can, however, save people time and money by filling out and filing Modelo 210 tax returns on their behalf. The fast, secure service, which it says costs just €59, means homeowners don’t need to deal with the Spanish tax authorities or complete any complicated forms – especially useful for non-Spanish speakers.

For more information, you can contact Nick Ball at marketing@spanishtaxesonline.com. The company, based in the Canary Island of Lanzarote, was founded by British-born senior tax accountant Ben Einar Simkins and employs a team of English-speaking experts.