Across the country, new developments continue to pop up everywhere you look – from the south coast of England to the west coast of Scotland.

Here is our latest roundup.

Reaching for the Tree Tops in Bournemouth

A ceremony was held on Monday 3 February to celebrate the milestone of Bournemouth Development Company’s St Stephen's Road development, which will be known as Tree Tops, reaching its highest point.

The £12 million Tree Tops scheme is set to provide 46 new one, two and three-bedroomed apartments, aimed at the family rental market and with the goal of ‘helping to contribute to the creation of sustainable communities in the town centre’.

The scheme is being led by the Bournemouth Development Company, a public-private partnership between BCP Council and Morgan Sindall Investments.

In addition to ‘providing high-quality, contemporary homes for local families’, this project aims to return profits back to the council for investment in future regeneration projects.

The scheme is due for completion at the end of 2020, with the 46 apartments split into 28 and 18 flats across two multi-storey blocks. Both of the blocks have been ‘sensitively designed’ to combine traditional external materials such as brick with contemporary architecture. 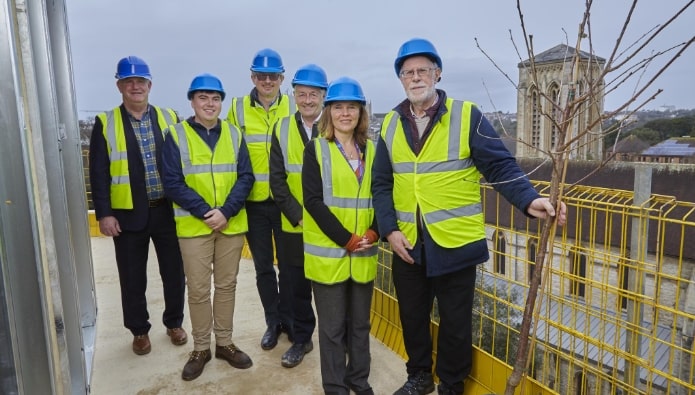 The topping out ceremony was attended by around 20 guests including civic leaders, project partners and construction workers, and included the planting of a tree in the grounds. Taking a tree to the top of the building is a longstanding tradition in the construction industry and, once the tree was taken to the top of the highest block, it was planted in the grounds by Cllr Vikki Slade.

Slade, leader of BCP Council, said of the milestone achievement: “It’s been really exciting to see this new development take shape in a way that both enhances and complements the local area.”

“Once completed it will deliver attractive and much-needed new homes for our community,” she added. “This will support our vision for the area and the growth of Bournemouth’s town centre as a great place for people to live, work and spend their spare time.”

Duncan Johnston, director at Bournemouth Development Company, said the Tree Tops scheme was well on its way to completion, ‘which is great news for Bournemouth, and is another step towards regenerating the town centre and delivering funds back to the council for future regeneration.’

He added: “We are delighted to have been able to transform this previously under-used and awkward site into a modern, sustainable development that will provide safe and secure homes for families well into the future.”

BCP Council will retain ownership of the site and purchase the completed development as a long-term investment asset, with the homes then operated as a private sector rental scheme via the council’s wholly owned services company Seascape Ltd under a 25-year lease.

Property investment platform Blend Network, which specialises in funding low-cost, accessible housing developments, has announced the completion of the advance of a £460,000 loan to finance the acquisition and redevelopment of a former shoe factory in Wellingborough, Northamptonshire, into residential apartments.

The loan was subscribed in only 29 minutes and will part finance the acquisition of the development site, allowing the borrower to develop the property into a fully residential scheme. 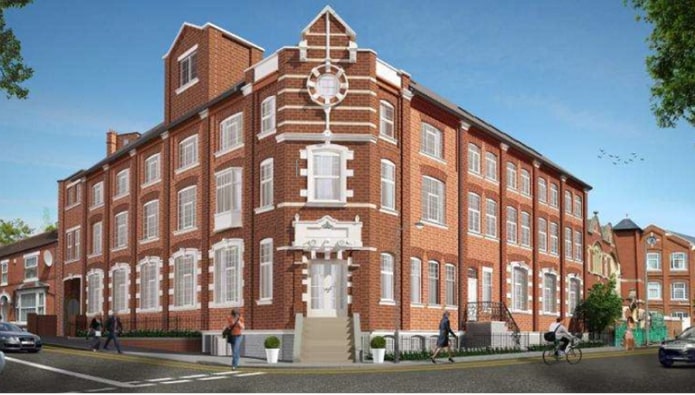 Alongside a further loan in Northern Ireland, the high demand for Blend Network’s funding meant that both loans were subscribed in record time – at just 30 minutes.

With the housing crisis especially acute in the East Midlands - a recent National Housing Federation report said that an additional 17,200 homes need to be built in the region to keep pace with demand - the requirement for low-cost, accessible housing is higher than ever and Blend Network says it’s seeking to develop further ties with local developers to help accelerate housebuilding in the region and play its part in alleviating the crisis.

A property investment platform which allows lenders to invest in property-secured loans, Blend Network enables private lenders to co-invest from £1,000 with very sophisticated high net worth lenders in the same deal, in a move that it says is leading to the increasing ‘democratisation’ of investing. The platform claims that investors so far have been benefitting from an 8%-plus return per annum.

Yann Murciano, chief executive of Blend Network, said: “We are delighted to be able to facilitate this loan, which has allowed an important housing development in Wellingborough to go forward. A shortage of accessible housing is a key challenge in Northamptonshire and we hope to play a strong role in expanding the availability of housing in the county.”

Dr Fahd Khan, director of Provident Homes Ltd, said the loan would allow the company to convert a neglected Victorian treasure into much-needed accommodation within Northamptonshire. “As a developer, we are experienced in a variety of investment strategies and there is not a shortage of opportunities available. However, many opportunities have been delayed, frustrated or lost due to the constrained nature of most lenders that we have experienced in the past, but this was not the case with Blend Network.”

A successful conversion project in the heart of Kilmarnock, which saw five newly-refurbished flats rented within six days, is paving the way for further input from developers on continuing efforts to regenerate the town centre, according to Sweeney Group.

The former council building at Bridge Lane, just off King Street, had remained derelict for over 12 years before its recent conversion by Sweeney Group. The upper floors of the property previously housed the offices of East Ayrshire’s Child Protection Services, which were relocated to a nearby address more than 10 years ago.

Following 10 months on the site, which covers a total of more than 3,600 sq ft, Sweeney Group has transformed the space into four two-bedroom flats and a single one-bedroom flat.

After a wave of enquiries, handled by Tom and Jackie Telfer of ‘Letts Agree sales and lettings ltd’ in Kilmarnock, all five properties have generated strong interest with three of them now secured by tenants.

When visiting the site last month, Fiona Lees, East Ayrshire Council’s chief executive, welcomed the efforts of the developers as a vital component in the wider campaign to revive the town centre. 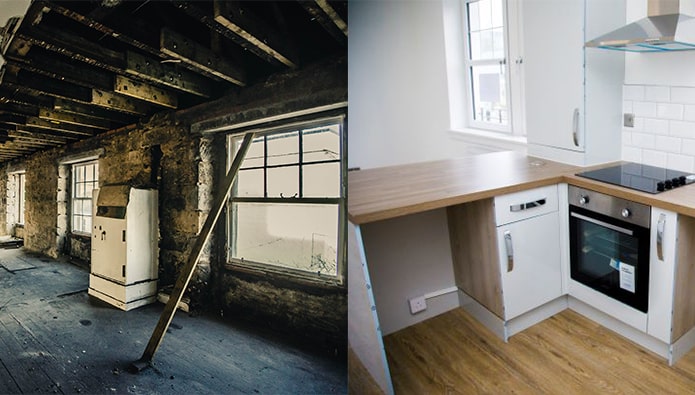 “Projects like this one by Sweeney Group highlight the need for co-operation between the public and private sectors to achieve our goals for restoring Kilmarnock as East Ayrshire’s key commercial and industrial centre,” she said.

“While the council is naturally taking the lead on this, it requires input from all quarters. We welcome contributions for all of those interested in the redevelopment opportunities that will inject fresh economic life into the area.”

Sweeney Group, a family-owned business headed up by brothers Martin, 39, and Stephen, 35, began trading six years ago with the brothers working as construction contractors, but they have expanded during the last couple of years to amass a portfolio of buy-to-let properties across the west coast of Scotland.

In total, the brothers have raised £1.5 million over the years to fund their development activities – through a mixture of traditional methods and an arrangement which offers investors, initially friends and family but increasingly private individuals, a guaranteed 10% annual return on their money.

Sweeney Group, which specialises in the revival of derelict buildings, has its own construction business, Rhino Contracts, which carries out work on Sweeney’s development projects on an in-house basis.

“The key to reviving our town centres is to bring people back in,” Stephen said. “People who live locally want to shop locally, so creating homes has great knock-on effects for the town’s economy.”

He added: “Many people are putting in a lot of work to bring the centre of Kilmarnock back to life, and we firmly support the council’s strategy on bringing people back to live and work in the town.”

Kilmarnock, an established hub within East Ayrshire, has struggled in more recent years thanks to deindustrialisation - with the loss of its traditional mining, engineering, textiles and whisky industries. There have been recent council-backed efforts, however, to counteract this, including the restoration of historic buildings such as the former Opera House, the Palace Theatre and the adjacent Grand Hall.

Additionally, the town has benefitted from the construction of the £53 million Ayrshire College Campus, while work is now getting underway on stage one of the £63 million HALO regeneration project at the former Johnnie Walker site.

The future for Killie certainly looks much cannier.

A headline story of 2020 so far that readers of Property...

Knights Quarter, the brand-new development in the heart of Winchester, is...