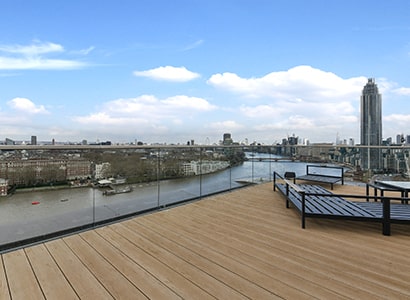 Following our piece on the ongoing works at Battersea Power Station and its environs, Property Investor Today this time explores the transformation of nearby Nine Elms.

At 227 hectares, Nine Elms is considerable in size – it is, in fact, larger than Hyde Park - and sits about a two-mile walk from Big Ben and the Houses of Parliament, while Tate Britain, Sloane Square, Battersea Park and The Kia Oval are all in walking distance.

Across the river is sophisticated Pimlico, while surrounding Nine Elms is young professional hotspots such as Stockwell, Clapham and Brixton.

For years it was one of London’s industrial heartlands, but now its vast brownfield sites are being converted into the capital’s latest residential and business quarter. 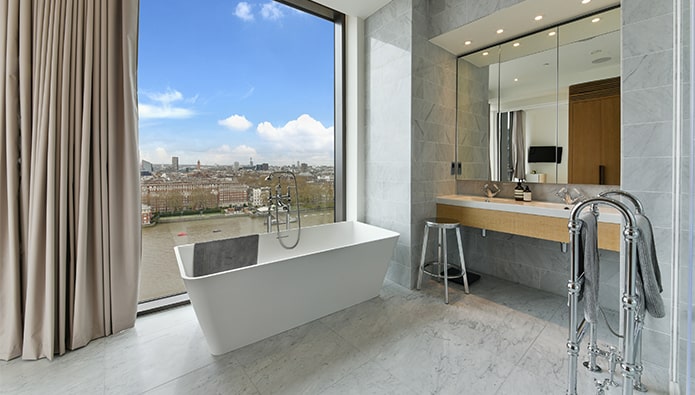 Comfortably London’s largest regeneration project, its flagship development is the 42-acre redevelopment of Battersea Power Station, but it’s about far more than just that.

In all, there is set to be 20,000 new homes, 25,000 new jobs (post-construction), new and improved transport links, new public spaces, new access to the Thames Path, new restaurants, new green space and new schools and health centres. The ambition is to create a whole new community to breathe life into an area that has been without purpose for too long.

There is a combination of 20 separate projects covering 560 acres, with some £15 billion invested into the area’s regeneration.

What new developments will there be?

Nine Elms is currently an odd mix of developments already built or nearing the end of construction and developments which will be coming soon.

Up to 5,000 new homes have already been delivered, and are being lived in, while the project promises another 15,000 by 2031 (with the bulk being delivered in the mid-2020s). The fortress-like, state-of-the-art US Embassy arrived in December 2017, bringing it with many new employees and international attention for a previously unheralded area.

Rather uniquely, the project isn’t just being carried out by one developer, but a number of developers working together to transform Nine Elms – including Berkeley Group, Ballymore and Bellway.

Riverlight by St James (part of Berkeley) was the first to break ground in the area, completing in 2016. Designed by Rogers Stirk Harbour & Partners, the scheme is made up of 813 prime riverside homes, with underground parking, a crèche, restaurants, bars, a food store and other retail spaces. The development, now sold out, ranges in height from 12 to 20 storeys. 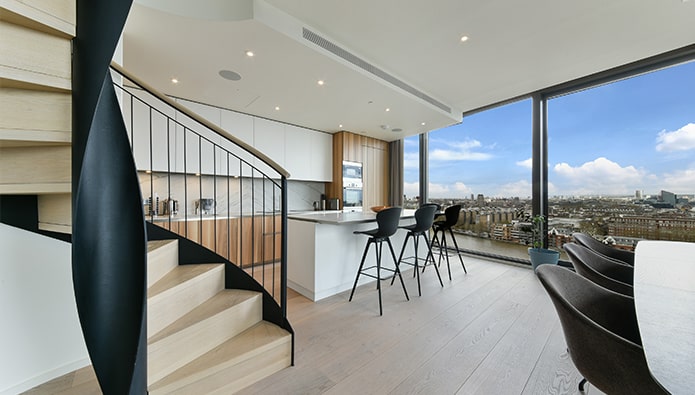 We were invited by well-known London agent JOHNS&CO to see the Embassy Gardens development for ourselves. The agency, which has an office located in Nine Elms, is one of the main sales and letting agents for Embassy Gardens and has seen first-hand the dramatic transformation of the area in recent years.

Jon Johnson, sales manager at the Nine Elms branch, and Carla Bradman, marketing director at JOHNS&CO, showed us round and talked us through the regeneration project.

District, a trendy Australian coffee shop offering fancy brunches (think ‘smashed avo’ on toast), is located right in the heart of Embassy Gardens, while Darby’s – a new restaurant from Irish celebrity chef Robin Gill, featuring an oyster bar, on-site bakery and a 1960s jazz vibe – opened earlier this year. The Alchemist, a high-end cocktail bar and restaurant, is set to join the burgeoning restaurant scene in Nine Elms in September.

The target market seems clear – cool professionals, people with wealth to spare, affluent hipsters. The planned arrival of a spa, a cycle-bar and an 8,000 sq ft art gallery further backs this up.

But what about the apartments themselves? Phase 1 of Embassy Gardens, which has sold out, included the Capital and Ambassador Buildings, while Phase 2 – almost complete and ready to welcome residents from the end of August through to November – is made up of the Legacy Buildings, home to a world-first Sky Pool (where residents can float through a 25-metre crystal clear, acrylic pool that stretches between two buildings) and The World Heart Beat Music Academy.

Phase 3, delivered by EcoWorld Ballymore, will include the aforementioned One Embassy Gardens, more new homes and further office space.

We’re taken to one of the apartments in the Ambassador Building, which has a very high-end, slick, hotel-like feel – with pools, gyms and 24-hour concierge on offer to residents.

The apartment is huge, airy, modern and beautifully furnished, with truly sublime panoramic views across the whole of London via the floor to ceiling windows. A spectacular rooftop terrace provides even better views, if that were possible.

“It’s heavily investor, about 80% of owners rent out the homes,” Johnson says when we ask who buys the properties. “They never stay empty. There are many tenants from overseas who pay upfront. Nine Elms is in favour of renting overall, making it appealing to buy-to-let investors.”

Elsewhere, there is Lexington Gardens at The Residence – by Bellway - offering homeowners and investors a range of one, two and three-bedroom apartments, all with sweeping views of the Thames and the capital’s skyline.

Some 262 apartments were available for reservation from 28 February 2019, with apartments due to be completed in Q1 2020. 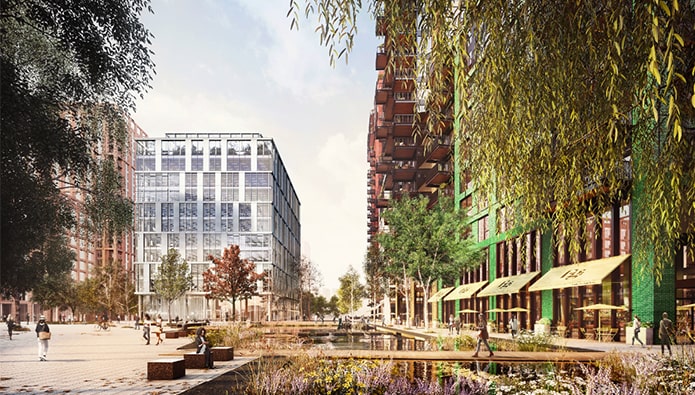 The most luxury new development, meanwhile, will be on offer at the 50-storey DAMAC Tower Nine Elms, which has an exclusive partnership with Versace Home. It will include studios and one, two and three-beds, with special ‘winter gardens’.

Additionally, there’s Nine Elms Park – a new development divided up into seven parcels of land and including a school, retail outlets and more new homes – a proposed footbridge to Pimlico, and the sustainable Linear Park, which runs through the whole Nine Elms regeneration scheme. Nine Elms station will join the Northern Line when it opens in mid-2021, providing the Tube links that this part of London has long craved.

The Nine Elms market – what does it look like?

Jon Johnson says there has been a noticeable shift in sales market activity since the end of January.

“The balance of supply and demand has moved and there are fewer but more motivated sellers and more serious buyers committed to making a move.”

“The number of transactions taking place has dropped with less ‘fresh’ property out there, but buyers are serious – hence us experiencing our lowest level of sales falling through since we opened the office.”

“The majority of our buyers still originate overseas as Nine Elms still offers overseas investors an incredible opportunity to invest in what is being earmarked as the largest regeneration area in Europe,” Johnson added. “The currency market has brought more buyers from the Far East, who are benefiting from a ‘double discount’ - not only have prices in the area temporarily fallen, but their native currency now buys them more sterling.”

“Virtually everything in Nine Elms is new, therefore most of our purchasers are interested in something modern, easy to maintain and rentable all year round. That being said, we are also selling a lot of off-plan properties that aren’t due to complete for another one to three years.”

Matthew Spencer, lettings manager at JOHNS&CO Nine Elms, says the rental market is incredibly busy at the moment, with demand outweighing supply and one-beds in particular flying off the shelf.

“We see a lot of students - international and domestic. We're also seeing a large number of expats renting in the development who are drawn to the easy lifestyle, the ability to move straight in and settle into a high standard of living in a central location. We've seen an uplift in relocation agent enquiries recently too; our most recent deals being with HSBC and IBM.”

A lack of soul?

There are certain criticisms that could be levelled at the Nine Elms project – some don’t appreciate the numerous high-rises spiking into the air, for example. It’s also very much targeted towards a wealthy clientele, and despite the arrival of a number of restaurants, shops and amenities, it does still feel a little bit soulless and corporate at present.

Compare and contrast with nearby Brixton – busy, bustling, a bit chaotic, wonderfully diverse, full of character – and Nine Elms currently comes up short in that department.

It’s still finding its feet, though, and there can be no denying the impressive scale and rapid speed of the project. It has also brought an industrial wasteland back into use, with an increased amount of public space.

As Johnson says, people used to say ‘where?’ whenever Nine Elms was mentioned, but that won’t be the case for very much longer, with the area now firmly on the map.

The next part of the series will focus on the redevelopment of Television Centre and the wider regeneration of White City.