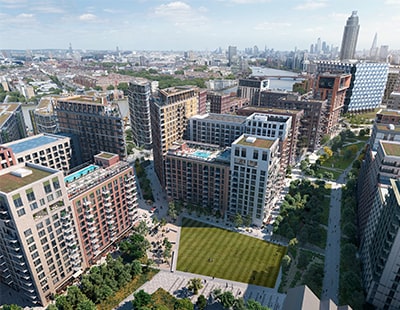 European investment platform Henderson Park and leading Build to Rent developer Greystar have announced the acquisition of a site at the former Royal Mail depot in Nine Elms, South London for £101 million.

The plan is to develop the site into an 894-home Build to Rent residential scheme, as the companies continue to build their private rented sector portfolio. The development is being fully funded with equity from Henderson Park and US giant Greystar alongside a £385 million, six-year whole-loan facility provided by investment firm Cain International.

The latest acquisition is the fourth joint venture investment Henderson Park and Greystar have made in London, extending their portfolio in the capital to nearly 2,000 apartments.

Planning permission for the development was granted in March 2019, and is set to be one of the largest purpose-designed Build to Rent developments in the UK.

The joint venture has also entered into a full design and build contract with Telford Homes, who will start construction this month and deliver the project in multiple phases, with the first homes expected to be delivered in 2022 and full completion by 2024.

Situated in a prime location in the Battersea Nine Elms regeneration area – which includes the ongoing transformation of Battersea Power Station - the development will provide 641,000 sq ft of residential space across two distinct buildings, including a mix of studios, one, two and three-bedroom apartments.

In addition, the scheme will include 25,000 sq ft of ‘best-in-class tenant amenities’ - featuring two rooftop swimming pools - and will also comprise 25,000 sq ft of retail and community space, set amongst landscaped gardens.

The buildings will be a stone’s throw from both the new Nine Elms and Battersea Power Station London Underground Zone 1 stations, which form a key part of the Northern Line extension.

It will also sit next to the proposed Linear Park, which runs across the entire length of the regeneration scheme, while both the new US Embassy and the Battersea Power Station redevelopment will be nearby.

Just two years after their first joint venture, Henderson Park and Greystar have rapidly built a substantial portfolio of privately rented homes across London, aiming to cater to a diverse demographic of tenants. As well as the Nine Elms development, Build to Rent schemes are also under construction in Walthamstow and Croydon, while a standing portfolio of apartments are already located in Aldgate, Fulham and Nine Elms.

It was recently revealed that Greystar, which focuses on investment management, development and property management of rental properties globally, has launched a £750 million fund to target the UK’s rapidly expanding Build to Rent sector. The company plans to raise the equity from pension funds and insurers and, when including debt, could have nearly £2 billion to invest in Build to Rent schemes.

Earlier this year Property Investor Today explored whether Build to Rent is the answer to the country’s housing crisis with a visit to Tipi’s latest development in Wembley Park.

“We continue to look for further opportunities to invest in this undersupplied sector and bring forward new developments, helping satisfy the city’s growing demand for high-quality and professionally managed rental housing. This deal also extends our commitment to the Battersea Nine Elms area, a hugely exciting part of London which benefits from a prime Zone 1 location, major infrastructure investment and the fact that it is fast becoming established as a vibrant new community for Londoners.”

Mark Allnutt, senior managing director UK of Greystar, said that they were excited to be ‘moving ahead at speed with construction at Nine Elms after receiving final approval for the site’.

“This marks a significant milestone for our growth in the UK and further consolidates Greystar’s position as one of the leading Build to Rent developers in London,” he added.

“The London market is significantly under-supplied when it comes to these types of developments, and existing rental homes are often outdated or poorly managed. This development at Nine Elms will ensure we continue to be part of London’s housing solution, creating thousands of much-needed, high-quality homes for an ever-increasing number of renters.”

Where do you see BTR in five years? 'Bigger', says former UKAA CEO ...

Dave Butler recently stood down as the CEO of the UKAA...