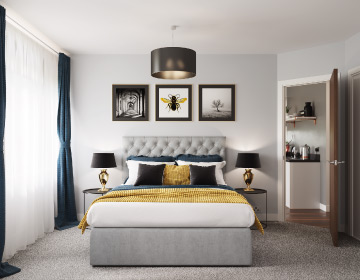 A new residential scheme for Erdington, has been given the go ahead. SevenCapital has been granted planning permission to transform a nine-storey former office block, located on Orphanage Road, into a development of 84 luxury studio, one and two bedroom apartments.

Nexus Point, the name of the development, is situated opposite the recently refurbished leisure centre and just a short walk from Erdington High Street. It is the first stage of a wider regeneration plan for the site which SevenCapital acquired in late 2017.

Nexus Point will offer 64 one bedroom apartments, with the remaining apartments consisting of 16 two beds and five studios.

Andy Foote, director at SevenCapital said: “The popularity of city centre apartment living in Birmingham has grown significantly over the past five years, and with a continued undersupply versus demand for housing in the city, this will start to cause a ripple effect into surrounding suburbs, such as Erdington.

“Nexus Point is our first planned step towards regenerating this area of the town since we bought the site from Sainsbury’s last year and will offer all the luxury of a SevenCapital city apartment. Being just a 12-minute train commute from the centre of Birmingham means the development will be ideal for commuters who prefer to live away from the hustle and bustle of the city as well as those who desire a city centre style apartment with affordable pricing.”

Nexus Point is now available to buy from just £99,950 with work anticipated to complete at the end of 2019.