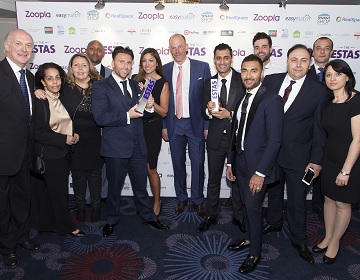 ONE of the fastest growing property companies in London has been voted the best letting agency in the UK after its customers turned out in droves to commend it.

Caridon Property triumphed at the industry equivalent of the Oscars; the ESTAs. The business won the prestigious title of Best Letting Agent in the UK in a category voted for by tenants.

Directors from the company were awarded the accolade at a glittering event in London’s Grosvenor House Hotel which was hosted by Location Location Location presenter Phil Spencer and was attended by over 800 people from the property industry.

Caridon Property, part of the Caridon Group, also won the award for best letting agent in the South East. Over 150 of Caridon Property’s tenants voted in the run up to the awards, rating the company on factors such as customer service, communication and quality of accommodation.

The ESTA accolades come less than a month after Caridon Property won another prestigious award. In March the Croydon-based business won the Making A Difference title at the London Landlord Accreditation Scheme annual awards. The event honours reputable, accredited landlords in the Capital and is run in conjunction with the Mayor of London’s Rental Standard campaign, which aims to promote good standards in the property rental sector.

Caridon Property was awarded the LLAS prize by a panel of judges who were impressed by the company’s commitment to helping people in the South East. In one notable case Caridon Property helped find a permanent home for a man who had been homeless and sleeping rough in a park for six months. In another case the company helped find a home for a person who had been sleeping in a hospital A&E waiting room in order to keep out of the cold.

The company was established in 2009 by entrepreneur and CEO Mario Carrozzo and was one of the first to offer landlords the concept of guaranteed rent. It has since grown to become a multi-faceted property group which also builds housing developments. Last year it attracted a £50 million investment fund and now builds and manages property across the South East.

Last year the company just missed out on the national award at the ESTAs, coming second.

Caridon Property Managing Director Akeel Alidina comments: “Last year we got the Silver Award and it had been bugging me the whole year that we just missed out on Gold! I’ve been waiting for a chance to go one better and it was a real honour to get the top award.

“The company has worked hard all year to provide excellence and great service and hopefully this shows by the positive feedback from our tenants. We pride ourselves on providing great services and quality housing for people at all levels. It’s becoming increasingly difficult for people to find good quality affordable housing in the south east and these awards show that we are doing something positive to change that. There is no better testimonial that a vote from the tenants we service.”

Please visit our site www.caridonproperty.co.uk or give us a call on 0203 728 9933 for more information to see how we can assist you.