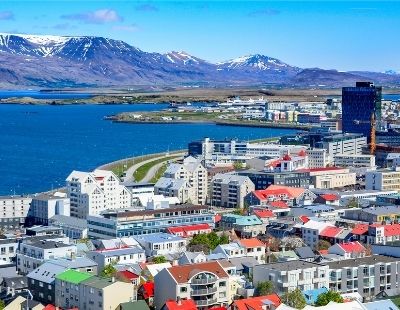 Across the world, travel restrictions continue to ease. This is exciting news for Brits hoping to enjoy a holiday, live, or work abroad during the summer.

Since the Covid-19 outbreak, remote working has become the norm for people across the country. Anyone looking for a change of scenery could choose to work abroad. Or if after months of lockdown you are looking for an escape, now is an opportunity to live abroad.

Spain, France and Portugal, all close to the UK, have been popular choices with overseas buyers. However, recent findings from Property Guides show that other European countries are of interest too.

Property Guides, an overseas property resource, has gathered a list of profitable and emerging destinations that may be of interest to expats.

High salaries in the capital of Iceland

Reykjavik, the capital of Iceland, may be of interest to someone hoping to work abroad as the salaries are generally higher than other European cities such as Madrid and Rome. Workers in Reykjavik earn on average over £1,000 more each month compared to these cities.

There is a lot to do in the capital of Iceland as it has plenty of bars and restaurants as well as over 60 museums, exhibition spaces, and galleries to explore.

In Iceland, almost all electricity is hydropower or geothermal, which makes it some of the cheapest in Europe. The average monthly rent in the city is around £1,100 for a one-bedroom flat and there is a strong market for Airbnb rentals too. If you’re looking for a good investment, Reykjavik could be the place for you.

Like Reykjavik, salaries are also reasonably high in Helsinki, Finland's picturesque capital. Properties across the city cost around £7,048 per square metre. To rent a one-bedroom flat will cost around £862 per month.

Helsinki is a contemporary city with easy transport links to the rest of the country, Europe, and beyond.

According to the online travel index Expatistan, the cost of living is cheaper in Tallinn than 63% of cities in the world. To rent a one-bedroom flat is only £402 and public transport is also free of charge so those hoping to live in the city will have extra cash in their pockets to spend. Despite house prices rising by around 4.9% in 2020, properties are still affordable at around £1,799 per square metre.

At face value, Tallinn may appear ancient or old-fashioned, but it is quite the opposite. Tallinn is an advanced tech hub with the third-most start-ups per person in the whole of Europe. The city also has seven ‘unicorns’ which are start-ups with a value of over £720,000, making it a city of opportunity for those hoping to find work abroad.

Consider working at a start-up in Gdansk

Similar to Tallinn, Gdansk’s job market consists of numerous start-ups - however, salaries are not as high as in other European cities.

The cost of living in the Polish city is inexpensive, meaning expats working remotely for companies elsewhere will find they can afford more in Gdansk than in other Western European cities. For example, the average home in Gdansk costs just £1,650 per square metre.

Those hoping to move to the city will have to opportunity to enjoy the museums, amber shops, restaurants, bars, and cafes.

Research before you book

Travel uncertainty is still pertinent as the Delta variant raises concern, given the fact it even poses a threat to those who are fully vaccinated.

The government state they will conduct regular reviews to the travel light system every three weeks. Staying informed about the latest travel news is crucial to ensure you pick the correct destination.