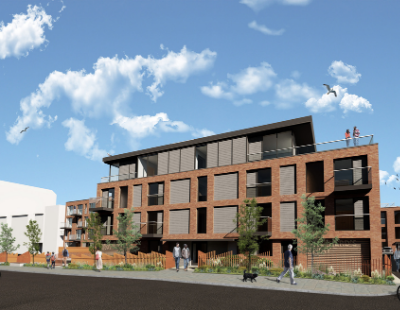 Construction work on a set of new riverside apartments in North Tyneside has begun.

The £10 million development, Shepherds Quay, will be on the site of a former rubber factory on Clive Street, at the North Shields Fish Quay, and will look east over the River Tyne to the pier walls.

It will comprise 49 apartments and one townhouse in three complementary blocks, designed by Newcastle-based Napper Architects.

The scheme is being funded jointly through developer Ian Stewart’s UKQ Clive Street venture, along with Next Level Developments (part of housing association group Karbon Homes) and the government’s Homes England agency.

The high-specification homes will be in landscaped grounds, with off-street parking and an attractive frontage with benches for public use facing Clive Street. 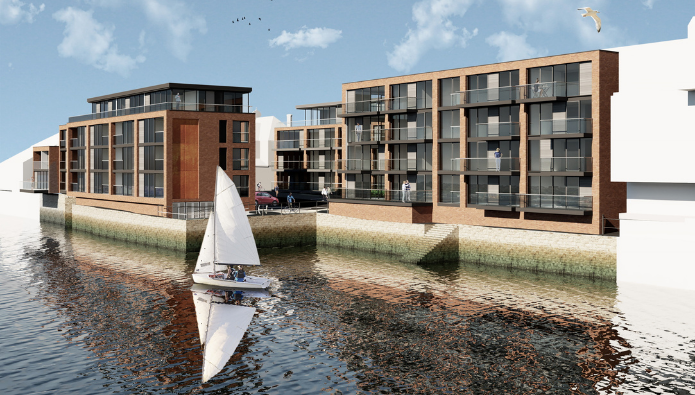 “Shepherd’s Quay will be a stylish development that sits right on the riverfront in an area that offers cultural experiences, vibrant restaurants, bars and coffee shops with something for everyone to enjoy,” Stewart comments.

“I am delighted that it is finally underway and believe that it will add significantly to the area by providing quality homes in the most attractive of settings.”

Sarah Robson, development director for Karbon Homes, adds: “It’s a great opportunity for Next Level Developments to get involved in this ambitious, high-quality development.”

“This is a first-class site which we’re confident will provide fantastic homes with amazing views. Supporting a market-driven project like this means Karbon can re-invest in our development programme elsewhere in the region which will deliver around 500 new affordable homes this year.”

Churcham Homes has laid the foundations for a luxury housing estate on the site of a former World War Two US military hospital.

The property developer will create 26 uniquely designed family houses after agreeing £10.6 million in development finance provided by specialist lender Together.

The site at Ullenwood Court, Coberley, near Cheltenham, was initially developed as a series of military hospital buildings in 1943 to treat American casualties from Operation Bolero - the build-up to the allied invasion in Europe - in 1943.

The new development of four, five and six-bedroom contemporary homes is surrounded by rolling Cotswolds countryside and lies in a 34-acre plot next to an underground Cold War military bunker, to be used if there was a nuclear strike on Britain. 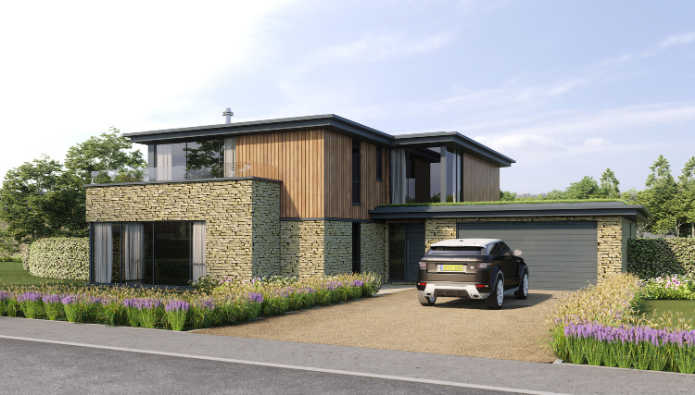 Churcham Homes employed historical and archaeological experts to document and photograph the history of the site, in recognition of its past as a military hospital. After D-Day, the complex became an army reserve training base until many of the original buildings were demolished in the late 1960s and it has housed a small industrial estate in recent years.

The reinforced concrete bunker, which backs onto the housing development site, was originally used as an anti-aircraft gun base and is now under private ownership.

Churcham’s luxurious new homes will include indoor ‘endless’ swimming pools and saunas, en-suite bathrooms, cinema and gym rooms, and green roof terraces. It says the estate will be worth more than £45 million once building is complete.

Stuart Hall, a director at Churcham Homes, comments: “We have now started to put in the foundations for these large family properties.”

“Each type of home is subtly different, but all will be built to the highest specifications, with a really high-quality finish and state-of-the-art technology. They are in a superb location with great views over an area of outstanding natural beauty, and we expect them to be extremely popular when they go on the market.” 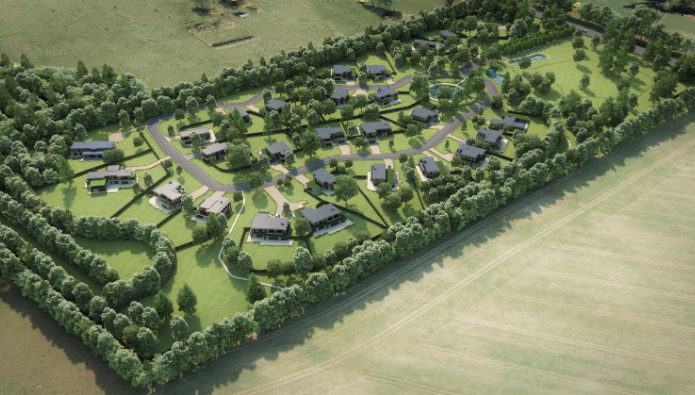 Together provided an initial short-term bridging loan for Churcham to buy the brownfield site and a development finance facility for the construction of the new housing estate.

Jonathan Sally, a spokesman for the specialist lender, says: “The area undoubtedly has a very interesting past. However, from the time we first saw these proposals for this fantastic new scheme, we were even more excited about its future.”

“As a specialist property lender, we’re proud to be able to provide the finance for developers to seize the opportunity to buy disused sites like Ullenwood Court, and to realise their ambitions by creating beautiful places for families to live.”

He adds: “We’ve been really impressed by Churcham Homes’ vision and the quality of the work they’ve already carried out.”

The development, which is located adjacent to the University of Nottingham’s Jubilee Campus, will consist of 661 cluster flats with en-suite bathrooms and 39 studio apartments.

The total development costs will be £57 million, with the scheme set to open in time for the 2023/24 academic year.

The scheme aims to be net-zero carbon once open, running on 100% renewable electricity with solar panels installed on the roof and an all-electric heating system, including air-source heat pumps. 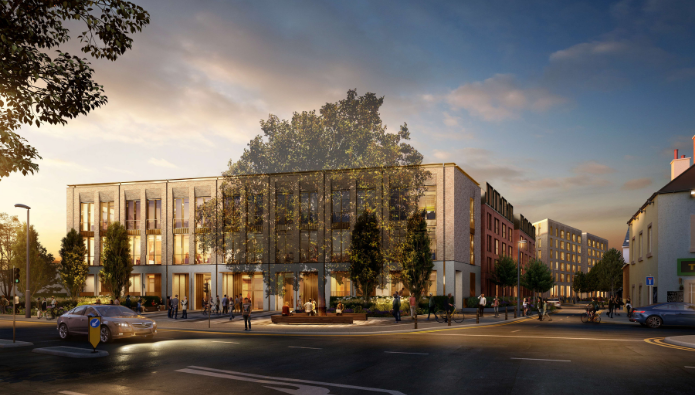 The new complex, which is a former car showroom site, will also provide a commercial building for external use. Additionally, there will be extensive green public open space, as well as substantial biodiversity improvements to the land around the property, with improved access to the River Leen.

Nick Hayes, group property director at Unite Students, comments: “We are delighted to have secured planning approval for this exciting development, which allows us to deliver high-quality student accommodation that complements the surrounding area.”

“The development supports our strategy of increasing our alignment to the strongest universities and will help to deliver operational efficiencies through greater scale in Nottingham.”

Legal & General Affordable Homes has increased its development pipeline to 5,500 homes across the UK, with a gross asset value of nearly £1 billion.

According to research, 7.6 million people in England had at least one major housing problem relating to overcrowding, affordability or poor-quality housing going into Covid.

Compounded by the pandemic, one in three low-income earners have had to borrow money to pay their rent and the steep decline in social housing has led to huge increases in government welfare costs, as well as rising homelessness. Some 1.4 million households remain on the waiting list for affordable homes in the UK.

In response to this, Legal & General has accelerated the delivery of its pipeline to target the areas which need it most.

So far, the provider has secured 1,000 new homes in the capital, most recently contracting on 174 homes in Hammersmith and Fulham. Some 50% of these will be targeted to lower income households, in line with the council priority income groups.

The affordable housing is part of a 1,800-home scheme, redeveloping the former M&S distribution centre, which is due to hand over in mid-2022. Other schemes in London include 76 homes in Hounslow, 213 rented homes in Wembley, 90 rented homes in Lambeth and 127 rented and shared ownership homes in Tower Hamlets.

Ben Denton, chief executive at Legal & General Affordable Homes, comments: “The pandemic has affected every corner of our lives and had a major impact on what we need from our homes, workplaces and communities. In particular, it has brought into even sharper relief the urgent need to provide stable and affordable homes for millions of households on low incomes.” 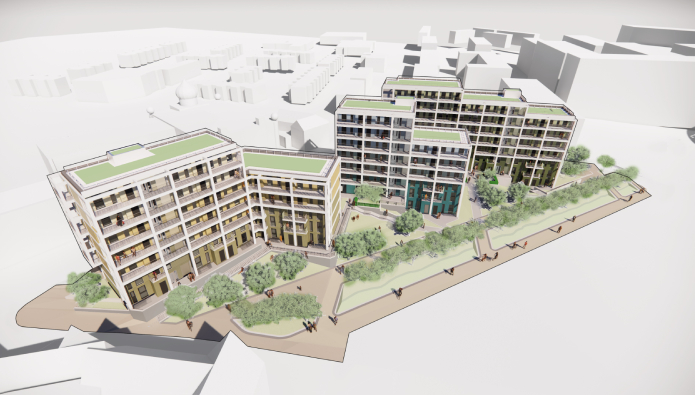 “Since launching two years ago, Legal & General Affordable Homes has grown its development pipeline to 5,500 homes throughout the country to help meet the needs of local communities.  We remain committed to deploying institutional capital at scale to address one of our greatest societal failings.”

The move aligns with Legal & General Capital’s (LGC) appointment of Wes Erlam as director of urban regeneration. Joining in April, Erlam will bring over 20 years of experience in land, development, investment and mixed-use regeneration.

In this new role, Erlam will oversee all LGC’s direct investments in urban regeneration as they continue to expand, evolve and mature, and will help further bolster its capabilities in creating like-minded joint ventures and public/private partnerships.

Currently invested across sixteen UK towns and cities, Legal & General is involved in some of the UK’s largest urban transformation schemes and is funding the next generation of science and innovation centres, which have proven crucial in response to Covid-19.

Commenting on his appointment, he says: “I am delighted to be joining a business that I regard to be the most innovative and forward-thinking investor in the UK. As a leading force for change in the built environment, Legal & General has established an incredible range of genuinely transformational regeneration projects.”

“I look forward to working with the existing public and private sector partners across the portfolio, whilst also seeking to expand the reach of the business into new locations.”

“We are investing billions of pounds in this way across the UK, in places such as Oxford, Manchester, Newcastle, Sheffield and Cardiff, working with local authority partners, as well as central government bodies and world-leading universities. But as our platform expands, so do our ambitions. Wes will lead this next stage of growth and delivery.”

Unite – one of the largest providers of student beds in...

Unite Students, one of the UK's most prolific providers of student...