Along with Birmingham, Manchester has become the biggest investment hotspot outside of London in recent years as it has emerged from its post-industrial decline to become a city of culture, music, startups, new media and trendy shopping districts.

From post-war concrete skyscrapers to 'gleaming glass towers of all shapes, sizes and cloud-brushing heights', the last 60 years have seen Manchester’s skyline change beyond all reason.

Some have welcomed Manchester’s increasing prosperity and economic boom, but others have been much more critical of the creeping gentrification of the city – something that is being explored in the BBC Two factual series ‘Manctopia: Billion Pound Property Boom’, which meets people living and working in the eye of Manchester’s remarkable housing growth.

Alliance Investments, a subsidiary of Property Alliance Group, has taken a detailed look back at the rapid growth of Manchester in recent decades and offers a sneak peek into the future of the city’s 'high-rising horizon'.

A rapid rate of growth

Manchester’s post-war building boom, which kickstarted in the 1960s and continued through to the late 1970s, witnessed an array of new skyscrapers being added to the city’s previously low-level skyline.

This included the construction of the 25-storey CIS Tower in 1962 – the tallest building in the UK at the time – and the arrival of the 21-storey Arndale House in 1979.

There followed a relative period of inactivity until 2006 when the city’s most noteworthy period of growth commenced, being the year that marked the arrival of the iconic Beetham Tower, knocking the CIS Tower off its top spot as Manchester’s tallest building – a title it had held for an impressive 44 years.

From this point onwards, Manchester started a steep upward trajectory of tall building construction projects, with over 25 buildings of more than 20 storeys added to the skyline over the last 14 years. That's compared with only six in the previous 45 years pre-2006.

Alliance Investments also found that since the 1960s post-war building boom began, Manchester’s tall building construction projects have added over 1,400 floors of office and residential space to the city, with a collective height of over 4,500 metres. 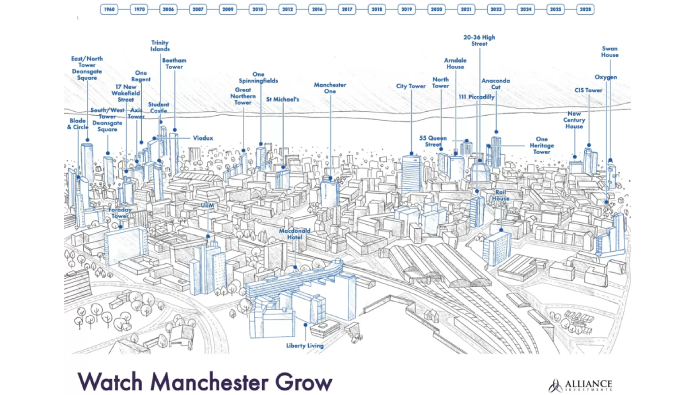 This heritage, along with more recent ones based around football, music, food and culture, has created several distinct areas. Many of these areas have histories and past uses that fell away as the years progressed, leaving behind entire neighbourhoods in need of regeneration.

Key areas across the city have seen intensive regeneration projects, with initiatives including the 'historically industrialised' Piccadilly Basin, Ancoats and Castlefield, all of which have experienced dramatic transformations while still maintaining key elements of their heritage and character.

The Manchester map has also seen the appearance of entirely new neighbourhoods which have creatively repurposed the city’s formerly disused and forgotten industrial sites.

“These vibrant new areas include the likes of NOMA in the Northern Quarter, at the heart of which sits the iconic One Angel Square development, along with Salford’s residential Greengate neighbourhood, featuring the recently built Anaconda Cut apartment tower,” Alliance Investments said.

Here, the company takes a closer look at how this ever-changing city has evolved over the decades by profiling some of its best-known architectural highlights.

The introduction of a series of post-war skyscrapers took place in these decades, that began adding 'never-before-seen height' to Manchester’s skyline. The most significant buildings that appeared as part of the city’s first tall building boom are outlined by Alliance Investments below.

Built to serve as the prestigious headquarters of the Co-operative movement in Manchester, the CIS tower remains to this day one of the most recognisable buildings on the city’s skyline. It’s now a Grade-II listed building and gets its iconic blue colouring from the addition of energy-generating photovoltaic panels, installed as part of its extensive renovation in 2004.

Originally known as St Andrew’s House and then Portland Tower, Manchester One was among the first high-rise buildings to be erected in Manchester in the 1960s. The west side of the Manchester One tower was famously painted bright yellow to display the logo for the 2002 Commonwealth Games.

Formerly known as Highland House and originally built for the Inland Revenue, North Tower technically belongs to the city of Salford – and is one of that city’s tallest buildings. It was converted from commercial use between 1998 and 2000, with the top 12 floors now used as apartments and the remaining lower floors a Premier Inn hotel.

Sitting smack bang in the city centre above the famous Arndale Shopping Centre, Arndale House is another of Manchester’s most iconic and instantly recognisable pieces of ‘70s architecture.

At the turn of the Millennium, Manchester’s building boom took another steep upward turn after a relative period of inactivity. Here are a few of the high-rise highlights from this fast-moving decade:

One of Manchester’s most famous buildings, Beetham Tower (widely known as the Manchester Hilton Hotel) has dominated the city’s skyline since its construction topped out in 2006. Though it has since been overtaken in height by the Deansgate Square development, Beetham Tower stands at an impressive 47 storeys tall.

The sloped silhouette of this modern apartment building stands 72 metres tall at its highest point. It took six years from its proposal in 2001 to completion in 2007, and is a purely residential development clad in sleek glass and metal tiles.

As the Noughties were replaced by the 2010s, the rate of tall building growth in Manchester took an even steeper upturn, with a new focus on residential developments.

One Angel Square is the landmark head office of the Co-operative Group. While only 15 storeys high, what this building lacks in height it makes up for in architectural style and zero carbon emissions status. The building generates its power and heat using a rapeseed oil biodiesel, while the building’s shape has been compared to a ship and even a sliced egg.

A fairly recent addition to Manchester’s collection of residential high-rise buildings, One Regent offers 28 floors of apartments on the River Irwell. The 82m building sits just on the edge of Manchester’s border with Salford in the historic Castlefield area.

The Anaconda Cut is a 44-storey residential building in the Greengate area of Salford. The name ‘Anaconda’ comes from the stretch of the River Irwell that the building sits beside, while ‘Cut’ comes from a little-known but highly innovative flood prevention project carried out in the area in the 1960s. Now the tallest building in Salford, Anaconda Cut is easily recognisable by its unique green colouring.

‘Perched seamlessly’ over the Rochdale Canal in the lively Deansgate Locks area, Axis Tower offers 20 floors of high-end living space and unobstructed views of the city below. Offering premium penthouses and apartments from 1-3 bedrooms, Axis Tower stands out with its unique bronze metal cladding and one of Europe’s largest digital advertising screens built into its north face.

Manchester’s building boom shows no signs of stopping or even slowing in the here and now. Here’s a sneak peek at what’s in store for the city’s skyline.

Once completed, Oxygen will become Manchester’s very own ‘vertical village’, offering both accommodation and living amenities in the city’s Piccadilly Basin area. This unique three-step building design will stand 150m high with 32 storeys of premium real estate. A combination of 345 apartments and 12 family townhouses will be surrounded by landscaped communal outdoor space.

Scheduled for completion in 2023, the Swan House development is the latest project from Beetham Tower architect, Ian Simpson. Planned for a site on the corner of Swan Street and Rochdale road, this red brick and glass structure will stand 31 storeys high.

Plans for this 55-storey residential tower were given the green light at the start of 2020 and, once completed, will become Salford’s tallest building ahead of Anaconda Cut. Located in Salford’s rapidly growing Greengate area on the edge of Manchester City Centre, One Heritage Tower is set to stand at 173 metres high and will cover a total of 10,225 sq ft.

A mixed-use development set to take over the site of the former police station and synagogue in Manchester’s historic core. Initial plans for this development had to be heavily revised due to public opposition over the risk to important buildings including the historic Sir Ralph Abercrombie pub.

Making up phase two of the Crown Street development project, these proposed skyscrapers have been dubbed the ‘Blade’ and the ‘Circle’. Both set to be 51 storeys high, the ‘Blade’ will be rectangular in shape with curved sides, while the ‘Circle’ will be cylindrical in shape. If approved, the development will also comprise a primary school, a public park, a gym and private gardens.

“From 1960 to today, Manchester’s skyline has already changed practically beyond recognition. And with so many new developments already planned for the near future, we won’t have to wait long before we see the next generation of exciting new architecture make its home in this incredible, ever-growing city,” Alliance Investments says.

You can interactively watch Manchester’s growth by clicking here. Or watch this short video.