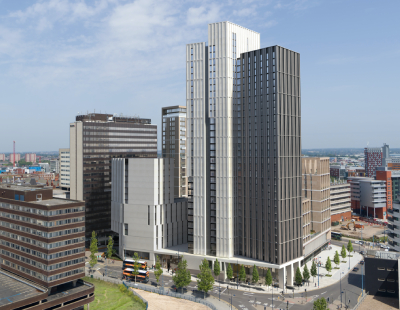 Property developer Nikal recently announced that it has signed contracts with Grainger plc for the latest Build to Rent scheme to hit Birmingham.

The partnership between Nikal, founded by Nick Payne and Alan Murphy in 2003, and Grainger, the UK’s largest listed residential landlord, will lead to the delivery of a 375-home BTR development at Exchange Square 2 in the UK’s second city.

The new development at Exchange Square, which is being designed by Stephenson Studio, is located opposite HS2 Curzon Birmingham. Exchange Square is set to become an important visual landmark once the HS2 line is up and running, with hundreds of thousands of people potentially being welcomed to the city every day.

The future of the HS2 scheme was in considerable doubt for quite some time, but earlier this year Boris Johnson greenlighted the ongoing completion of the project, the largest infrastructure scheme in Europe, which will connect London to Birmingham, Manchester and Leeds.

The delayed first phase - a new railway line running between London and the West Midlands, carrying 400m-long trains with as many as 1,100 seats – was initially set to be completed by the end of 2026, but the start date has now been pushed back to between 2028-2031. The project may be further affected by the coronavirus pandemic, which has led to a dramatic fall in the number of people commuting by train.

Once ready, the line is set to offer trains which can reach speeds of up to 250mph, with services running as often as 14 times an hour in each direction. The capital’s main HS2 hub will be London Euston, with one stop at the planned Crossrail/HS2 super-station at Old Oak Common in North West London before the line reaches Birmingham Interchange and Birmingham Curzon St.

Phase 2 - originally set to be finished by 2032-33, but now set to open between 2035-40 - will link Birmingham to Crewe, Wigan and Manchester in one direction and an East Midlands Hub and Leeds in the other.

Andrew Saunderson, director of investments at Grainger, said: “We are delighted to progress on our Exchange Square development, our second Build to Rent scheme in Birmingham. The Exchange Square location makes it attractive and convenient for renters in the city, and we look forward to seeing this landmark scheme progress.”

The formal completion of the agreement concludes the appointment of leading design and build specialist McAleer & Rushe as main contractor on the scheme. Works are set to commence on site this week, with completion scheduled for summer 2023. 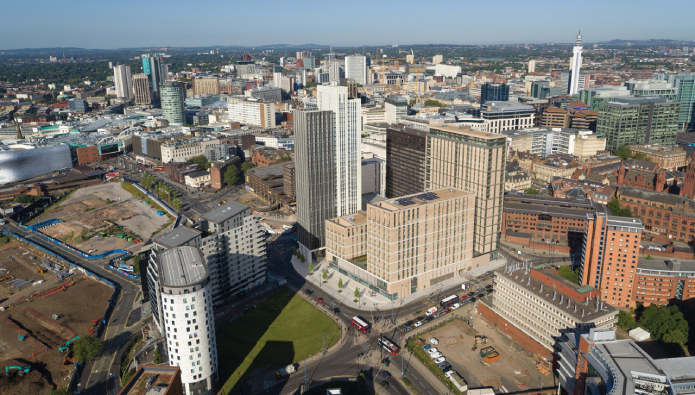 Grainger’s development, along with half-an-acre of new public realm known as ‘Exchange Square’, will form the first stage of works on the last phase of this development. A second stage is set to deliver a 15-storey, 235-bed Premier Inn Hotel and 6,000 sq ft Bar+Block Steakhouse Restaurant, both pre-let to Whitbread, as well as 7,500 sq ft of high-quality retail space.

Exchange Square Phase 2 is described as the next phase in Nikal’s ‘dynamic £350 million urban village’. Phase 1, made up of 603 BTR apartments across three buildings of seven, fourteen and twenty-seven storeys, was completed last November.

Nick Payne, Nikal’s co-founder and managing director, said: “We’re so proud of what we have achieved to date in Birmingham. We started with dreams and derelict land, and to see ambitions transformed into thriving busy communities that people can call home is why we do what we do.”

He added: “This next chapter in our Masshouse story is our most ambitious to date, and we could not have asked for a better partner in this project than Grainger. Their foresight, passion and dedication to creating a sense of place and community, whilst providing high-quality homes for all, is admirable.”

James Mannix, head of residential development at Knight Frank, commented: “This deal is a huge vote of confidence for the BTR sector and for Birmingham. Nikal is emerging as a key delivery partner for this sector and Grainger is continuing to curate one of the best institutional grade rental portfolios in the country. Knight Frank research shows that through careful and considerate tenant care during this crisis, institutional landlords have continued to collect close to normal levels of rent through the period.”

Nikal has been a major contributor to modern Birmingham since 2003, after being awarded the opportunity to regenerate ‘Masshouse Plot 7’. This was a site created by the removal of Masshouse Circus, the ‘concrete collar’ ring road that was restricting the expansion of Birmingham’s city core. 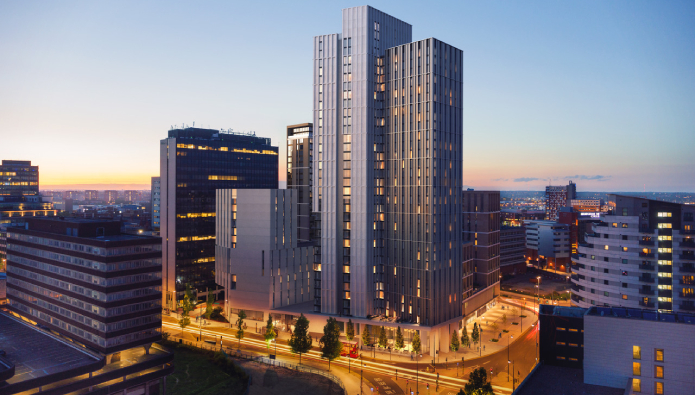 At the time, the deal was described as ‘ground-breaking’, marking the first time an institutional fund had forward-funded a BTR development of this scale outside of London. “It acted as a catalyst for other PRS development in the city,” the company says.

For more information on Exchange Square Phase 2, you can visit nikal.uk.com.