In a further sign of some sense of normality returning – albeit with many new restrictions and protocols remaining in place – Spain reopened its borders to Brits on Sunday after a special arrangement was struck between the Spanish and UK governments.

It means British holidaymakers, second home owners and prospective buyers of Spanish properties will no longer be required to quarantine upon arrival in Spain – although they will still have to isolate for 14 days when returning to the UK, while Spanish tourists and visitors to the UK will have to do the same.

Along with Italy, the US, the UK and Brazil, Spain has suffered one of the worst outbreaks of coronavirus of any country in the world, with more than 293,000 cases and 28,000 deaths.

Its Prime Minister, Pedro Sanchez, placed the country under one of the globe’s most stringent lockdowns. For several months, people were only allowed out of their homes to buy food, and children were not even permitted to go outside for exercise.

Since late May, Sanchez has slowly relaxed the restrictions as Spain has got a greater handle on the virus, allowing the country to open up its economy, allowing children back to school in June and now reopening its vital tourism industry.

Late on Saturday, Arancha Gonzelez, Spain’s Foreign Minister, confirmed that British travellers would not have to quarantine despite the UK still making people arriving self-isolate.

She said the threat of quarantine was being lifted out of respect for the ‘410,000 Brits who own a second home in Spain’. Along with France, Spain is comfortably the most popular second home destination for UK residents, and it’s also one of Britain’s most popular holiday destinations year in, year out.

Those arriving in Spain won’t face Covid-19 tests, but they will have their temperatures taken using infra-red cameras. This forms part of a triple check which also includes recording their holiday addresses so the authorities can easily track and locate them if necessary.

The company surveyed 2,800 participants to find out why Spain is such a desirable destination and if the current major UK issues (for example Brexit and Covid-19) have affected their reasons for buying property abroad.

The survey found that 60% of participants want to buy a property in Spain by the end of next summer. When asked what represents their dream life in Spain, 73% of people said they want a healthier lifestyle, while 64% want a happy retirement and 49% want a new adventure.

Some 61% of those surveyed said they want a detached villa and would be willing to spend over £125,000 for it. Although 61% of respondents claimed to know they can keep their EU rights to residence and healthcare if buying property in Spain before the end of the Brexit transition period, 66% said they are not concerned about Brexit when considering buying property in Spain.

The survey also revealed who is buying in Spain, with 40% second or holiday home purchasers, 56% retiring or relocating and only 4% choosing to invest in a Spanish property. Promisingly, nine out of 10 people already have the assets or money to buy, while two out of three will use property specialist Smart Currency Exchange to pay for their property.

According to the data, most buyers (21%) are looking to the Costa del Sol and Costa Blanca – two popular havens for British holidaymakers and expats in Spain – while Costa Calida and Costa Almeria are other favourites (12% and 13% of buyers respectively). The Costa Brava, Costa Dorada and the Balearics are more niche choices among British buyers.

Notably, there is no interest in inland locations or the towns, villages and cities on the borders of France and Portugal as people instead look to buy where there is sea, beaches and plenty of tourist-friendly restaurants and bars – crucial for those looking to let their homes out throughout the year.

You can see the full Property Guides graphic here and reproduced below. 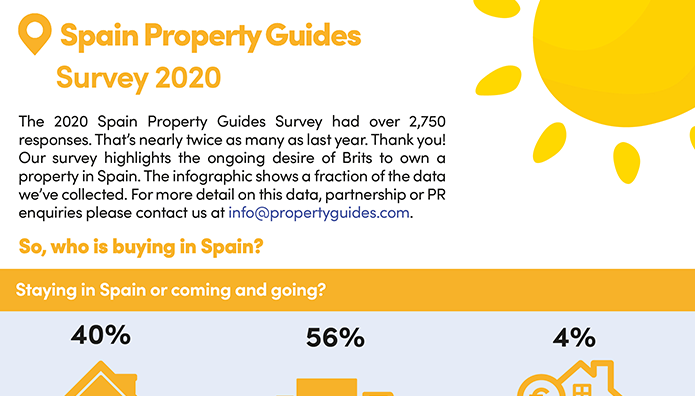 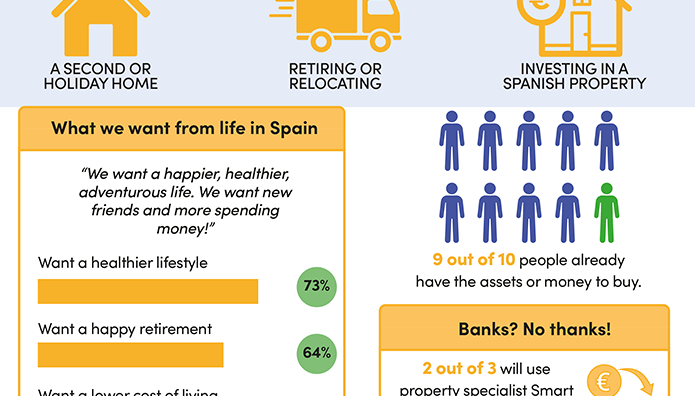 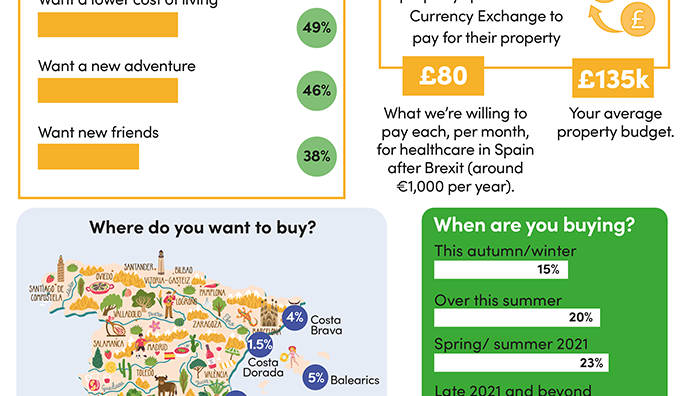 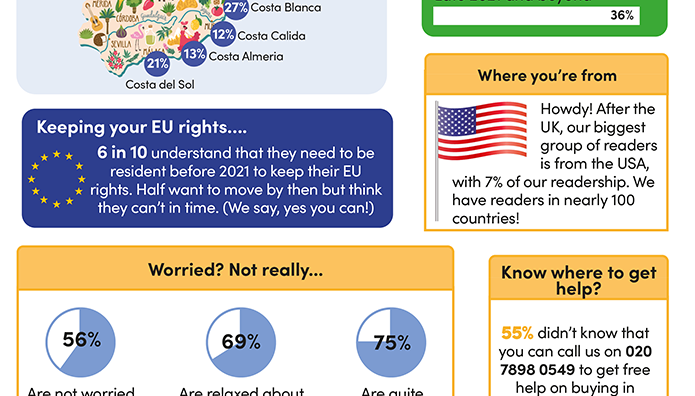 Christopher Nye, Senior Content Editor at Property Guides, said: “Our 2020 survey, conducted at the height of the lockdown, gathered 3,000 responses from property buyers looking for homes in Spain.”

“Despite Covid-19 and Brexit, Brits still want that dream home abroad, and many want it NOW! More than one in three buyers want to complete by the end of this year.”

He added: “What are they looking for? The biggest motivations were for a healthier lifestyle and a new adventure. They can afford it, too, even in a recession. More than 90% already have the savings or assets they need.”

Poll: Are you ready to invest in Spain again now that it's open to Brits?

Bouncing back – Brit buyers return to Europe after Covid and Brexit ...

Investors – would you swap time in your second home for stays elsewhere? ...

A property exchange company born out of the 2008 financial crash...