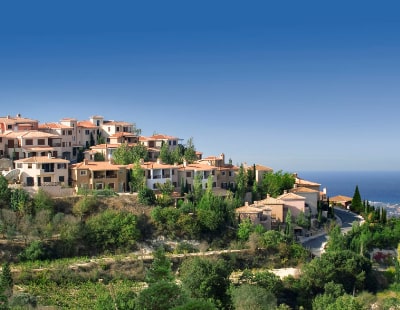 A leading Cypriot developer says it is still receiving daily enquires from Britain despite the Covid-19 crisis putting a temporary freeze on the domestic UK market.

Leptos Estates claims that, while enquiries are down compared to March 2019 figures, they are still coming in, largely focused on holiday homes with rental potential. This is a market that witnessed a rise in sales activity of 12% last year.

Commenting on interest from UK-based buyers, Pantelis Leptos, deputy president of the Leptos Group of Companies, said: “The UK is one of our strongest markets, with holiday homes in Paphos one of the most popular areas among our British clientele. Whilst activity has dropped significantly, we are still receiving serious enquiries on a daily basis from those looking for a second home once this crisis has passed.”

He added: “We saw a spike of interest from the UK at the beginning of the year when the Brexit process was confirmed, so this is likely still a driver in some people’s minds who want to keep a presence in the EU through residential investment.”

The citizenship and residency schemes on offer in Cyprus and Greece remain a big attraction for international holiday home purchasers and investors. In Cyprus, buyers can purchase through the Cyprus Investment Programme (CIP). In return for a property purchase of €2 million, investors will qualify for a Cypriot citizenship with the right to live, work, travel, stay and study in Cyprus as well as anywhere in the EU, and free travel to over 155 countries including Canada, Switzerland and Iceland.

The Cypriot passport only takes 6 months to come into effect and, once acquired, is valid for life. It also covers a person’s spouse and any dependent children up to the age of 28.

Separately, there is the option of permanent residency, which can be achieved through a property purchase of €300,000 in Cyprus and €250,000 in Greece. This option normally takes up to 60 days and, like the citizenship scheme, covers the entire family including the parents of both spouses. 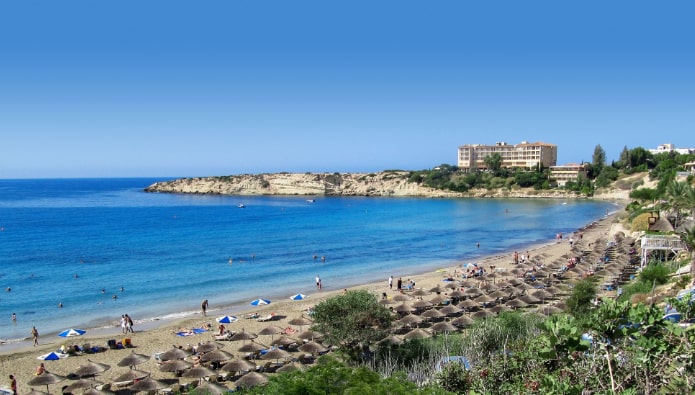 Leptos Estates says it is adapting to the travel restrictions put in place by numerous nations since the coronavirus outbreak, offering a number of ways for interested buyers to view properties. This includes video tours and virtual appointments with the sales team to showcase new homes and villas.

Leptos says it has also put in place a temporary offer for those looking to progress with the purchase of a new home in Cyprus, but who are unable to visit the country and finalise the agreement because of travel restrictions. The terms include:

The luxury holiday homes markets remains a key pillar of the Greek and Cypriot property markets, with sales growing in 2018 and 2019 by 5.8 % and 12.2% respectively. Although the countries are popular with European buyers, non-EU nationals made up the largest purchaser group, accounting for around half of total transactions since 2014.

Typically, sales were concentrated in Paphos and Limassol, with coastal villas and apartment complexes the most sought-after.

“The world is experiencing a unique situation that is impacting every industry, including the property investment market,” Pantelis Leptos added. “Despite this, we are still receiving serious enquiries and wanted to put in place something that would give purchasers the flexibility to complete a sale once it is safe and appropriate to do so. After all, people now, more than ever, want to enjoy their money, and keep property and residency options open in more than one country.”

To further attract buyers, Leptos Estates is offering several purchaser incentives for those buying up until the end of June (30/6/2020). This includes a free furniture pack, free travel to Cyprus (up to €2,000), free domestic travel covered for all property purchasers, free lawyers’ fees, free accommodation in five-star Leptos accommodation for the duration of a visit on completion, and a free Leptos Gold Card membership for all completed purchases

Leptos Estates properties are available with payment plans for a range of budgets, with some properties VAT-free.

Portugal is seeing significant growth in property prices in the face of global uncertainty, according to a report by a Lisbon-based property portal.

Imovirtual’s report shows that, despite the current global Covid-19 pandemic, which has created a wave of concern amongst the worldwide population (for both health and economic reasons), Portugal’s property market is displaying promising resilience.

Portugal, which shares a border with Spain, acted quickly and decisively when it became clear that the disease was spreading fast across the world. Marcelo Rebelo de Sousa, the President of Portugal, announced a state of emergency on March 18, leading the nation to practice social distancing measures with restricted access to public places and transport.

Like much of Europe, residents of Portugal are at a standstill whilst tourists have been advised to not visit for the duration of the pandemic – and only start coming again when it is safe to do so.

Stock markets, businesses and homeowners are experiencing a period of prolonged uncertainty. However, in the midst of the current crisis, asking prices of properties in Portugal continue to grow and increase at an encouraging rate.

Continued growth across the country

Compared to March 2019, Imovirtual reports that asking prices across Portugal have experienced a 12% increase, suggesting that Portugal’s housing market remains resilient even in spite of the Covid-19 pandemic.

The average asking price rose from €316,629 in March 2019 to €354,757 in the same period of 2020, with Evora (the capital of the famous wine-growing Alentejo region) and Setubal (situated on the coast just below Lisbon) contributing towards the highest growth in average asking prices announced. Although both Evora and Setubal recorded considerable growth in the space of the last 12 months, the two districts are not the most expensive destinations to live in.

For the highest average sale prices, we must turn, unsurprisingly, to popular locations such as Lisbon and the Algarve’s Faro district, where the average sale price is €573,021 and €454,030 respectively. By contrast, Castelo Branco (€119,947) and Beja (€130,719) are the destinations with the lowest property prices. 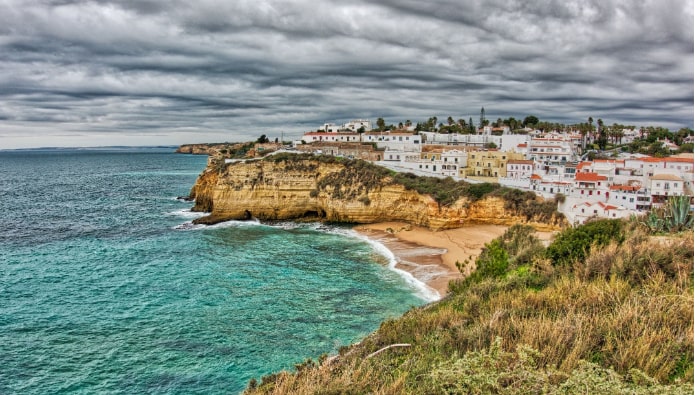 Portalegre, near the Spanish border, witnessed the largest fall in average property price in Portugal, reporting a 12% drop in comparison to last year’s figures. Despite house prices dropping, Portalegre was home to the highest average price growth in rental properties, with a 26% increase in the last year. As a result, tenants face an average rent of €390 per month.

While house prices have increased across Portugal, the average price of rental properties has declined by 8% in comparison to this time last year. Lisbon and Porto, Portugal’s two largest cities, are home to the highest average rental prices, €1,595 and €1,156 per month respectively.

The districts with the lowest average price for rent are Guarda and Castelo Branco, at an average of €366 and €387 per month. Faro and Braganca, meanwhile, reported the largest percentage reduction when it comes to average rent, with a decrease of 26% (€838) and 22% (€393) respectively.

An upward trend between February and March

Lockdown measures and financial uncertainty have completely transformed public spending habits and behaviour since governments across the world acted to combat the rapidly rising number of coronavirus cases.

Due to the persistent spread of the virus, the potential of a global housing crisis has been a topic of conversation amongst numerous nations. Portugal has, however, noted an increase in asking prices of properties since February 2020, despite the intensity of the global pandemic. 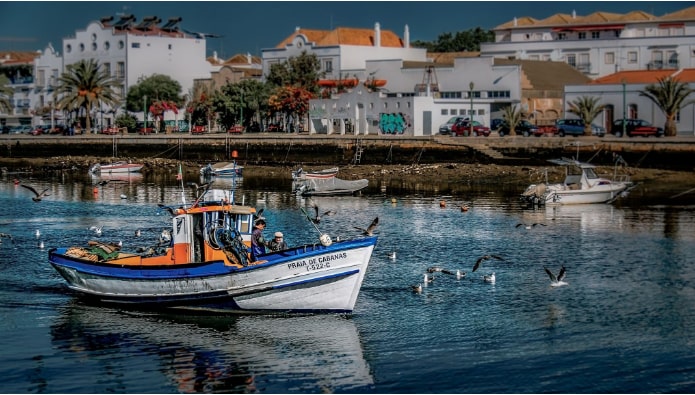 Districts such as Setubal, Faro and Braga also experienced an increase in asking prices between February and March 2020, confirming the pattern in Portugal for robust growth despite the severe challenges posed by the pandemic.

In the rental market, Imovirtual reports a moderate increase in prices per month since February 2020. Average rental prices in the nation reached €660 in March, up from €655 in February. Locations such as Lisbon and Braga saw an increase in rent prices, with growth of 2.4% (€1,595) and 3.4% (€763) respectively.

Although the coronavirus has caused major disruption to ski resorts across Europe, the development of Andermatt, through the £1.2 billion Andermatt Swiss Alps project, is still going ahead as planned.

In recent days a new landmark has been reached, with construction commencing on the 29 apartments across the 11th and 12th apartment houses of the development – Arve and Enzian. Hand-over to buyers is currently anticipated to take place in autumn 2021.

Andermatt Swiss Alps says it has implemented safety measures to safeguard all construction workers during the coronavirus outbreak.

The wider development of Andermatt – located in the spectacular Ursern Valley, a short drive from Zurich, Lucerne and Milan – has already witnessed ten ‘unique and individually designed’ apartment houses built (most of which have already sold). Meanwhile, two hotels – the five-star Chedi Andermatt and the four-star Radisson Blu Hotel Ruessen – have also been completed.

In the future, six new four-star and five-star hotels are planned, along with 42 apartment buildings containing 490 individual apartments. As part of the development, some 25 ‘unique and exclusive chalets’ will also be constructed.

Other notable developments at the resort include the recent opening of a 650-seat classical music concert hall, as well as a ‘world-class’ 18-hole golf course – ranked three years in a row as the best golf course in Switzerland by the World Golf Awards.

Previously, Property Investor Today visited Andermatt for its summer and winter seasons to find out what it offers, and also carried out a Q&A with Stefan Kern – head of PR at Andermatt Swiss Alps – to find out how you can successfully build major developments with buy-in from the local community.