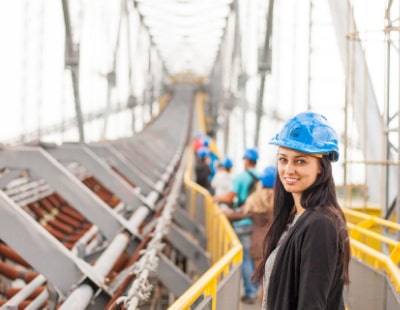 In March, to coincide with International Women's Day, we ran a series of articles about women working in property - and in particular construction. Alongside this, our ongoing Women in Property Investment series has sought to shine a light on a still underrepresented part of the sector.

Here, Amy Mercer - a digital outreach executive at award-winning digtal marketing agency Mediaworks - explores how the construction sector is faring when it comes to equality in the workplace.

The construction industry has made significant progress in terms of gender equality. The traditionally male-dominated field has made efforts to open its doors to a greater variety of people, offering women the chance to engage in this dynamic and challenging environment.

Not only are more women entering into the field, but they are entering at higher levels than they ever have in the past. This sparks optimism for any young women wishing to pursue a career in construction. For this piece, we spoke to some young women in this field to find out what it was like to be a woman in the construction industry and researched the opportunities that are out there for women in construction.

One reason for the increased number of women embarking on a career in construction is the amount of initiatives that have been introduced to minimise the gender gap in STEM (science, technology, engineering, or maths) careers. It is now commonplace for female STEM ambassadors to go into schools and deliver talks, aimed at engaging young girls to consider STEM jobs.

Thanks to organisations like this one, which aim to normalise the position of women in the construction industry, more young girls than ever are feeling inspired to pursue this career path.

What’s more, university-level schemes and initiatives are in place to encourage women to choose this career choice later in their educational life. One of the women we spoke to described how she entered into an engineering degree at university via a scholarship, the terms of which required her to do an internship each summer holiday.

She explained that, "this gave me the motivation to find a placement for the first summer, which is the hardest one to get. Once I had my foot in the door, it was much easier to find the next one, and the next one!”

Another female engineer, who completed her training in Japan, explained the initiatives surrounding engineering and construction that existed at her university and workplaces. “All large companies in Japan,” she told us, “are obligated to increase female managers by the government."

Clearly, there are initiatives in place all over the world, which set out to support young girls from primary school age, up to women on the brink of their career.

A day in the life of a woman in construction or engineering can mean new challenges, problem solving opportunities, and a dynamic team atmosphere. For women who have broken through the glass ceiling of the construction industry, however, the lack of other women in their workplace can often feel disconcerting or intimidating.

When speaking to the Guardian, one female engineer said: “My first day on site was tough. I do think it’s getting easier for women but it’s intimidating because there aren’t a lot of women who operate machinery; you don’t see them on site, people stare a lot. It can be quite hard to take. It will get better. It is changing, but it is tough.”

In line with this thinking, one of our contacts concurred, saying: “I think due to the nature of the work, construction is always going to attract more men than women, but I also think that the imbalance puts more women off. Once there is a critical mass of women in the workplace, more would join and, critically, stay.”

Structural engineering consultancy director Kate Watson also commented: “From holding your own as the only woman in a room full of older men, to defying stereotypes and practicalities such as never having personal protective equipment (PPE) that fits, there are many hurdles faced by women in our industry."

Clearly, adaptations have been made and many women have entered the industry. But this is just the beginning, and soon we will see a larger percentage of women heading into this sector.

So many seemingly small changes have been made to this industry that are having a transformative effect on female employees’ daily life. Safety clothing, for example, has now been adapted to fit both men and women (rather than the previous ‘one size fits all’ approach).

Construction sites have seen an increase in separate female toilets, and many construction firms are now increasingly flexible regarding working hours, making it more feasible for both women and men to work productively and fit working around family life.

Despite the current imbalance, we are seeing more and more women enter into STEM industries every day. There is certainly reason enough for women, like men, to be interested in this field. One of the women we spoke to cited watching Formula 1 as a child as her inspiration to go into engineering, while another told us that it was the problem solving element that most appealed to her.

"What I like most about the job is the constant problem solving, which is one of the key things engineers have to do," she said. "There are so many little challenges to overcome every day and sometimes some lateral thinking is required to figure out the solution. It can be really interesting.”

Whatever their reason, we must continue in our mission to diversify the world of construction and engineering as this diversity is sure to lead to an exceptional workforce and many exciting projects on the horizon.

*Amy Mercer is a Digital Outreach Executive at Mediaworks

Over half of available land plots snapped up by developers ...

Approximately 54% of all available land plots listed for sale across...

A PropTech start-up launched in 2017 to make property investment less...

How the Airbnb phenomenon has stepped up international design ...