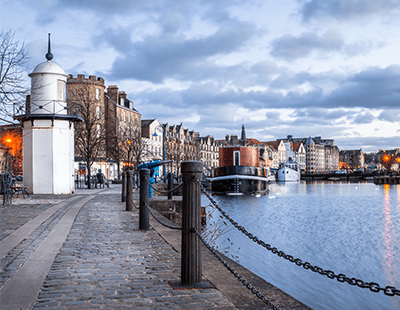 It’s best-known for its starring role in one of The Proclaimers’ most iconic songs – and the musical film based on the Scottish duo’s impressive back catalogue – but what does Leith, a port district in the north of the city of Edinburgh, offer when it comes to property?

A character all of its own

Despite being part of Scotland’s most famous city, not to mention a tourist hotbed and the country’s capital, Leith isn’t swallowed up by Edinburgh and has a distinctive charm of its own. It’s a buzzing hub of lively eating and drinking spots, cultural diversity, creativity, history and modernity. It’s home to hip creatives and tech workers, living alongside people who have been in the area for many, many years.

It has something of a legendary and iconic status among locals and visitors alike, and has been immortalised in song thanks to the lyrics penned by Charlie and Craig Reid - the glasses-wearing duo making up The Proclaimers - in their hit album ‘Sunshine on Leith’. 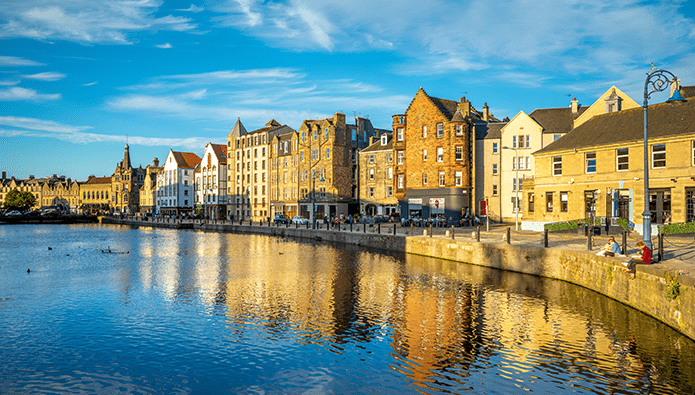 Situated on the shores of the Firth of Forth, at the mouth of the Water of Leith, the district previously served as the port of Edinburgh for hundreds of years. The area’s original harbour, for example, dates back to the 14th century and was visited by many travelling kings and queens, including Mary Queen of Scots and King George IV.

Nowadays, it’s best known for its packed-out restaurants, delis and drinking spots, and the various cultural activities it provides. The shore area plays host to a number of independent and contemporary galleries, including the Corn Exchange Gallery. Additionally, a range of cultural festivals - such as the Leith Festival and the Edinburgh Mela - take place here throughout the year. Arguably its most famous landmark is the five-star Royal Yacht Britannia, a royal residence nestled next to the Ocean Terminal Shopping Centre. 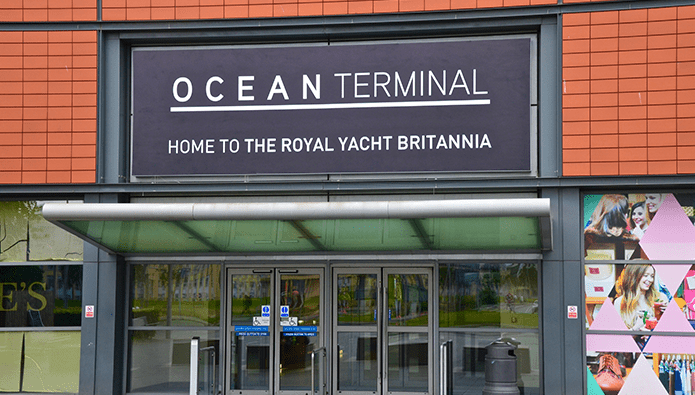 The area is well-known for its bistros, bars, restaurants and traditional pubs, and can be reached from Edinburgh either by bus, car or foot.

How is its property market performing?

The latest ESPC data shows that property selling prices are rising in Edinburgh and its surrounding areas as an increasing number of homes go on the market.

Properties in the north of the city – which includes Leith - witnessed the largest growth in average selling prices, increasing by 9.8% to £299,102.

Three-bedroom houses in Dunfermline achieved the highest sales volume of any property type in Edinburgh, the Lothians, Fife and the Borders in the last three months, followed by two-bedroom and one-bedroom flats in Leith. 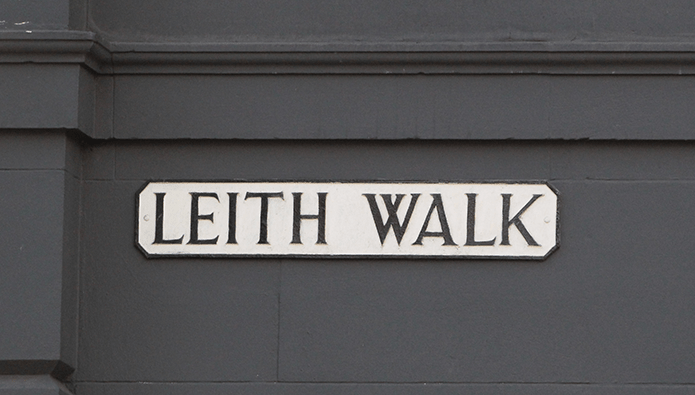 From a rental perspective, Leith has high tenant demand thanks to the growing number of businesses, creative firms and tech startups operating in the area, in addition to its considerable appeal to young professionals.

Research recently revealed Edinburgh’s top locations for yields, with much of the city performing well on returns for landlords and investors. Along with the West End of the city, Leith was said to be the most in-demand location for renters, although competition for properties in these areas means that the average property price is high, which leads to yields being less strong than areas with slightly lower house prices.

Why should property investors consider Leith?

Rachael Pittaway is a director at Castleforge Partners, the real estate investment firm behind Clockwise Offices. 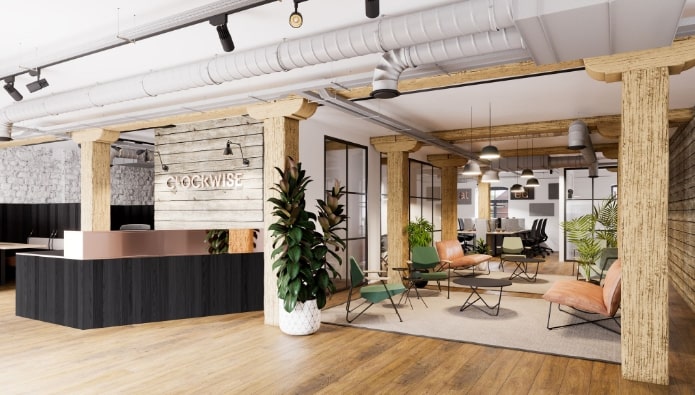 “Edinburgh’s port district Leith is a hotspot for business and talent,” she said of the firm’s decision to invest in the area.

“When Edinburgh was revealed last month as the top destination in the UK for millennials, based on wages, rent, salary and mental wellbeing, City Council leader Adam McVey highlighted Leith specifically as an example of a district popular among a younger generation, citing its recent transformation and ’real buzz’.”

She added: “Known across the city for its local character, the residents’ home pride and gaining a reputation for creativity and flair, the young professionals who favour the area are in high-demand for employment by both smaller businesses and larger players.”

“A prime example is the Leith Agency, one of the biggest marketing agencies in Edinburgh, which has drawn on a rich talent pool to thrive at its home in Leith’s Commercial Quay – neighbours to our proposed Clockwise space.”

She said Leith is a place where ‘creative credentials meet with tech talent’, as the area boasts the highest number of internet-related businesses in Scotland. Among the innovative firms that originated in Leith or call it home are well-known flight comparison app Skyscanner, sustainability-focused online platform FutureX and investor Seed Haus.

“Helping these businesses - from the start-ups and SMEs to the established Scottish stalwarts - attract and retain talent is Leith’s desirability outside of the world of work. The food and drink offering includes the esteemed local farmers’ market and Michelin-starred The Kitchin, to name a few,” Pittaway continued. “Heritage-rich character buildings – of which our refurbished former bonded warehouse is an example – and a picturesque port-side location add to this, encouraging local employees working in the area to put down roots. “

She said demand is high across commercial and residential property, with a real opportunity for quality in a sought-after destination. “By refurbishing a beautiful space just metres from the waterfront at Clockwise, we aim to serve rising demand for affordable yet beautiful space for businesses, in turn driving local residential demand.” 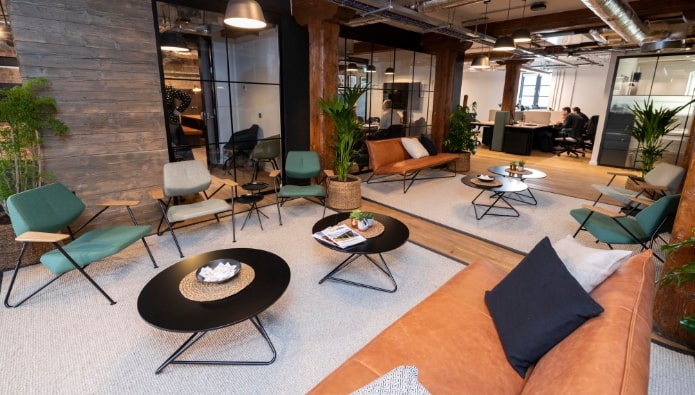 Pittaway went on: “We see the appetite for properties in Leith only increasing, as the already well-connected district – with the city centre easily commutable in around 20 minutes – is brought on the map further by the Edinburgh to Newhaven tram extension, earmarked for 2023 completion. The line will build on the area as perfect for individuals and businesses looking for the community-feel of a suburb linked to the amenities of a world city.”

She concluded: “Savvy commercial and residential development is focused on areas with opportunity in abundance, both for individuals and employers. As we prioritise vibrant communities and helping businesses target a rich employee base, Leith is the perfect fit.”

For now, it seems as if the sun is most certainly shining on Leith.

A Build to Rent platform set up by Macquarie Asset Management...

Research by a student accommodation platform has found that the majority of student...