While 2020 has been a challenging year due to Covid, the property market has boomed, driven by changing priorities for homeowners and renters, and the stamp duty holiday introduced by the government in July.

In fact, every region in the country recorded a rise in house prices in September, according to RICS’ September UK Residential Market Survey – hitting an 18-year high.

With record-breaking prices and transaction levels expected to maintain momentum through to 2021, the question for investors is where are the top cities and towns to invest in next year? 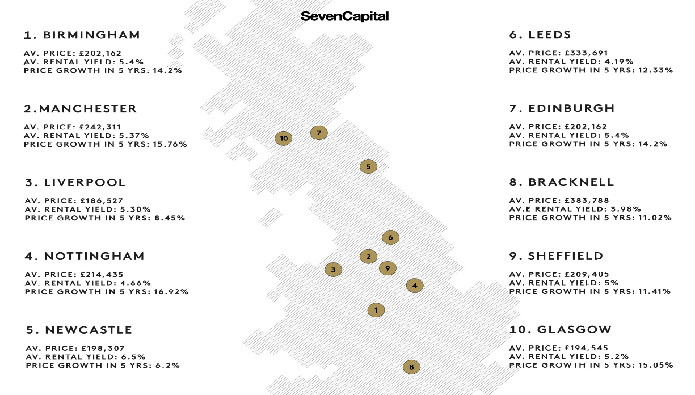 Now developer SevenCapital - using figures from the likes of JLL, Knight Frank and Zoopla - has come up with a list of the top 10 best places to invest in UK property. Below, Property Investor Today takes a look at their findings.

The UK’s second city once again tops the list as the best place to invest in the UK. Average rents have risen by 30% over the last decade and are expected to rise by 15.9% over the next four years.

With a raft of key projects upcoming and in the pipeline – notably the Midlands Metro extension, HS2 and the 2022 Commonwealth Games - Birmingham’s appeal is due to skyrocket. Its population is expected to hit 1.24 million by 2030.

Considered a Northern powerhouse for property, Manchester’s appeal continues to build momentum as a top place to invest, with house prices set to grow a further 17.1%, according to JLL.

With employment growth of 84% between 2002 and 2015 presenting 'endless opportunities' for young professionals, and the Great North Rail project expected to come into effect by 2022, Manchester certainly shows no sign of slowing down.

Another popular North West hotspot for renters, Liverpool boasts some of the highest yielding postcodes in the country. L1, commonly known as the Baltic Triangle, has delivered 8.1% annually in the past, whilst L7 has been known to deliver annual rental yields of 10%.

JLL predicts a rise of 13.1% over the next four years, set to be bolstered by the £5.5 billion Liverpool Waters scheme which will deliver new public spaces and create 17,000 jobs.

More affordable than Manchester, but with prices on par with Birmingham, Nottingham offers small pockets that achieve high yields of around 9%.

With two major universities near the city centre and the Queen's Medical Centre – a ‘super hospital’ home to 6,000 medical staff - demand in Nottingham continues to strengthen.

As the 8th largest city in the UK, Newcastle is leading the way for investment in the North East. One of the more affordable locations, Newcastle offers a strong average rental yield of 6.5%.

The city has one of the best graduate retention rates in the country and is recognised as one of the fastest-growing regions for new start-up businesses, both of which will likely boost demand from young professionals.

Home to 800,000 people, 73% of households in Leeds are currently renting, making this an ideal spot for investors seeking long-term tenants and consistent returns.

Leeds’ economy is one of the fastest-growing in the country, rivalling several European cities. Whilst capital growth sits just under 10% over the past five years, JLL predicts an accelerated growth of 13.7% over the next five years, and 14.2% cumulative rental growth.

Due to its huge popularity as a place to live and work, Edinburgh has seen excellent price growth over the past decade, demonstrated by its slightly higher average price point than most of our top ten.

With its continually rising economy, JLL predicts a positive impact on property prices to the tune of 17.1% over the next five years – the highest growth rate of any UK city.

Home to a host of globally renowned tech businesses such as Dell, Microsoft and 3M, Bracknell is in the midst of a large-scale £770 million regeneration which has already boosted its appeal significantly, with Knight Frank forecasting price growth to hit 17% over the next five years.

As for its track record, Bracknell’s house prices have risen 249% over the last 20 years, yet at less than an hour away from London, it’s still nearly half the price.

Sheffield has blossomed over recent years, thanks to £480 million being invested into developing its retail district and a wave of further improvements to amenities. As such, desirability in these central areas have increased, with rental yields reaching up to 7% in certain postcodes.

The city is also amongst the top markets emerging from lockdown, where according to Zoopla sales were 20% higher than at the start of the year.

Offering a lower entry point than Edinburgh, what Glasgow has in favour is higher five-year capital growth to date and a slightly higher average rental yield, both of which look set to strengthen further over the next five years at 15.4% and 13.4% respectively.

Poll: Do you agree these are the best cities to invest in in 2021?

Revealed – where are the best places to be an investor right now? ...

When it comes to investing in property, strong rental yields are...