New research has revealed the average size of homes by London borough, as well as how much space costs per square metre in each area.

The findings, from London-based self storage space provider Attic Self Storage, used government datasets to highlight the average floorspace of different types of property in the capital’s 32 boroughs.

The firm says the results will enable Londoners to understand where they’ll ‘get the most bang for their buck’ when moving homes. 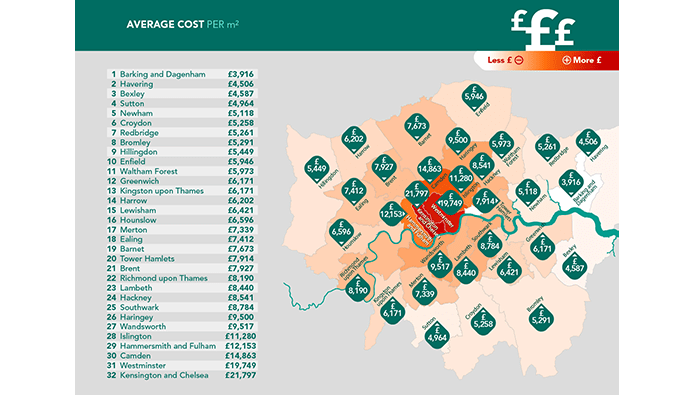 Some of the findings are fully expected, with affluent Kensington & Chelsea the borough where a metre square costs the most - weighing in at a hefty £21,797. By contrast, the further east you go, the amount you pay keeps dropping. A square metre in Barking & Dagenham, for example, costs £3,916, the cheapest in London.

Meanwhile, London’s biggest abodes are to be found in leafy, well-to-do Richmond upon Thames, where the average home is a spacious 100m2. At the other end of the spectrum, nearby Merton is home to the smallest properties in the capital, at 62m2 on average.

London’s outer boroughs, as you might expect, tend to have larger homes – with space at less of a premium - whereas properties in inner city areas such as Hackney, Islington and Southwark typically offer less floor space. The only exception to this rule? Wealthy central boroughs such as Kensington & Chelsea and Hammersmith & Fulham, where homes are up to 20m2 larger on average.

Anyone who’s spent any time in London will also know there’s north-south divide when it comes to cost, especially in inner city locations. While homes on both sides of the Thames are around 73m2 on average, those to the north will typically cost significantly more.

In Islington, for instance, buyers can expect to pay £11,280 per square metre, but head due south to Lambeth and the same amount of space will cost only £8,440 – which is why, even now, South London is generally seen as the place to head for those looking for more affordable living in the capital.

In London overall, the average house price is £656,495, while the average square metre of property in the city will set buyers back £8,091, the research found.

The data also revealed how different types of properties (houses, flats, maisonettes, bungalows) cost more or less in different parts of London, with the biggest properties of all types consistently found in the traditionally well-off boroughs.

That said, the research uncovered some interesting trends, in that some of the biggest flats can be found in the otherwise cramped borough of Tower Hamlets.

“Londoners know how challenging it can be to get a property with a reasonable amount of floor space for their money,” Frederic de Ryckman de Betz, chief executive of Attic Self Storage, said.

“We hope the findings of our research can be used to help people spread the net when looking for their next home and find a borough which matches their needs and budget.”

You can examine the findings in greater detail here.

The quietest boroughs in London have been revealed in new research...