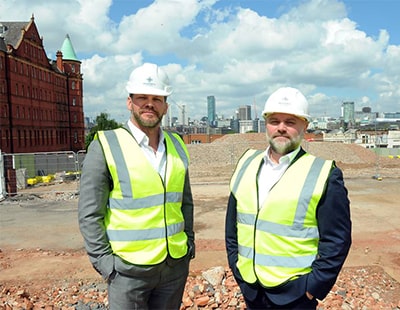 A new-build residential development near Birmingham city centre that sold out before contractors had even started work on site has now begun construction.

The one and two-bedroom apartments at Moseley Gardens in Digbeth – all 67 of them – were snapped up within weeks of being launched to the market, according to Prosperity Developments.

Prosperity Developments, founded in 2007, is part of Birmingham-based Prosperity – a group of companies which build, develop and sell buy-to-let apartments to new homebuyers and a global investor audience.

The latest project for the ‘niche residential developer’ – which builds and converts off-plan and Permitted Development Rights property in key locations across the UK ‘where yield and rental demand is high’ – is the five-storey Moseley Gardens development, being built on 13,000 sq ft of land at Moseley Street. It is being funded by specialist lender BLG Development Finance.

JA Ball, meanwhile, has been appointed as contractor, with the work expected to reach completion in 2020.

“We are delighted that Moseley Gardens has proven to be so popular with buy-to-let investors and owner-occupiers, who are keen to take advantage of the development’s convenient location,” Joe Billingham, chairman and chief executive at Prosperity Developments, commented.

“The fact that all of the available apartments have been purchased entirely off-plan, demonstrates how desirable it is to live and invest in Birmingham city centre.”

Billingham added: “As a specialist development finance lender, BLG’s understanding of the planning and property development journey is extremely helpful. We worked in partnership together on a similarly successful scheme – B1 in Edward Street – and very much look forward to delivering another development for Birmingham that we can all be proud of.”

Perry Kurash, head of new business at BLG Development Finance, said the company was delighted to have provided the Prosperity Group with a senior purchase and development loan for Moseley Gardens. “This is a fantastic scheme in an up-and-coming area of Birmingham and we are proud to be associated with the regeneration of this location. This is the third scheme we have financed for the Prosperity Group and we are excited to see this project come to fruition.”

The Prosperity Group of companies has a residential and commercial portfolio with a gross development value (GDV) of more than £400 million, which includes 34 new-build and conversion projects across the UK, totalling 2,494 apartments.

It recently announced a new partnership with London-based strategic and professional development manager, F3GROUP. The move is expected to enable the fast-growing developer to bring forward plans for a series of new residential development schemes nationwide.

The above project is the latest sign of Birmingham’s emergence as a property investment hub. Last week we ran a story about a luxury development (also in Digbeth) selling well in the city’s creative quarter, while SevenCapital’s flagship Birmingham city centre development, St Martin’s Place, was recently revealed to be 95% sold one year from launch.

Last year, meanwhile, Birmingham was revealed as the UK’s top university buy-to-let location, while this article from SevenCapital outlined why now is the time to invest in the UK’s second biggest city.

Birmingham’s reputation as a growing investment hub has also spread to the wider West Midlands region as a whole, with a Carnegie library recently converted into new homes in Stourbridge, two Grade II listed buildings destroyed by fire in Hereford being transformed into a luxury development, and bargain Birmingham properties on offer at a recent Bond Wolfe auction.