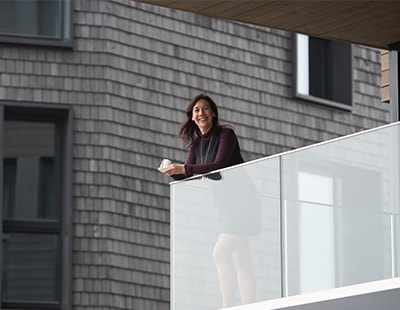 The first British purchaser of property at Swiss ski resort Andermatt Swiss Alps says she has been ‘blown away’ by how much the resort has developed in a short period of time.

Karen O’Mahony, who lives in London and works in the private equity sector, purchased a property at the growing resort last March.

The development of Andermatt began in 2008. The £1.2bn project, which is due for completion in 2020, will contain six new 4 and 5* hotels, nearly 500 luxury apartments and 25 bespoke villas.

Property Investor Today recently caught up with Karen to understand exactly what inspired her to buy an apartment in Andermatt Swiss Alps.

How did you find out about Andermatt?

My friends and I were invited to Andermatt where we stayed at The Chedi Hotel, situated in the centre of the old town. I remember vividly, the following morning we found ourselves at the top of the lift on the Gemsstock Mountain. The views were spectacular and the slopes long, wide but difficult in parts - i.e. - the perfect ingredients for the right amount of challenge. We skied out of our skin and with so few people on the slopes, there were no queues at the lifts!

It is a fantastic ski area with an excellent choice of black and red runs. It also offers plenty of off-piste skiing. As anenthusiastic skier, I found myself really well challenged both on and off-piste.

The following day we went to the sister mountain at Sedrun (which has a mix of wide open red and blue runs with off-piste in between) and skied there. They are currently linked by a train but from 2017/18, the two will be linked via lifts, which will be a welcome addition.

What makes Andermatt stand out from other ski resorts in the Alps?

Since my mid-twenties, I have been a very keen skier. Over the years I’ve spent a lot of time in all of the established resorts, including Verbier, Zermatt, Val D’Isère and Chamonix. Never have I experienced skiing quite like at Andermatt.

Andermatt is a hidden gem – not many people outside of Zurich have heard about it. The village of Andermatt is gorgeous; tucked away in the Urseren Valley,yet only 90 minutes from Zurich Airport. The proximity to Zurich airport means that within three hours from landing, I can be on the slopes.

Andermattalso blends ‘old’ and ‘new’ to create something unique. The town is quaint and the local restauranteurs serve amazing traditional dishes – Rosti and BündnerNusstorte.

At the same time, the facilities in the Chedi hotel, the spa and restaurants are state-of-the-art,but still understated in their elegance.

What made you purchase your property in Andermatt?

There were five things I was looking for in a ski chalet: proximity to aninternational airport, panoramic views, a challenging ski area, a sizeable high-quality apartment, and finally, good value for money.

I looked around the likes of Verbier, Val D’Isère and Portes du Soleil, but nowhere could I find all five of these things.

I had looked at a number of apartment blocks, and although the residential properties in the Chedi are very attractive, I wanted an entirely unobstructed view of mountains and the river. This led me to buying a property towards the edge of the village. The Schneefalke apartment is brand new and has been constructed by Swiss Properties that are known for their high-quality build.

I also really enjoyed the process of designing the apartment. Being able to choose everything from the colour of the floors to the walls means that the apartment will really feel like my own.

Would you recommend purchasing property in Andermatt to other British buyers?

Absolutely. As a UK buyer, it’s tough to find good value in Switzerland as many of the ski resorts have stopped building new chalets, thereby squeezing up prices to exorbitantly high levels.

However, for my apartment in Andermatt, I paid just CHF 12,500 per square metre, which is not only good value for such high quality new buildings, but given its proximity to Zurich and the quality of the slopes, I am pretty confident that it will increase in value.

In some of the resorts the price per square metre was anything between CHF 20,000 and CHF 24,000, which made mine look very reasonable indeed. Although I wanted a ski chalet for life, the fact that no capital gains will be charged on a sale before 2030 was also attractive.

What do you think the future holds for Andermatt?

Andermatt may once have been a well-kept secret but it is now becoming a big, exciting project. The vast changes over the last five years give a clear indication of where the Andermatt project is headed.

On my last visit, I was blown away by how much the resort had evolved and grown and by the quality of the new facilities. I’m even more excited about it today than when I bought the apartment.

The connection of the Andermatt and Sedrun slopes is going to be a major attraction to an international community that is always on the look-out for another place to ski.The influx of international investors will also create a lot of new business in the area, particularly bars and restaurants which are already changing to cater for the high society international set, as well as Zurich locals. This will be a big positive for the local community and economy.