Homeowners across the UK planning to sell up are being warned of the risks of listing their home at an unrealistic asking price as buyers avoid anything that looks overpriced.

Newly-listed asking prices increased by 1.1% in the month to mid-April, a jump of £3,547 compared to mid-March, according to new data from Rightmove.

The latest figures show that the typical price tag in England and Wales is £313,655 – higher than the £310,108 average home value recorded a month earlier.

The monthly rise in asking prices was the highest for this time of year since 2007, before the credit crunch.

Rightmove said that while the run-up to an election tends to create a degree of uncertainty and often a pause in activity, the latest asking price figures should help mitigate pre-election jitters.

Miles Shipside, Rightmove director and housing market analyst, said: “Since the start of the decade, the average March price rise has been 0.9%, so this month’s 1.3% uplift is an indicator of a shortage of suitable property for sale in many parts of the country, with strong demand for the right property at the right price.

“Since 2007 we’ve only once seen a larger rise than this in March, and we are also keeping pace with last year’s rise, which had the added momentum of investors looking to beat the Stamp Duty tax deadline of April 1.”

Shipside believes that increasingly stretched buyer affordability will continue to be a price moderator for sellers who are over-ambitious with their pricing, tempering the pace of price rises.

“Strong buyer activity this month has led to 10% higher numbers of sales agreed than in the same period in 2016,” he added. 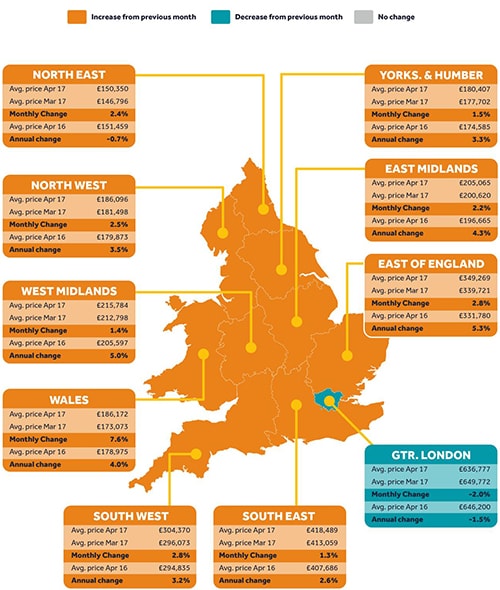