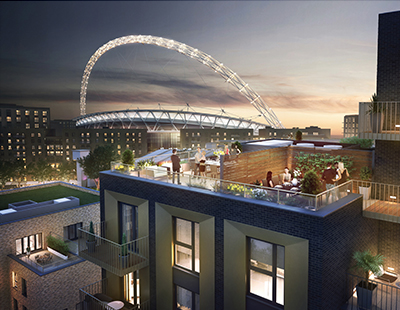 A £2.5bn regeneration scheme around Wembley Stadium has been given the go-ahead by Brent Council and will see up to 4,850 new residential properties developed.

Aside from the building of new homes, the large-scale regeneration scheme will also feature 350,000sq ft of new offices and shops, two new hotels, a new seven-acre public park, student accommodation and a primary school.

Despite some objections to the size and scale of the scheme, the council decided to give developer Quintain outline planning permission for the construction of seven residential and commercial tower blocks of up to 19 storeys.

Max James, chief executive of Quintain, said: “We are delighted that Brent Council has approved our new plans, accelerating the delivery of thousands of new homes, jobs and a fantastic new park in this prime location next to the iconic Wembley Stadium.”

When it comes to exciting urban renewal projects, they do not come much bigger than the new thriving neighbourhood being created in Wembley Park, North West London.

The existing new build homes around the famous football stadium start from £305,000, with several hundred already built, sold and occupied.

James added: “We are excited to be playing such a pivotal role in creating the next chapter of this great city. We are creating a vision for Wembley which will truly fulfil its global heritage as the most famous sports and music destination in the world, now combined with modern urban living.

“We are committed to working with all stakeholders, including Wembley Stadium, to make the scheme a great success.”

Vatche Cherchian, regional director at Portico, reports that property prices in and around Wembley have risen by around 10% over the last 18 months, and the signs are that they may yet increase further on the back of the renewal scheme in Wembley.

He said: “The regeneration of parts of North West London has also helped attract a new age of tenants and buyers, with trendier high streets and amenities now available in these areas.”