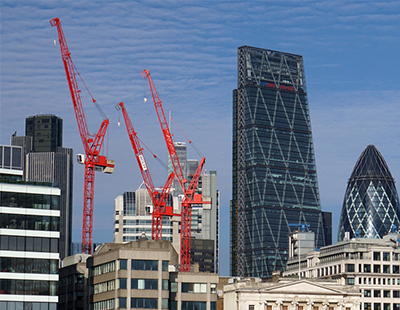 There remains a severe shortage of affordable office space in the capital despite the fact that London office starts have soared to a 20-year high, according to leading property consultants.

While the latest London Office Crane Survey by Deloitte Real Estate reveals that work has started on 51 new office buildings over the past six months to reach the highest number of new starts since records started, many businesses in London are still struggling to access affordable office space, according to Daniel Watney LLP.

Contractors have been busy, with the amount of space under construction in the capital having almost doubled from 7.7m sq ft to 14.2m sq ft in the past 18 months, with plenty more room for growth.

Various major tower schemes are currently being bulldozed with plans to replace them with new developments, acting as a reasonably reliable indicator of future new starts, which suggests that activity in the office construction sector will continue to rise over the next couple of years.

But Richard Garner, head of commercial at Daniel Watney, said that while the rise of co-working spaces has benefited some firms, they are simply not appropriate for all companies.

He said: “While today’s construction figures are positive, they only tell half the story. There’s still a very real supply crunch across the capital with firms unable to access space they can afford. We’ve seen swathes of office blocks converted to prime central London housing, which has eaten away at the supply of secondary space. This has been the space that is typically more affordable to SMEs on account of being less well specified or not new.

“Areas like Soho for example - which have undergone substantial redevelopment, have seen many creative companies leave as a result: they simply cannot find the space they need at prices they can afford.”

To support the capital’s long-term success, Garner is calling on the new mayor of London to develop a city-wide strategy for providing workspace.

He added: “The new mayor should think about a London-wide strategy for developing the right mix of workspace. Co-working spaces are on the rise, but these types of offices will not be appropriate for all businesses and, in any regard, some are far pricier than more traditional leasing.

“For blue chips able to agree lettings on top notch space, today’s survey is good news. But many firms across the capital will see limited benefit.”

Plans to transform a former Yorkshire colliery into a new business...

Overseas interest in UK real estate and construction through the roof – report ...

The proportion of overseas investors who consider real estate and construction...