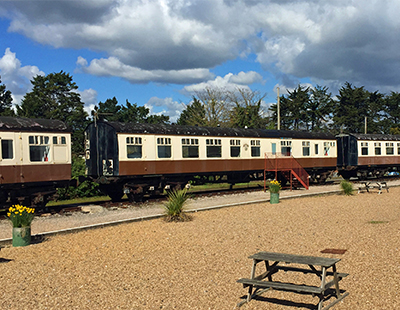 Chapels, historic houses, city centre apartments and a holiday park with a difference are among 160 lots catalogued by Clive Emson Auctioneers for the five-day October/November sale.

This follows the firm’s September auction in which more than £17m worth of land and property was sold on the back of an 80% success rate.

The highlight of the upcoming sale is arguably the iconic Brunel Camping Carriages Site at Dawlish Warren in East Devon which features chalets in converted railway carriages and is being sold with a freehold guide price of £125,000 to £175,000.

The holiday park has eight locomotive carriages. All are named individually after UK cities. Each includes a kitchen, living area, bedroom and bathroom to sleep six to eight people. It is believed that the site closed at the end of this summer after 50 years.

A unique and historic property in Hythe, Kent, constructed in the shape of a letter ‘Q’ and known as The Whim, has a £290,000 to £300,000 price guide. Built between 1874 and 1878 to the design of eccentric owner Henry Scott, the Grade II-listed bungalow has a central lanterned roundel and segmental rooms.

The Victorian country pile Abbots Worthy House in Abbots Worthy near Winchester, set in 11.5 acres of land and with a guide price of £1.5m to £1.6m, features nine bedrooms and staff quarters. It has a Gothic wing, was remodelled in the 1950s and is now in need of refurbishment works throughout.

Managing director James Emson, commented: “There is truly something for everyone and I believe the number of lots we have on offer shows our continued commitment to provide a professional service for both vendors and purchasers.

“We go into the busy autumn period with renewed determination as our new online auction service takes flight complementing our traditional sales in all other areas of the country.”

Clive Emson holds a regional auction at five locations every six weeks. The October/November auction, starting at 11am, is at the following venues:

A growing number of investors are starting to shun residential property,...

Former signal box among 143 lots to be sold under the hammer ...

Clive Emson has released a new catalogue ahead of its five-day...

With attractive returns on offer, a growing number of property investors...