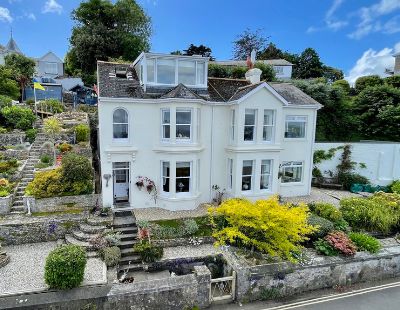 It's been claimed that Brixham is the new cool spot in the South West as seaside towns continue to enjoy a coastal wave in demand, as well as surging prices.

New statistics from national estate agent Winkworth reveal that over the past five years property prices in Brixham have seen an increase of up to 25%.

Rightmove claims that over the last year properties in Brixham had an average price of £308,205 and terraced homes were the most popular among buyers.

With a huge influx of tourists and visitors, which supports the demand for accommodation, Winkworth says that investors ought to consider purchasing in Brixham.

What does Brixham have to offer?

Brixham is a town in Devon with one of the busiest fishing ports in the UK. The picturesque destination is a magnet for art enthusiasts as a range of art galleries and museums surround the town.

Seafood lovers can feast at the seafood restaurants or take a trip to the famous Brixham Fish Market and prepare their own.

There is a selection of sandy beaches where visitors and residents can go for a swim in the tranquil sea, go rock climbing or explore Brixham on foot during a relaxing stroll.

Known for its culture, beauty, and historic landmarks, the seaside town holds appeal for adults and children alike.

In the latest episode of its Property Exchange podcast, Dominic Agace, chief executive of Winkworth, says that prices in homes by the coast have gone up over the past decade by 50%. “Compared to a rural location, that’s a huge increase, being driven by lifestyle desires which are becoming more and more important to people," he said.

"The houses with sea views are generational houses. People who have them hang onto them. Someone I know whose mother had passed away did exactly that. She had owned a beautiful 17th century house and a bungalow with a view over the sea in Cornwall. The family sold the period house and kept hold of the bungalow, which had been owned by them for generations.”

Richard Blake, who runs Winkworth’s Torbay and Dartmouth offices, concludes: “Brixham is the new cool place. Historically, it has been more affordable than Dartmouth. We have lifestyle buyers who are moving lock, stock and barrel to the area and those who purchase second homes for their families and as holiday lets when they’re not using them."

"Brixham is one of the country’s busiest fishing ports and has a harbour surrounded by hills. The town is full of pavement cafes, and pretty boutiques while still being a working resort. There is also a fantastic marina. Two-thirds of the properties are lived in full time – so there is a proportion of second homes, which is important to the local economy, local tradespeople and the shops.”

Staycation 2021 – where are the top UK holiday rental hotspots? ...

With travel abroad clouded by uncertainty during the coronavirus pandemic, throwing...

Revealed: The highs and lows of London’s property market ...