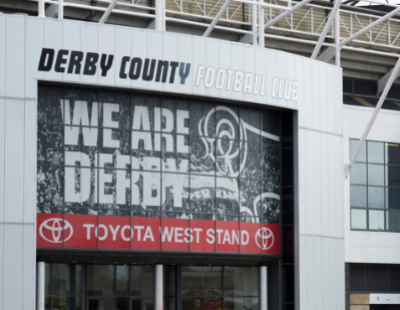 Not for the first time, the worlds of property and football have collided with the proposed takeover of beleaguered Derby County FC.

The League One club, relegated from the Championship last season after a heavy points deduction, are on the verge of being bought by local property developer Clowes Developments.

The Derbyshire-based firm, which specialises in commercial, industrial and residential projects, was originally expected to complete the purchase on Wednesday, then Thursday, before a further delay was announced last night.

Over the weekend, Clowes had its bid for Derby County accepted over the weekend Clowes, having already purchased the club's Pride Park home ground from fellow local businessman Mel Morris and provided the club with a loan to ensure it can start the upcoming season.

A spokesperson on behalf of the joint administrators of Derby County declared on Thursday night: "The joint administrators, EFL, Clowes Developments (UK) Ltd and their advisors have worked throughout the day to resolve the small numbers of outstanding issues in order to complete this extremely complex transaction."

It added: "All parties acknowledge the frustration caused by these further delays and would like to thank supporters for their ongoing patience, as we collectively continue to work towards finalising this transaction."

Derby have faced a protracted takeover saga which previously involved the collapse of a bid by American businessman Chris Kirchner.

The club, which has faced years of on and off-field disruption and mismanagement, is without a permanent manager at present after Wayne Rooney – England and Manchester United’s record goalscorer – left his post, replaced on an interim basis by former footballer Liam Rosenior, who has spent the last three years on the club's coaching staff and previously worked as a pundit. The club currently has only five players under contract and had been in administration since September.

Who are Clowes Developments?

A well-known local company, which mostly focuses on the Derbyshire area but has projects throughout the UK, Clowes Developments were established in 1964 by Charles W Clowes and are still a family-run business, currently led by David Clowes.

A big, life-long Rams fan, he has been eager to bring back some hope and stability to a club that has suffered a dismal few years and some shocking financial mismanagement.

The company says its portfolio makes it one of the largest and strongest privately-owned property investment and development organisations in the UK, with £300 million worth of assets, 18,000 consented residential plots, and 3,000 acres of development pipeline.

According to its website, it works with the likes of Tesco, Marks & Spencer, Legal & General, the NHS, Mercedez Benz, Bellway and Standard Life.

It specialises in land acquisition and promotion, development and asset management, with completed projects including a number of properties in Derby’s Cathedral Quarter, creating new homes and jobs (as well as protecting the village from heavy traffic) in Castle Donington, Davenport Park Apartments in Stockport, 175-195 Edgware Road (a mixed-use property in the heart of West London), and luxury apartments at Riber View in Matlock.

Earlier this month, it announced a joint venture with Bellway for their combined land holdings on Chellaston to form Snelsmoor Grange. The planning application for the residential development was submitted jointly to Derby City Council and received approval in March 2022, with the 800-home development forming part of Boulton Moor, a larger settlement on the outskirts of Chellaston.

Clowes Developments sold their share of the land holdings to Bellway following the news of the successful application, to enable the national housebuilder to progress with the residential development.

The takeover, which would appear to be a matter of ironing out formalities, would help to bring to an end the club's nine months in administration and means it can start to look forward to the new season with renewed hope. Derby County's very existence had been called into question following the collapse of Kirchner's bid on June 13. This was followed soon after by Rooney quitting, saying that the club needed to be led by 'someone with fresh energy'.

Last Friday, on the same day Rooney quit, Clowes announced that it had successfully purchased the company that owned Pride Park from Morris.

Derby, who were one game away from the Premier League as recently as the 2018-19 season, when they were managed by Frank Lampard, begin their season in less than a month when they host Oxford United at Pride Park on Saturday July 30.

The Grade II listed Risley Hall Hotel in Derbyshire has been...