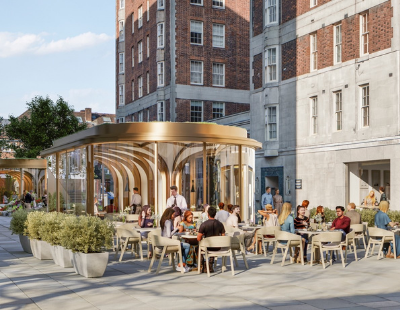 Last week the £3 billion vision for the future of Queensway in West London was unveiled, including Parisian-style street pavilions, significant greening, public realm improvements, a new retail strategy, a series of landmark developments and a new public entrance to Hyde Park.

The changes, to be delivered by the Queensway Joint Steering Committee in close consultation with Westminster City Council and Transport for London (TfL), is aiming to enable the creation of a new district for living, shopping, dining and leisure.

Nestled between Hyde Park and Notting Hill, the major regeneration project is seeking to deliver a blueprint for the future of London’s high streets. It will be bookmarked by ‘landmark’ property developments including The Whiteley - the grand reimagining of London’s first department store, Whiteleys - and Park Modern, a premium development overlooking Hyde Park.

A series of Parisian-style pavilions will aim to transform underutilised side streets ‘from crammed parking spots to new retail and dining experiences’. These ‘elegant glass pods’, featuring copper frames and planting on top, will feature ‘destination café dining’ that will enable seating to expand onto new courtyard areas, bringing al fresco living to this part of West London.

Overall, five key developments are proposed for the street, which covers Queensway and Bayswater. At the south end of Queensway, very close to Hyde Park, is Park Modern, from property development firm Fenton Whelan.

Work is already underway on the project to deliver 52 new, ‘world-class’ apartments, three penthouses and two mews houses overlooking neighbouring Hyde Park. Meanwhile, situated opposite will be a new entrance to Kensington Gardens, featuring a new crossing and road junction connecting the high street to Hyde Park. This will include an improved pedestrian crossing and a state-of-the-art traffic calming design. 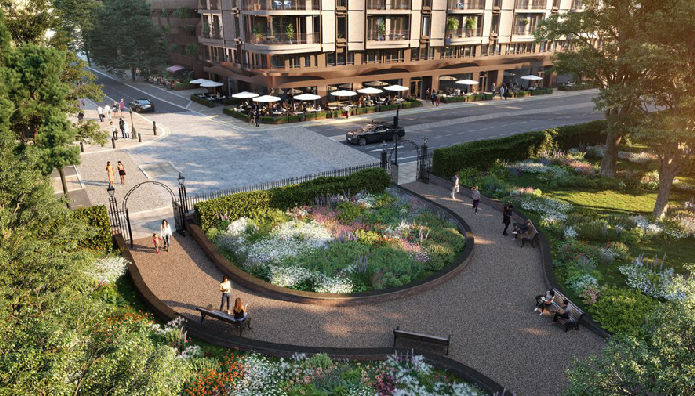 Further down the street, between Queensway and Bayswater Underground stations, is the redevelopment of South Queensway, including 68 new residential apartments and a new plaza at Princess Court. These are being delivered by property developer Bourne Capital. Further north sits a new retail parade at North Queensway from property investment firm GMS Estates.

The flagship part of the regeneration project can be found at the north end of Queensway, which was for a long time home to the iconic Whiteleys shopping centre. The Whiteley, developed by MARK, CC Land and Finchatton, with architecture bypFoster + Partners, is set to complete in late 2023.

The transformation of Queensway marks the biggest investment the area has ever seen. Of the eight retail parades located on Queensway, five will be ‘comprehensively regenerated’, to ‘reinvigorate the retail tone’ of the street.

According to Knight Frank, 70% of the 550 apartments currently in the Bayswater pipeline are focused on Queensway the committee behind the plans believes this will help reposition the area as a prime address in line with the local neighbourhoods next to Hyde Park.

They add that the Queensway regeneration project will deliver a bold mix of reuse, restoration, new building additions, and regreening. As well as delivering new buildings, the plans will also see the restoration of heritage buildings, support for existing businesses, the refurbishment of shop frontages, improved lighting, the greening of rooftops, and improvements to both Queensway and Bayswater Underground stations.

As part of the vision, an improved walking experience has also been prioritised, by cutting down commuter traffic to one lane and reducing parking. To achieve this, the pavements will be widened and will incorporate large-scale planting.

The planters, featuring trees and seasonal foliage, will also double as new seating, instead of traditional street furniture. This improved pedestrian journey will aim to provide the ideal route to connect from Hyde Park to nearby Notting Hill, and the area’s numerous canal walkways.

Publica, public realm experts well known for projects that have transformed areas such as Marylebone and Mayfair, have been hired to deliver the major transformation. Meanwhile, the masterplan of the streetscape has been designed by Burns and Nice, the practice behind both Exhibition Road and Mount Street.

At present submitted for planning with Westminster Council, the project is scheduled to fully complete in 2026. Once complete, it will deliver seven new buildings, more than 350 new homes, 10,000 sq ft of new office space, 530 metres of refurbished shop fronts and 500 metres of new retail opportunities.

“We are delighted to present a comprehensive vision for the rejuvenation of this historic area of central London. This once in a lifetime regeneration of Queensway will deliver an entirely new experience for visitors and residents, including a regreening of the streetscape, wider pavements, significant traffic reduction, improved street lighting and world-class new homes, shops, restaurants and public spaces,” Alex Michelin of Finchatton, on behalf of the Queensway Joint Committee, said:

“Through this major investment programme, Queensway will be reborn as a thriving, modern and vibrant living and leisure district; the high street of the future and a vital London destination.”

A few years ago, as part of our ten-part London regeneration series, we looked at the proposed plans for the dramatic transformation of Whiteleys shopping centre, which forms an integral part of the vision to renovate an area that is diverse, busy and interesting, but probably in need of some TLC as well.

LH1 London has announced that all the apartments at the new...