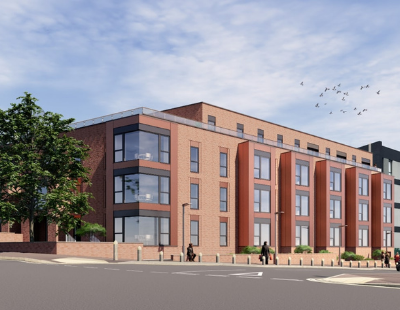 There has been significant development of premium land next to the famous Cadbury World chocolate factory. Plans for 52 apartments have been approved and gone up for sale for offers above £3 million.

Midlands firm Bond Wolf is marketing the cleared site which lies behind Mary Vale Road and Franklin Way in the model village of Bournville in Birmingham.

Previously, the 0.57-acre site was only used as a car park, and benefits from full planning permission for development to proceed on 52 apartments with external grounds and parking spaces included.

James Mattin, managing director agency at Birmingham-based Bond Wolfe, commented: “This is a dream of a development opportunity situated in a prime location at the heart of much sought-after Bournville.”

“The proximity to the Cadbury chocolate factory means future residents will have the pleasurable smell of cocoa in the air as well as being a short walk away from the popular Cadbury World theme park.”

Mattin added: “The freehold site is close to various bus routes and just 150m from Bournville Station on the cross-city Lichfield-Redditch line, giving ready access to the city centre, university and other key destinations.”

The Cadbury brothers moved their booming business into a new, larger factory back in 1847 to Bridge Street in the centre of Birmingham. Bridge Street soon become cramped, so George Cadbury envisioned having their new factory on a very special site, and the search was on. By 1887, the brothers found their new home. The chosen location–a greenfield site which boasted more than 14 acres between the villages of Stirchley, King’s Norton and Selly Oak, just south of central Birmingham.

The factory was initially going to be named Bournbrook, after the cottage and Bournbrook Hall which stood nearby; instead ‘Bournville’ was chosen – combining the name of the trout stream called ‘the Bourn’ with the French word ‘ville’ for town.

George’s plans for the future were ambitious. He wanted to build a place full of green spaces, where industrial workers could thrive away from city pollution, as he once said: “no man ought to be condemned to live in a place where a rose cannot grow.”

Mattin explained that the development land neighbours the five-storey Franklin House, former Cadbury offices that have now been appropriately converted to residential use, while the main Cadbury factory buildings and the Cadbury social club are both around the corner on Bournville Lane.

The planning permission for the development of 52 self-contained apartments has successfully been granted and full details are available via Dropbox access upon request.

This site is one of a number of development opportunities being brought to the market by Bond Wolfe and interested parties can contact James Mattin on 0121 525 0600, 0121 524 1172 or by email at jmattin@bondwolfe.com.

A property near Waitrose could be worth twice as much ...

A property near a Waitrose supermarket could fetch a hefty price...

The £3 billion transformation of Queensway – what exactly are the plans? ...

Last week the £3 billion vision for the future of Queensway...

Herefordshire Council has approved plans for a development that will see...