This week’s auction roundup features a new addition, with Cheffins’ June auction dominated by land lots. Network Auctions anticipates plenty of interest for a personal camping area in Devon, and a Grade-II Chapel in Cheshire was set for a bidding war at SDL Property Auctions. Lastly, Sutton Kersh reports a successful auction in May.

A number of paddock and amenity land lots will be available at the Cheffins property auction on June 15, with a variety of opportunities throughout the region.

Hosted at the Cheffins salerooms in Cambridge, the June auction will follow the live-webcast format, offering buyers the option to bid on the telephone, online or by proxy.

Dominating the 13-lot sale are some five separate land parcels, including:

The highest value lot in the sale is a three-bedroom mid-terraced house on Alpha Road, in the centre of Cambridge. Located within a short walk of the River Cam and in need of refurbishment, the house is offered freehold and has an estimate of £495,000.

Other residential options include a two-acre building plot has full planning permission for a detached house and garage, which has an estimate of £400,000 and a detached timber and flint barn in Freckenham, near Bury St Edmunds, which has the potential for conversion, and carries and estimate of £150,000.

Elsewhere, a large mixed-use property on Churchgate Street in Soham is set to go under the hammer. Comprising a ground floor retail space with six self-contained flats on the first and second floors, the building currently produces £56,690 per annum and offers a ‘fantastic’ retail and residential investment opportunity. It has a presale estimate of £400,000 - £425,000.

Also in Soham is a single storey commercial unit on the High Street, which was previously occupied by Barclays Bank. Currently vacant, the building is predominantly open plan, and provides a prospect for an investor or owner occupier to tailor to their own requirements.

For property developers, there is a site in Sudbury, which has planning permission for six stylish one-bedroom apartments. Planning permission was granted in April 2022, with each apartment also being offered with a parking space. Set on North Street, the site is in the centre of Sudbury, and has an estimate of £200,000.

Ian Kitson, director of Cheffins, comments: “Amenity land has continued to be highly sought after at auction, with price rising significantly over the past three years.”

“Demand particularly sky-rocketed since the start of the Covid-19 pandemic, as the so-called ‘race for space’ has meant that more buyers are in the market seeking out paddocks, grassland and woodland.”

He adds: “The June auction sees a number of opportunities in terms of land, which we expect to draw in a wide range of buyers. Similarly, the residential lots always see a flurry of enquiries from buyers, as both developers and owner-occupiers continue to look to the auction room for the best opportunities.”

Cheffins’ property auction grossed over £10,000,000 in 2021 throughout the East Anglia and Mid Anglia regions.

The auction will take place on Wednesday June 15 from 2pm, and can be viewed online.

A Grade II-listed Chapel with history dating back to the early 1800s was to be sold at SDL Property Auctions’ auction yesterday (May 26), giving budding renovators the chance to live in a truly unique house in the Cheshire countryside.

The auctioneer was set to sell Minshull United Reform Church on behalf of Wheatcroft and Lloyd, which was built in 1806 and goes back to the time of Oliver Cromwell.

The property, on Eardswick Lane, Minshull Vernon, is nestled in between many of the towns and villages south of Cheshire, including Winsford, Crewe and Sandbach. It was guided at £50,000-plus, plus fees.

Renovators could transform the property into a truly unique family home, or convert it into a boutique bar, restaurant, hotel or brewery, subject to obtaining the necessary planning consent. 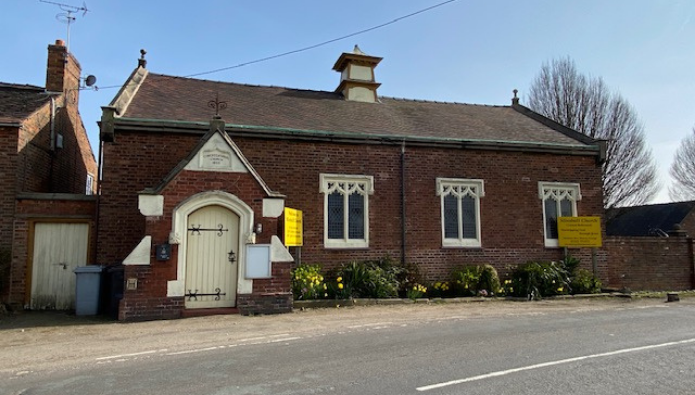 Inside the Chapel sits an altar at the front of the chapel hall, alongside a magnificent pipe organ, and rows of wooden pew benches. The windows are decorated with spectacular stained glass, and it has a pitched timber roof.

The Chapel also currently features a range of kitchen units and brick-built portaloo style lavatories and wash hand basins in the outside area.

Andrew Parker, managing director and auctioneer at SDL Property Auctions, says: “This is such a unique property for people to get their hands on, as it’s beautiful right now but also has so much potential. If living in a converted church or transforming one into a restaurant sounds like heaven to you, why not make the leap of faith and arrange a viewing?”

“This chapel has so much charm to it, and even if you do decide to renovate, the pipe organ, calligraphy at the altar and stained-glass windows to retain the context and character of the building. Given its desirable location, too, it’s an ideal home to access local amenities and nearby cities, while still being in the heart of the Cheshire countryside.”

The property was offered for sale in May’s National Property Auction with a guide price of £50,000-plus fees. The auction took place at 10am. PIT awaits the results which should hopefully feature in next week’s auction roundup.

There has been a lot of speculation around the property market this month amidst the rise in interest rates and the increases of the cost of living and energy bills.

Despite this uncertainty, there still seemed to be a demand to invest in properties. This was highlighted with Sutton Kersh Auctions selling 35% of their lots prior to auction day, which totalled just over £3.9 million.

The auction itself saw multiple bidding wars and resulted in the team selling a total of 82% of the lots offered, equating to a sales value of £8.2 million.

Sutton Kersh offered over 100 lots for its May auction which were a mix of vacant residential, investment and development, as well as land and commercial Lots.

Cathy Holt, associate director of Sutton Kersh Auctions, comments: “Buyers are still keen to invest in the right properties or land and there was a high demand for vacant  residential properties in this auction, with many of them selling for a considerable amount over the guide price.”

“An example of this was demonstrated early on in the auction on lot 7 in L13 Old Swan. This two-bed mid-terraced property in need of a full refurbishment had a guide price of £70,000 and sold for £28,500 over its guide.”

Lot 71 on Townsend Avenue in the L11 area of Liverpool also received a significantly high level of registered bidders. This resulted in a strong bidding war for this three-bedroom middle townhouse, which ended up selling for £46,000 over its £85,000 guide price.

Meanwhile, lot 45 sold for its guide price of £50,000 a ground floor commercial premises, which was a takeaway for 17 years on Utting Avenue.

Sutton Kersh's next auction will take place on July 14.

As the popularity of Devon continues to soar, trying to find somewhere to stay remains challenging. This is where buyers will spot the opportunity, claims Toby Limbrick, director of Network Auctions.

The auctioneer has listed a plot of land for sale in Bideford with a guide price of £25,000-£30,000 – but any future owner is restricted to camp for only 56 days of the year.

Limbrick comments: “We can see the potential for this plot and believe many bidders will also see the attraction.”

“It may have local restrictions, but the half-acre plot is a lovely, elevated spot with sea views. It is situated at Horns Cross with main road access and the South West Coast Path lies to the north with the stunning Devon coast and beaches easily accessible.”

He continues: “The stunning sea views of this plot across to Lundy Island will likely attract people who are looking for a private space they can use for leisure purposes.”

Owners are permitted to fence or hedge their boundary to enable privacy, and utilities including electric and water serve adjacent properties.

“Of course, the new owners can also enjoy the great outdoors camping in their very own piece of the Devon countryside for up to 56 days of the year!” he concludes.

Part 1 – what will property auctions look like in the future? ...

The coronavirus pandemic has affected every single part of the property...