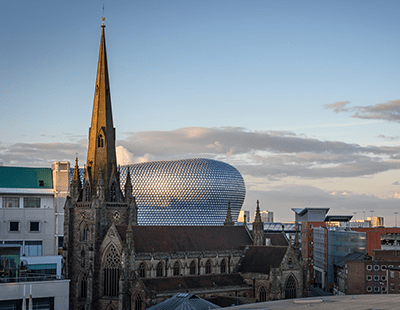 In this guest piece, Marcus Blake, managing director of Berkeley St George City & St Joseph, sets out why the UK's Second City is on the up and particularly appealing to young urban professionals and students.

Birmingham is a city on the rise. With the upcoming Commonwealth Games and the construction of the ambitious Birmingham Curzon Street Station currently underway, the UK’s second city is a rapidly expanding business hub, home to more than 40,000 companies, many of which are startups looking to invest in new talent.

HSBC was the first to see Birmingham’s potential for future investment - moving their UK headquarters and 2,500 staff to a 10-floor building at Centenary square in 2018. This view was compounded by US investment bank Goldman Sachs, which opened the doors to its new offices in Birmingham last year, claiming in a statement that the city “boasts a strong and deep new talent pool”.

At the heart of Birmingham’s steady growth lies a thriving young community. As the youngest city in Europe, with 40% of its population under the age of 25 and a graduate retention rate of 46%, Birmingham offers ample career opportunities for Millennials and Generation Z. And with the city’s infrastructure growing around this new generation of young urban professionals, Birmingham’s property sector must follow suit.

The reason many people in their twenties are drawn towards modern metropolitan areas such as Birmingham is because these hubs are synonymous with entertainment, independence and possibility. It’s not just about living in a place where they can start their professional career and frequent popular venues - it’s also the thrill of being in a city that’s undergoing an exciting transformation.

Birmingham is one such city. The City Council's ‘Future City Plan’, announced in early 2021, aims to transform Birmingham into a world-class metropolis within 20 years by widening its centre by 25%, creating 5,000 new homes and leisure and recreational facilities - an ideal proposition for young professionals looking for a new place to call home.

Since its arrival in Birmingham in 2017, Berkeley St Joseph saw its role in helping to make this vision a reality by raising the bar for urban residential development. To achieve this, Berkeley has introduced a standard of urban placemaking and amenities more commonly sought after by young professionals in the nation’s capital.

Berkeley’s first community in the city, Snow Hill Wharf, a collection of five canalside apartment buildings in the city’s historic Gun Quarter, evokes images of a metropolitan lifestyle that is both attractive and suited to the needs of young professionals, whether single, married, or about to start a young family. Featuring a variety of amenities (including a residents’ lounge, 24-hour concierge service, private parking, cinema room, sauna and gym), Snow Hill Wharf incorporates New York loft-style duplexes mixed with dark bronze ironmongery interiors into its design, selling a modern vision of urban living.

But for true urban comfort, residents require outdoor space for leisure and recreation, as well as internal amenities. Over 40% of Snow Hill Wharf is outdoors, including a collection of three podium gardens overlooking the Birmingham and Fazeley Canal, recognized as part of the sustainable vision for ‘St Chads Greenway’ in Birmingham City Council’s Future City Plan.

Birmingham is currently experiencing its biggest-ever property boom for young people, but not all of them are professionals.

With five universities dotted around the city, Birmingham is used to welcoming large numbers of domestic and international prospective students when evaluating their options for where to study in the UK and its popularity appears to have only grown in the past year. According to Deloitte, in 2021, the city recorded the highest figure for student accommodation applications, with 1,458 beds completed.

International students make up 20% of Birmingham’s student population, and this demographic often seeks high specification accommodation in the city centre and, with its close proximity to Aston University, Berkeley’s Glasswater Locks mixed-use development aims to provide for these demands.

Gaining increased popularity especially among young home seekers, mixed-use developments blend residential and commercial uses into one space, enabling people to more easily integrate their work, home and social lives - the perfect balance for students who will eventually go onto starting new careers in the city.

Located at a canalside location in Birmingham’s Education Quarter and within walking distance from city centre shops, restaurants and offices, Glasswater Locks caters to this growing market.

2022: the sun never sets on Birmingham

Birmingham is a place brimming with talent, energy and potential. It's these elements that have enticed major brands such as HSBC and Goldman Sachs to invest in the city, and why many more will no doubt follow.

As the city gears up to host the Commonwealth Games next summer, 2022 is set to put Birmingham in the global spotlight and further cement its reputation as a leading business and lifestyle destination for countless young people from all over the world.

Property developers such as Berkeley St Joseph have a crucial role to play in selling this cosmopolitan vision of Birmingham, and the likelihood is that prospective students and young urban professionals will be the first to buy into it and flock towards the city. And we’ll need to be prepared to accommodate them when that time comes.

Co-living boom - lets rise by over a third in post-lockdown period ...

Fresh data from one of London’s largest co-living operators has revealed...