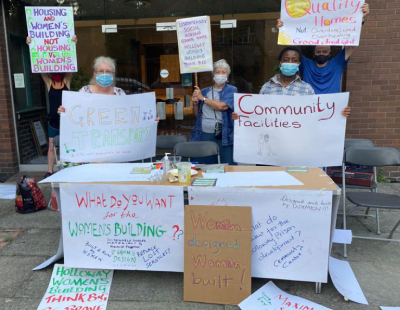 A number of community-led campaign groups are calling for a landmark Women’s Building and social housing on the former Holloway Prison site in North London, bemoaning the current plans’ lack of vision and lack of support for women.

Holloway was the largest women’s prison in Europe before it was closed down in 2016, and has a rich and significant history. Hundreds of Suffragettes were incarcerated there, many of them suffering hunger strikes as they continued their campaigning from within the prison’s walls.

The land was sold in 2019 to Peabody Housing Association, one of the capital’s oldest and largest housing associations, and is set to be the largest new development in Islington for 30 years. The final stages of consultation before the planning application is submitted are taking place this month.

Community Plan for Holloway wants the proposals to include a landmark Women’s Building, but says the current vision does not match up with this. Recent events held as part of the London Festival of Architecture witnessed prominent feminist architects describe their disappointment at the architects’ lack of vision, as well as explaining how women's needs ‘are being sidelined yet again, at a time when violence against women and issues around mental health should be top of the agenda’.

Campaigners want the Women's Building to use innovative creative approaches for wellbeing and for it to be the foundation of a new community in Holloway, alongside new social housing, green spaces, and a co-housing project. The group is also collaborating with Islington Council in an initiative to provide apprenticeships for young people, especially young women, on the site.

It says it has support for the Women’s Building from women's organisations nationally and internationally as well as the support of high-profile female leaders such as Sian Berry and Mandu Reid.

What is the campaign pushing for?

Reclaim Holloway, a coalition of groups and local people fighting for an independent women’s building to be built on the former site of HMP Holloway, has four key asks for the council and Peabody.

They are 1) an extensive, meaningful public and women’s sector consultation and an independent feasibility study to determine space requirements ahead of the planning application; 2) reflection on the history and legacy of the site to be embedded in the design principles; 3) design options offered that look at different, more innovative and iconic solutions (rather than having the women's building relegated to the ground floor of a residential block); 4) A procurement strategy that prioritises women-led businesses from architects to construction workers all the way through to building management.

The opponents to the current plans are split into two groups. Community Plan for Holloway (CP4H) is a formal organisation funded by the Lottery, the London Trust and the Tudor Trust, aiming to provide a voice to the local community on all aspects of the site, including housing, environment, and design. 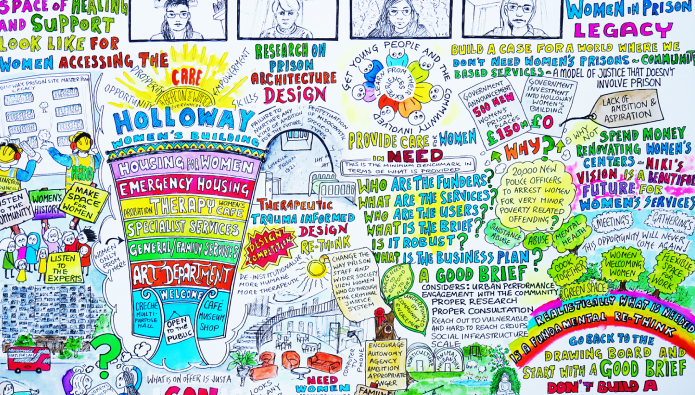 Its directors include representatives of three political parties (Labour, Greens, Lib Dems), the local church, the trades council, and housing and environmental activists.

Meanwhile, Reclaim Holloway (RH) is the main player in the campaign for the Women’s Building, which became one of the group’s demands as far back as 2016 when the prison was put on the market.

RH is entirely composed of volunteers – both men and women - and include some women who have been imprisoned in Holloway, or worked there (as therapists, drug workers, art teachers and social workers). The group also includes architects, planners, a retired magistrate, artists, academics and criminologists.

Niki Gibbs, an artist and member of CP4H’s board of directors, has also created a website – #Justice4Holloway – which outlines the group’s vision for ‘a truly transformative, visionary, sustainable and inclusive Women’s Building serving the future community’.

The campaign groups have been pressing Peabody to include a women’s building providing rehabilitation and refuge services in their plans since the housing association bought the Parkhurst Road site two years ago.

But they say Peabody has only offered a ‘single floor on the bottom of a multi-storey block of flats’ – which the groups argue is not anywhere near adequate.

CP4H says what sets this site apart from all others is its unique legacy. “We believe it can be a visionary model for social housing projects and transformative women’s services, and demonstrate how campaign groups and the local community can work together with politicians, planners and developers to get the best possible outcomes for all,” it said in its response to Peabody’s plan for the Holloway Legacy Women’s Building.

It argues its position can be laid out in the following six ways.

The summer 2021 consultation process is now live, with a dedicated website created to enable people to see the current vision and offer their feedback. As government restrictions ease, Peabody is also now offering limited, in-person briefings for people who aren’t able to access the information online or have questions.

According to the blurb on the consultation website, Peabody says it purchased the site from the Ministry of Justice in March 2019 and is committed to delivering at least 1,000 new homes, including a large proportion of genuinely affordable housing. It adds that its plans are currently evolving on a masterplan for the site.

Working in partnership with developer London Square and the Mayor of London, it says it wants the development to become a place that the whole community is proud of with new homes, community facilities, open space and a Women’s Building.

“Alongside Islington Council we will listen to what is needed so that the Women’s Building emerges as a positive legacy from the site’s history. Ongoing conversations with the community will help shape this,” it insists.

Peabody says the Women’s Building is a unique element of its development proposals and links to the site’s history and previous use. “As a minimum, this seeks to re-provide the support services to vulnerable women that were previously provided on-site when the Prison was operational,” the association adds. “There is scope to provide a range of services and facilities and this continues to be explored.”

It states that it has been working closely with Islington Council and a range of local groups and interest groups to discuss the scope for the Women’s Building, with this work ongoing. 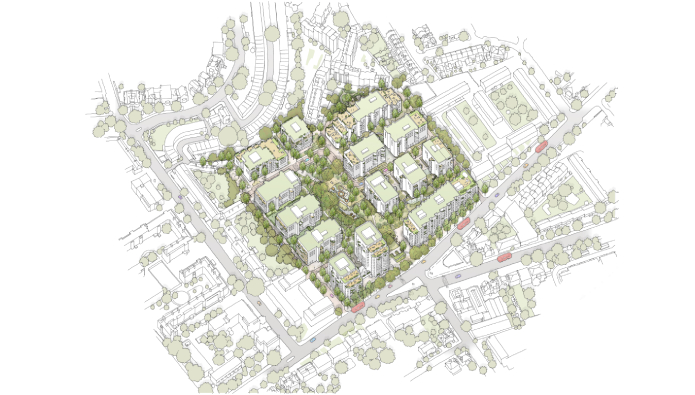 The exhibition boards from the firm’s most recent Women’s Building public workshop event can be seen here.

A Peabody spokesperson told PIT: “The Women’s Building is at the heart of our proposals to help honour the legacy of the former prison site and ensure women can continue to access services there.  At 1,400 sqm, we’re pleased that the new building will be double the size of the facilities inside the prison. We’re also proposing a public, celebratory entrance and a progression from more open and public spaces to increasingly private, safe spaces for women to get support.”

It added: “There will also be a dedicated Women’s Garden, a private, secure space for women to enjoy. Our teams are also looking at how we can recognise the legacy of the place through the design process in the wider development.”

What are Peabody's plans?

A recent Peabody press release said its plans would see the historic site opened to the public for the first time, delivering around 980 homes, a new 1.5 acre public park, and a Women’s Building.

Some 60% of the scheme will be for affordable housing, including hundreds of social rented homes for families and older people (with 42% of the whole scheme social rent), ‘connecting existing Islington communities with the new neighbourhood’.

The car-free development is set to have 2,000 cycle spaces and create new connections throughout the site, ‘with parks, private gardens, and net biodiversity gains’. The association insists most of the social homes will be for families, with additional one-bedroom homes and a community garden dedicated to older residents. 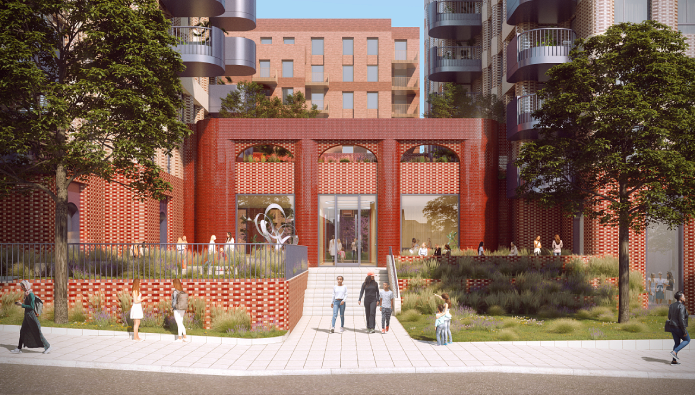 (Credit: Peabody - a CGI mock-up of the proposed Women's Building)

The Masterplanning team is being led by award-winning architects Allford Hall Monaghan Morris, with Exterior Architecture acting as the Landscape Architects.

The latest round of consultation is now taking place, asking for views on the current plans and suggestions on what the new name for the site should be. Some 10,000 households in the surrounding area have been invited to have their say directly.

What is the site’s history?

Opened in 1852 as a mixed-sex prison, it became a female-only prison in August 1902 due to a growing demand for space for female prisoners, with the prison’s male inmates moved instead to Pentonville, Wormwood Scrubs and Brixton.

With a ‘radical’ design which aimed to keep inmates apart but easily observed at all times, the building was described as an imposing Victorian structure – nicknamed the Castle and built as a ‘Terror to Evil Doers’.

Originally, the prison could only house 60 female prisoners, but when the male inmates left in 1902, ‘new wing extensions meant that the building could hold 949 women’. A later wing extension allowed for an additional 101 prisoners.

Some famous names were inmates of the prison, from duchesses to fascists and spies, as well as the aforementioned Suffragettes.

In 1868, public hangings in the UK ended and were instead moved inside prisons, including Holloway – with five ‘judicial executions by hanging’ taking place at the prison between 1903 and July 1955, when the last woman to be executed in the UK, nightclub owner Ruth Ellis, was hanged inside Holloway.

There is little to remember the original Holloway Prison by, except from a small selection of objects kept in the Museum of London’s Social Working History collections store, including the bell hung in the gatehouse of Holloway Prison yard - rung to summon the prisoners to work and exercise.

By 1971, the prison was ready for a total rebuild, which took place between 1971 and 1985 on the same site – with the new prison reflecting ‘a desire to move away from the Victorian justice system’.

“It was designed to feel different to a traditional prison, with accommodation grouped around a number of attractive green spaces, and cells along corridors rather than wings to provide greater privacy. The new building also included classrooms, a swimming pool and a sports hall. The aim was to provide better facilities for the treatment of women in prison,” a page on the consultation website states.

“Despite the good intentions for the new design, the building proved to be difficult to manage. The last inspection of the prison concluded that the ‘the size and poor design make it a very difficult establishment to run’.”

In his Autumn Statement on November 25 2015, then-Chancellor George Osborne announced the prison would shut and be sold on for housing. It officially closed in July 2016, with the prisoners moved to two prisons in Surrey instead.

DTZ Investors has forward-funded a 310-room co-living project in Earlsfield, in...

A property investor has been jailed for failing to declare Capital...