A historic dye works and laundry is being transformed into contemporary new homes by developers Galliard Homes and Acorn Property Group.

This month, the developers revealed a plaque on the original Victorian chimney paying tribute to the site’s rich history, unveiled by Simon Brooks, the great-great-grandson of the founder Alfred Brooks.

The £40 million gross development value (GDV) redevelopment is breathing new life into the industrial site, which ran for over 145 years until 2007. 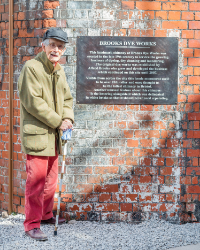 Commenting on the development, Brooks, who recently turned 90, says: “The site is totally different now from its history as an industrial enterprise but the land has been well used. I am very glad the developers have put the plaque up on the chimney, people must wonder about the chimney and this really adds something.”

“Historically, Brooks was a community with our workers living for two or three generations in the area. The new development offers a multiplicity of homes, in such a location, it is likely to create a new thriving community which is great news. It is wonderful to see the history preserved for the next generation.”

There will be a mixture of two-bedroom houses, three-bedroom over garage duplexes, and three and four-bedroom houses centred around the landmark 19th century chimney. There is a stylish show home on site for prospective buyers to see the lifestyle on offer.

The Phase 2 of homes have now been released, a collection of three and four-bedroom houses which will be ready to move into later this summer. The three-bedroom homes offer a private terrace off the main bedroom suite, and both home types offer allocated parking and PV solar panels.

The homes will have open-plan living with a flexible design and a high-quality specification, and each home will have allocated parking or a private garage, with further visitor parking available. 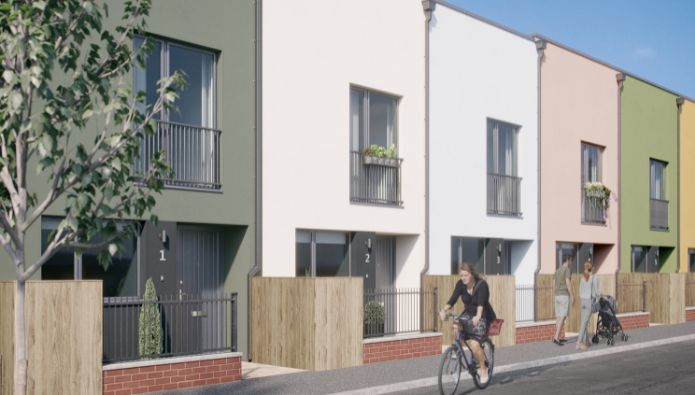 Robin Squire, regional managing director of Acorn’s Bristol office, comments: “We are delighted to unveil the plaque which celebrates the site’s rich industrial history as a successful family-run business which thrived for over 100 years.”

“It takes pride of place on the Victorian chimney, a local landmark, at the centre of our new community. It is wonderful to pay tribute to the site’s history for the new community that will live here as our reimagined Brooks Dye Works comes to life.”

George Baffoe-Djan, head of Galliard’s western division, adds: “We were honoured to welcome Mr Simon Brooks to the site, the great-great-grandson of pioneering Alfred Brooks who founded the successful dye works.”

“For over a century the dye works was a community with generations of employees living in the surrounding St Werburghs area; now, a new community is being created. We have received a fantastic response from buyers for the contemporary homes, with over 90% of Phase 1 now sold out, and our first families moved in.”

The show home is available to visit by appointment. For further information or to book an appointment please contact Acorn Property Group or Galliard Homes.

The two developments, which will offer plots for the open market and affordable housing, are situated in Branston Locks, Burton-Upon-Trent and Priors Hall Park on the outskirts of Corby in North Northamptonshire.

Lovell’s Branston Locks scheme will comprise 190 properties and form part of the wider Branston Locks regeneration which will see the transformation of 400 acres of land to the southwest of Burton-Upon-Trent and the total creation of 2,500 new homes.

Chris Timmins, area director East Midlands at Lovell Partnerships, comments: “We’re delighted that planning permission has been granted for both Branston Locks and Priors Hall Park, meaning that two sustainable communities are on the horizon in areas where affordable, high-quality housing is in high demand.”

“Branston Locks is a key regeneration site in East Staffordshire, and we’re thrilled to be playing our part on one of the UK’s first large urban extensions as well as a second substantial urban extension in Priors Hall Park, Corby, reflecting our status as a major partnerships developer.”

He adds: “Increasing our footprint in the East Midlands is a big focus as our reputation and achievements in the West Midlands continue to go from strength to strength through the delivery of high-quality mixed tenure developments, land-led contracting and design and build contracting.”

Lovell Partnerships has already secured a number of opportunities in the East Midlands, with a pipeline of over 1,000 units since the inception of the targeted growth within the region in 2020 spearheaded by Timmins.

90% of Trilogy scheme sold with only six apartments remaining ...

Planning update – new homes in Ireland and a major partnership ...