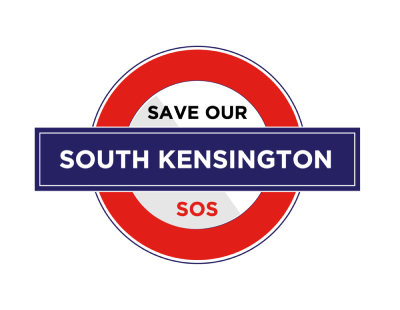 On Thursday night last week, it was announced that the Royal Borough of Kensington and Chelsea's Planning Committee had voted unanimously, by five votes to zero, to refuse planning permission to the Around Station Development in South Kensington.

The application by Transport for London and Native Land was submitted in 2020 and received over 2,900 objections, believed to be a record number of objections to a RBKC development proposal.

Local residents argue that TfL and Native Land did not take their concerns into account on the far-reaching proposals, which they say would have transformed the area beyond recognition and would not result in step-free access to the underground station.

“This is a victory for the more than 2,900 people who objected to the planning application and for the local community who defended the soul of the neighbourhood," a spokesperson for the Save our South Kensington Working Group said.

"Local residents and business owners are not against development and have been urging TfL to improve South Kensington, not destroy its village-like atmosphere by overdeveloping the area. South Kensington, with its iconic buildings and millions of visitors each year, deserves better.”

Residents and local businesses are now urging TfL and Native Land to consult them. The group says it would like to thank everyone who voiced their concerns to the council, the local councillors led by Greg Hammond, and the local MP Felicity Buchan for their help.

A spokesperson for the Native Land and TfL joint venture said: “We are disappointed that the Royal Borough of Kensington and Chelsea’s (RBKC) planning committee has resolved to refuse to grant permission for our plans to restore and enhance the South Kensington Tube station buildings and the surrounding streets. Our plans would generate numerous and significant public benefits, including step-free access to the District & Circle Lines, to be delivered in the first phase of the scheme, on-site affordable housing, and the restoration of the much-loved historic arcade."

They added: "The proposed buildings have all been carefully considered to ensure that the design, scale and massing is sympathetic to the surrounding townscape and respects what is a hugely important heritage location. We believe our plans, which are policy compliant and were recommended for approval by RBKC’s planning officer, who cited architecture of the highest quality, provide for a considered scheme that would help bring a renewed sense of place to South Kensington. We will now review our options.”

The joint venture also said, despite the clear opposition, it had an unprecedented number of supporters (826) for a scheme in London – including support from major local employers and South Kensington’s museums and institutions, including: Baroness Tanni Grey-Thompson, Discover South Kensington, Exhibition Road Cultural Group, Imperial College London, Natural History Museum, Royal Albert Hall, Royal College of Art, the Science Museum and the Victoria and Albert Museum.

Back in June, we reported on the success of the Save our South Kensington campaign in getting the developers to amend their proposals before the application went to the planning committee.

Residents and local businesses against the proposals said TfL and Qatari-backed Native Land's plans were too intensive and on too large a scale.

The campaign group said at the time: “This is RBKC’s oldest conservation area, and the new buildings would overshadow the original 1868 Grade-II listed tube station and the other Grade-II and Grade-II* listed buildings in the area."

It said the proposed new buildings would also block the protected views of the national museums that the South Ken area is arguably most famous for.

The station and the buildings in the neighbourhood are currently of a relatively low scale, helping to give the area a light-filled village-like atmosphere, with 'stunning views of the museums which are beloved by London’s visitors and residents alike'.

The campaign group argued the construction of the planned new, tall, bland buildings would give the area a more impersonal and anonymous feel, with buildings that are out of keeping with the neighbourhood and of a style ‘that completely ignores the local heritage’.

Local residents also argued that by constructing such tall buildings on Pelham Street, an urban canyon will be formed, causing pollution levels on the narrow street to grow by 10%.

Even though TfL and Native Land went away to amend their plans, it appears they didn't do enough to satisfy local officials. Following a marathon three and a half hour debate, Kensington and Chelsea council decided to block the planned oversite development, which would have seen the row of Victorian shops and flats rebuilt behind the retained facade, 'the bullnose in front of the station rebuilt with additional floors, and on the south side where the station is an open cutting, a row of flats built'.

Councillor James Husband, the chair of Kensington and Chelsea’s Planning Committee, said: “We have given this application detailed consideration and rejected the scheme based on significant concerns about the impact of the architectural design, height and massing of the proposals on the Conservation area and listed buildings. Councillors agreed that step-free access to the Circle and District lines would be a benefit, but does not, on balance, outweigh the harm done by the design.”

You can read more about the decision here. It follows hot on the heels of another rejection of a major development scheme, with the government recently deciding to put the dampeners on the plans for the controversial Tulip Tower.

This latest victory shows people power and local activism can still be a powerful force against perceived over-development, no matter how rich and well-connected the developers in question happen to be. Opponents, however, will be concerned about the growing rise of NIMBYism and what this could mean for the future of development and reaching the government's ambitious housebuilding targets.

The seemingly endless growth of Build to Rent continues unabated, with...