One of London’s busiest and most iconic areas has announced that it has become carbon neutral (as of November 11 2021).

The King’s Cross Estate, which is owned and managed by King’s Cross Central Limited Partnership (KCCLP), says it has become carbon neutral by achieving CarbonNeutral Development certification for each of the buildings within KCCLP’s ownership.

Natural Capital Partners has provided the certification, in accordance with The CarbonNeutral Protocol. Originally developed and published in 2002, The CarbonNeutral Protocol is seen as one of the leading global frameworks for carbon neutrality and is revised and updated annually to reflect developments in climate science, international policy, standards and business practice.

As a result of green tariffs and direct agreements with energy providers, energy supplies to King’s Cross are now 100% renewable, with electricity procured from REGO certified green electricity tariffs and gas supplied by an anaerobic digestion facility in Scotland, alongside green gas certificates.

By switching to 100% renewable gas and electricity, King’s Cross says it is avoiding 19,729 tonnes of CO2e per annum from being released into the atmosphere.

The area is also home to one of the UK’s most advanced district heat networks - which is now powered solely by renewable energy. The on-site heat network consists of boilers and CHP engines that supply heating and hot water to the 1,120 homes and two million square ft of offices, retail and food and drink premises across the Estate.

What’s more, the CHP engines generate electricity which powers the Estate’s 'unique district cooling network', providing cooling to a quarter of the buildings on the Estate.

King’s Cross has, as well as moving to completely renewable energy, taken the bold step of offsetting 100% of its past embodied and operational emissions.

For example, past emissions totalling 174,145 tonnes of CO2e have been offset through two third-party verified carbon offsetting projects, with both projects delivering carbon offsetting credits through the UN Clean Development Mechanism (CDM).

Yesterday, King’s Cross also revealed its ambitious plans to more than offset all embodied carbon from new and future buildings on the Estate through the creation of new UK forests. To this end, it is acquiring approximately 338 hectares of pastureland onto which more than 600,000 broadleaf natives and commercial pine trees will be planted.

It says these new forests will be capable of removing around 153,000 tonnes of CO2e from the atmosphere over the next 60 years.

King’s Cross says it is working with Tillhill, leaders in forestry management, to deliver this forest and the carbon sequestration will be verified by the UK Woodland Carbon Code (WCC). 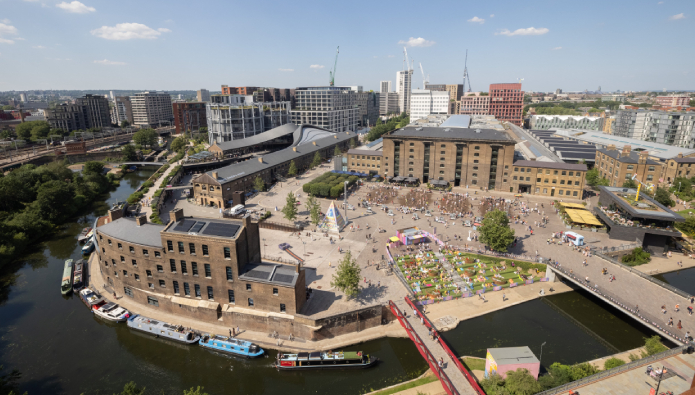 The area is also going one step further in supporting the UK’s path to net-zero by 2050, by helping to add new renewable capacity to the national electricity grid.

KCCLP has agreed terms for a Power Purchase Agreement with a renewable energy developer which will see King’s Cross help to fund a new solar farm in southern England. Once operational, this solar farm is set to supply the equivalent of the baseload annual electricity requirement for the King’s Cross Estate.

King’s Cross has also signed the World Green Building Council’s Net Zero Carbon Buildings Commitment, a ‘front-runner’ to the UN’s global Race to Zero campaign, which is the world’s largest commitment from private and public organisations to fight for climate action.

Robert Evans, chief executive of King’s Cross and joint managing partner of Argent, said: “King’s Cross has always been a place for people and the planet to flourish. As a mixed-use regeneration of a brownfield urban site, that is built around public transport, walking and cycling, and the creative conservation of historic buildings and spaces, King’s Cross has the principles of sustainability embedded in its DNA.”

He added: "From the very beginning we have worked to reduce carbon emissions and low carbon thinking has been central to our approach. This is demonstrated by early decisions to invest in our district energy network and deliver combined heat and power to the whole Estate, and our development of more BREEAM ‘Outstanding’ buildings than any other destination in the UK.”

He went on: “King’s Cross becoming carbon neutral is a major step in our journey towards being net-zero, and it delivers on the aspirations of all those who own, work, live and spend time here.”

Claudine Blamey, head of sustainability and digital strategy at King’s Cross, added: “This is a significant milestone in our journey to become net zero. We are incredibly proud to achieve carbon neutrality and our universal approach to our carbon footprint means we leave no stone unturned. This is part of our commitment to set a precedent of best-in-class climate action in the real estate sector and encourage others to use their funds in the most effective manner to have the greatest impact.”

Seen as something of an insalubrious no-go area in the 1980s and 1990s, and home to an infamous red-light district, King’s Cross has been transformed in the last few decades thanks to significant investment and improvement works.

It’s now home to two magnificent stations, playing host to London’s Eurostar terminus and a vast number of domestic routes, and has become somewhat of a cultural, foodie and clubbing hotspot. Its reputation as a notorious destination has long since gone, and you are now far more likely to encounter families, tourists (many grabbing selfies at platform 9 and ¾) and hipsters enjoying the shops, restaurants and cultural venues that surround the station.

The King’s Cross Estate recently celebrated its 10-year anniversary, marking a decade since its first building and public spaces opened. Held up as one of London’s most successful regeneration projects, King’s Cross has quickly become one of the capital’s fastest-growing and most vibrant districts, bringing new jobs, new homes and new retail, dining and leisure amenities for Londoners.

The anniversary also marked 20 years since the publication of the Principles of a Human City, a ‘pioneering document’ which was published in 2001 and set out the 10 principles which have underpinned the design and development of King’s Cross, ‘with a focus on creating a robust urban framework and lasting new place; and promoting accessibility and a vibrant mix of uses’.

Beginning shortly after the new millennium, the regeneration scheme has transformed what was a derelict and underused railway and industrial site into a buzzing office, residential and retail site.

It’s become a new office district for London, establishing itself as a hub for creative, digital, and knowledge-based businesses - home to 2.1% of all creative, digital and cultural jobs in London’s Central Activity Zone, representing a 20,000% growth in ‘knowledge’ jobs in the King’s Cross neighbourhood over the past decade. In 2021, close to one million sq ft of new office space has been delivered despite the pandemic, and there is currently 0% vacancy across the whole office portfolio. 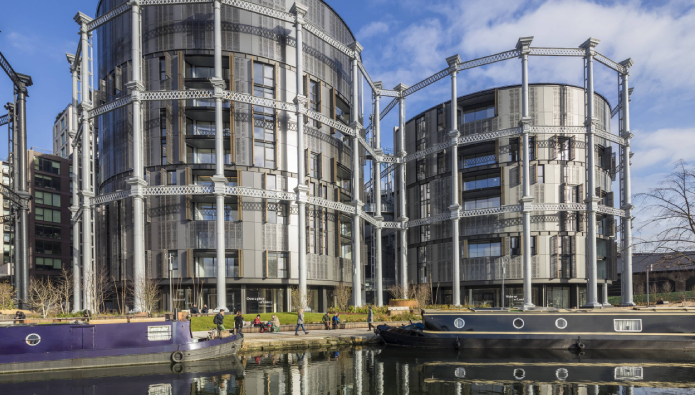 Additionally, it’s become a thriving residential neighbourhood, with 1,120 homes and 750 student residences. Construction of a further 623 homes and 450,000 sq ft of office space is currently underway, which means more than 40,000 people will live, work and study in the neighbourhood once the development is complete.

Once one of London’s industrial heartlands, the regeneration of King’s Cross has attempted to bring together the area’s rich industrial heritage - evidenced in the 20 repurposed historic buildings, including the iconic Gasholders London and Coal Drops Yard, the Victorian coal buildings which have been reimagined by Thomas Heatherwick – with modern architecture inspired by the history of King’s Cross.

Public realm changes have been at the forefront of the regeneration of King’s Cross, with the establishment of Granary Square, Cubitt Square, Cubitt Park, Gasholder Park, and the Bagley Walk ‘high line’.

Over 40% of the Estate is public realm, including green parks and gardens, new public squares and streets, with Granary Square and its fountains at its heart.

“King’s Cross is a vibrant area with a distinct character and lots of energy. In the past ten years it has completely transformed into not only a key office district for London, but a thriving residential neighbourhood,” Mayor of London Sadiq Khan said. “The urban regeneration of King’s Cross is a prime example of just the kind of innovation that will help encourage Londoners and domestic and international tourists back into the centre of our city and support our economic recovery from this devastating pandemic.”

While some will bemoan parts of King’s Cross becoming too unaffordable and exclusive, with too much focus on attracting tourists and wealthy young professionals, there are few who would prefer a return to the dark days of the 1990s – when King’s Cross had a reputation for all the wrong reasons.

A modular housing and technology company backed by the Rueben Brothers...

Introducing Capella – a last chance to buy in King’s Cross ...

Ghelamco - which is well-known for the creation of sustainable, energy...