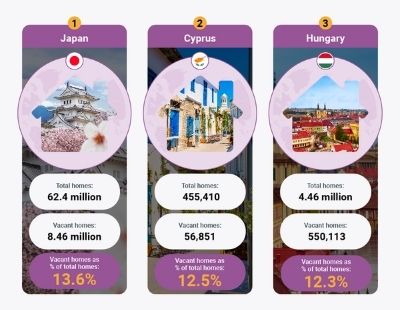 By analysing The Organisation for Economic Co-operation and Development data, the mortgage experts were able to reveal the countries where empty properties make up the biggest proportion of the total housing.

Why are vacant properties a problem for the property market?

Research such as this is helpful as it helps understand issues such as homelessness and supply and demand discrepancies.

Currently, the housing market is a competitive one because there is a low supply of housing inventory and demand for properties. The fact that there is also high number of properties are sitting vacant further adds to the housing issue.

Furthermore, approximately 100 million people are homeless while millions of homes around the world are unoccupied and unused.

Which countries are the worst offenders?

England has one of the highest homelessness rates in the world. Around 289,800 people live without a home while a higher number of properties around the country remain vacant. Overall England ranked 20th place in the research.

Japan ranked first place for the country with the highest number of empty homes with a shocking 13.6% of homes in the country remaining unused and desolate.

Hefty tax fees could be the reason for the high number of empty homes across Japan. According to Japan Property Central if the property is a second home or rented out, the tax rate is 2% of the fixed asset value. As a result, the second-home tax may steer Japanese citizens away from the idea of inheriting any relatives’ properties.

Another reason for the high amount of vacant homes in Japan could be the ageing population and a decline in the birth rate. while senior citizens are living longer than ever, the number of births in the East Asian country continues to fall which could contribute to a lack of demand for property purchases.

Cyprus ranked as the second country with the highest number of empty homes. Around 56,851 empty properties exist in the country. This accounts for one in eight homes on the Mediterranean island. The research shows that many of the empty homes are in Varosha.

The research also uncovered that although Japan had the highest percentage of empty homes, it could re-home its homeless population the quickest. This is because in comparison to its overall population of 126 million only 3,992 are homeless, meaning that just 0.05% of its empty homes would be needed to house every homeless person in the country.

Below is a table showing the top 10 countries with the most empty homes.

Empty homes could ease housing shortage - how could investors help? ...

A trade body has claimed that new financial incentives are needed to...