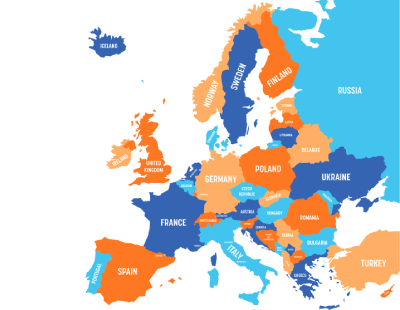 Global property firm Knight Frank says it has seen a rise in expats buying in their home country for a 50/50 property – giving them a base in both their country of origin and their adopted home, and providing added flexibility in these Covid times we live in.

“We carried out a survey of our prime agents, with regular calls to our global agents in Europe, Asia and the US. It came to light that multiple agents were seeing an uptick in expat enquiries,” Kate Everett-Allen, partner and head of international residential research at Knight Frank, said.

According to the survey, 64% of expats said lockdown had influenced their decision to move home. Some 57% were looking for a 50/50 home in their home country – initially to use as a second home, or to rent out, then as a long-term residence in the future. Meanwhile, 29% were making a permanent move. And 14% said they wanted a second home.

What are the latest trends for international investment/moving?

“Our survey found that 62% of expats are looking for a detached home with outdoor space, while 24% want a penthouse, 9% want a ski chalet and 5% want a farmhouse or rural abode,” Everett-Allen added.

“Many global buyers are corporate types and rural is a step too far for them. They prefer suburbia, on the outskirts of major cities.”

Some of the key motives for moving are to be closer to family or support networks. Work or a new job offer was the second most popular motivation, while better healthcare was in third, followed by education.

“The relocation is mostly happening for those a six-hour plus flight from home – so Brits based in Asia or Australia looking to return home. Or Canadians based in Asia wanting to get back to Toronto or Ottawa.”

Everett-Allen says there has also been an increase in demand for ski properties in places like the French Alps, with a particular increase in enquiries from French expats in Asia.

“They want a base in the French Alps because of their grown-up children being based in London, Geneva, Paris or Berlin. They also want the fresh mountain air and outdoors life that the French Alps provides,” she explained.

Has there been an increase in the number of expat retirees looking to relocate due to Covid-19 and Brexit?

“People are now thinking about it again, with Brexit only three or four months down the line, but there are so many potential complications. There is expected to be reciprocal agreements between the UK and individual EU nations regarding the right to move around Europe, with things like the Settlement Scheme on offer for both Brits in Europe and Europeans in Britain.”

She says there has been an uptick in interest in places like France and Spain, but it is difficult with the quarantine restrictions currently in place.

On the other hand, she argues, there is likely to be more opportunities for Golden Visas post-Brexit – in places like Greece, Portugal and Spain – as Brits will be counted as non-EU residents. The Golden Visa offers benefits like Schengen Area access for those investing a certain amount in a country.

What if a Brexit deal isn’t negotiated?

If Westminster and Brussels can’t reach a trade agreement before the transition period comes to an end, what will the impact be on British investment in Europe and vice versa? Is it vital that a deal is agreed?

“So much detail yet to be decided,” Everett-Allen said. “So it’s hard to know at the moment. But it’s clear healthcare is going to be a vital component in investment moving forward. Around 30-50% of our expat clients are now considering healthcare, even more than education, when choosing their destination – as a result of Covid-19 worries.”

“Healthcare has come to the fore. Places like Germany and Switzerland, which have – although it changes every day – relatively speaking managed the virus fairly well, are seeing an uptick in interest from second home buyers in particular.”

You can see Knight Frank’s most recent Global Residential Outlook findings, which suggest that the second home market has been surprisingly buoyant in countries such as France, the US, Australia and New Zealand despite Covid-19 restrictions, as domestic buyers step in to fill the gap left by international purchasers, by clicking here.

Homes that may appeal to returning expats

With the risk of a second wave of Covid-19 looming and as the UK prepares to leave the EU, research by Canada Life, published a few weeks ago, found that almost half (46%) of over-50s who are planning on moving abroad when they retire are reconsidering where they might retire to, due to Brexit, with a further 44% claiming the uncertainty is making them reconsider their plans altogether. When it comes to Covid-19 concerns, these figures are 39% and 37% respectively.

This, coupled with Knight Frank’s findings that more expats are looking to buy in their home country – for a base as well as somewhere that they might consider returning to on a permanent basis one day – means that upmarket residences in London could be witnessing increasing interest for the rest of 2020.

For wealthy buyers and returning retirees keen on investing in the prime end of the market, excellent location, concierge services, five-star on-site amenities and ease of access are likely to be very important factors. Furthermore, they are likely to be looking for the ideal safe and secure lock up and leave solution if they are opting for a 50/50 residence.

Below are a few flagship London developments which may now be experiencing heightened interest.

An entirely new neighbourhood in Belgravia, developed by Qatari Diar Europe, Chelsea Barracks is transforming the former British Army Barracks into a 12.8 acre scheme comprising a unique collection of residences, townhouses, penthouses and a mews house. Some phases of the development of the scheme have been completed, with others ongoing. Five acres of the scheme will be garden squares, providing ‘spatial freedom’ that is a rare find in London.

But it is only for those with very big budgets, with prices for a two-bed apartment starting from £5.25 million and townhouses starting from £38 million. 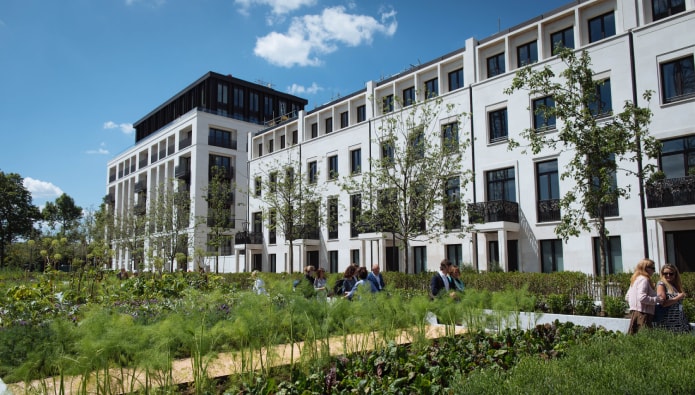 Situated on London’s oldest garden square, The Residences at Mandarin Oriental Mayfair, London by Clivedale London will comprise 80 luxury apartments on Hanover Square. Designed by Rogers, Stirk + Partners, the residences will be fully serviced by the integrated, 50-key Mandarin Oriental hotel, providing residents with a full suite of services and amenities, including in-residence dining and housekeeping, 24/7 concierge, valet parking, an opulent spa and a roof terrace bar overlooking Mayfair.

Retirees looking to split their time 50:50 between the UK and abroad can benefit from an exclusive programme put together by Clivedale and Mandarin Oriental, with apartment owners given the opportunity to put their residence into the hotel rental programme for up to 90 days a year, while retaining use of their apartment for the remainder of the year.

The management of rentals and maintenance of the residence while the owner is away is fully handled by Mandarin Oriental hotel staff. Prices start from £2.95 million. 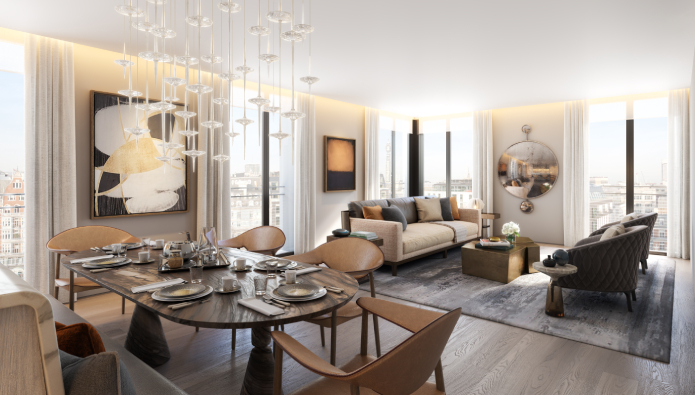 Another scheme from developer Clivedale London, Mayfair Park Residences is a partnership with Dorchester Collection to deliver the iconic hotelier’s first branded residential scheme. With views over Hyde Park, residences range from generously proportioned one-bedroom pied-a-terre’s to two, three and four-bedroom private apartments and townhouses, and an eight-bedroom penthouse with a rooftop pool. 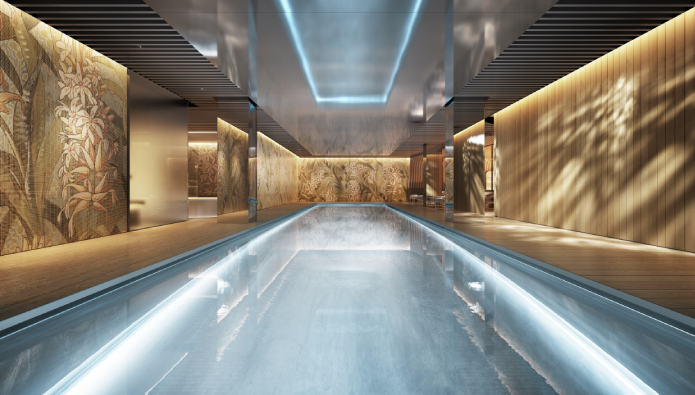