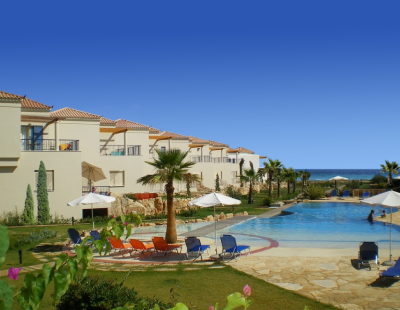 Greece’s property market had only just started to get back on its feet after the years of devastation and austerity wrought by the global financial crisis and the country’s well-documented economic issues.

Then along came Covid-19 and national and international lockdowns, putting property markets across the globe in freeze mode.

However, despite the disruption caused by Covid-19, the outlook for the market is ‘buoyant’ following the start of two new government programmes to attract European pensioners and non-domestic residents to support the wider economy. Greece has been widely praised for its handling of the Covid-19 pandemic, with the number of cases and deaths kept very low, and strong early action taken when the virus started to hit Western Europe.

Leptos Estates, a leading Greek developer, predicts a strong Q4 as travel begins to reopen globally. The company has witnessed a surge in interest, receiving daily enquiries from buyers at its Crete development, Aphrodite Beachfront.

Commenting on the new government programmes, Pantelis Leptos, deputy president of the Leptos Group of Companies, said: “The new government initiatives can potentially spark a new golden age of investment in Greece. The strong range of incentives, healthy outlook for the Greek real estate market, the exceptional lifestyle on offer and the government’s success at combatting Covid-19 will be a real draw across the globe.”

He added that the success of the Golden Visa programme has demonstrated there is a real appetite for Greek property, ‘drawing approximately 10,000 investors to date’. The new programmes will complement the existing offering to improve Greece’s appeal to investors.

As lockdowns have eased globally – albeit with local ones being reintroduced in many countries to manage local spikes – purchasing power has returned to regions like South East Asia, with Chinese interest particularly strong. Things are now picking up from where they left off with the impressive results seen in Q1.

Leptos Estates says that, although initial predictions of a record year have been reduced, the outlook is positive moving into the latter third of the year.

Looking ahead to Q4, the Greek government’s two new programmes are designed to champion investment in the country’s real estate market. Early August saw a new programme begin, offering European pensioners a flat tax rate of 7% across their global income if they choose Greece as their fiscal residence.

The scheme will enable residents to benefit from higher disposable incomes, for those looking to retire abroad and embrace all life has to offer in Greece. The only requirement is that Greece has a ‘Double Taxation Avoidance Treaty’ with the country of origin of the pensioner.

As well as the programme for European pensioners, the start of the year saw another programme launched for non-domiciled (non-dom) residents, with those who invest €500,000 in property becoming eligible to move their fiscal residence to Greece and a flat maximum tax of €100,000 across global income. The generous scheme has already proven attractive in the Asian markets, as well as the Middle East and Russia.

“Greece has also seen improvements in infrastructure across the board,” Pantelis Leptos added. “The government's handling of Covid-19 has been impressive, amongst the best in the world, making Greece not only an appealing destination, but a safe environment. There have also been improvements to the application system, which is on track to be 99% online by October to aid applicants in buying property.”

With lockdown leading many to re-evaluate their needs, one thing purchasers have been keen to experience is the health benefits and lifestyle of the Greek islands, Leptos Estates claims.

Since restrictions have lifted, the firm has seen a surge of interest at Aphrodite Seafront in the isle of Crete, known for its rich culture and stunning vistas.

The award-winning Aphrodite Beachfront is situated in a prime position in Chania, Crete, boasting ‘magnificent views ‘of the Mediterranean Sea and surrounding mountains, as well as being moments away from pristine beach.

The development, described by the developer as ‘unique’, is located in the prestigious area of Pirgos Psilonerou and displays an ‘intricate mix of design, comfort and construction, inspired by the true essence of Mediterranean living, using locally sourced materials throughout’.

A mix of one, two and three-bedroom apartments, panoramic penthouses with rooftop gardens, three-bedroom maisonettes and villas surrounded by landscaped gardens are on offer to residents.

“The upcoming Brexit deadline has stirred the UK market into action,” Pantelis Leptos said. “We have had enquiries at Aphrodite Seafront from a number of entrepreneurs who have been looking for a lifestyle change for themselves and their families and to maintain access to the EU free trade agreement.

He added: “For those looking for a holiday home or a permanent residence, Aphrodite Seafront is a fantastic destination. One in every five euros in Greece is spent on tourism and associated travel owing to the country’s rich history, culture and stunning scenery, as the tourism market thrives and demand for rentals in prime positions are increasing.”

Offering an extensive after-sales support service and rental guarantees, Leptos Estates counts itself as one of the leading providers of new homes in Greece and Cyprus.

Are there restrictions on travelling to Greece?

Those returning to England from the Greek mainland or islands currently don’t need to self-isolate for 14 days, but pressure is growing on Number 10 to change that stance as both Scotland and Wales have introduced new measures over concerns about rising cases of Covid-19.

The Scottish Government announced on Tuesday evening that travellers from Greece would need to quarantine for 14 days from Thursday (yesterday), while Wales also started asking arrivals from the island of Zante to begin a period of self-isolation – triggered by a high-profile incident involving a plane returning to Cardiff from the popular party destination, where all passengers were advised to quarantine and take two separate Covid-19 tests after more than 20 cases were confirmed from that one single flight.

Yesterday, the Welsh government added the Greek islands of Mykonos, Zakynthos, Lesvos, Paros and Antiparos and Crete to its quarantine list, meaning returnees will need to self-isolate for two whole weeks from 4am today. The Welsh government said it was acting following 'clear advice from the Joint Biosecurity Centre (JBC) ... that travel from (these countries) constitutes a public health risk'.

However, the UK government, which also receives the same advice, said it was making no changes to its quarantine list/travel corridors - which means those returning to England from Greece and its fellow holiday favourite Portugal need not self-isolate for 14 days.

This is despite several people testing positive for Covid-19 after arrival on a flight from Greece into Stansted Airport.

In the seven days to August 31, there were 14.0 coronavirus cases per 100,000 people in Greece, down from 14.9 a week earlier and below the seven-day rate of 20 which is the threshold above which the UK government considers triggering quarantine restrictions.

Greece’s tourism minister Harry Theoharis insisted the country has ‘a much lower number of infections compared to most other countries in Europe’, and told the BBC Radio 4’s Today programme: “We’re actually in the right direction. We’re going down in terms of the average numbers.”

He added: “We’re taking specific targeted measures where we see specific concentrations of cases. Measures that have been successful and have been working in the past few days. We’re doing everything in our power to ensure that every person that comes from the UK is kept safe in Greece.”

Tourism is absolutely vital to Greece’s economy, and Brits play a hugely important role in this industry. They are the country’s most lucrative European market, with more than 3.5 million visiting in 2019.

You can find the latest foreign travel advice for Greece here.

Investors - should Greece be back on your investment agenda? ...

The outlook for Greece’s property market is buoyant, off the back...