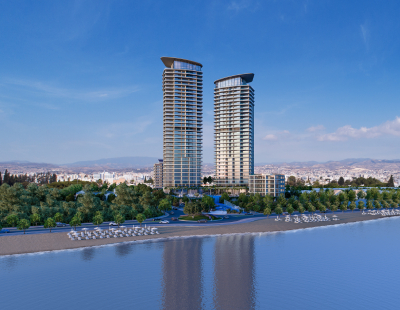 There are historic ties between the UK and Cyprus, the country has dealt impressively – like its near neighbour Greece – with the pandemic, and it remains on the UK government’s quarantine exemption list.

That means there is no obligation for people returning from Cyprus into England to self-isolate for 14 days.

All of these things – plus the weather, relaxed lifestyle and existing popularity of Cyprus as a holiday and second home destination for Brits – should make it a strong candidate for those considering investing in property overseas.

The development has proved a ‘huge success’ since launching, with residences in the first phase picked up by a wide range of international customers, who were taking advantage of ‘the excellent investment opportunity on offer’.

Now, Leptos Estates is releasing a fresh collection of residences on floors 23 to 26 to market, all with guaranteed sea views. Residences in the Limassol Blu Marine range in size from one-to-five-bedrooms with prices starting from €650,000.

“The sales of properties to date at the Limassol Blu Marine have been fantastic,” Pantelis Leptos, deputy president of Leptos Estates, said.

“We’re so pleased to be able to release the luxury residences on these higher floors which will be available to buyers who may have missed out first time around.”

“We think the glistening views of the Mediterranean and attractive luxury apartments will be a real draw for buyers looking to invest in Europe’s newest riviera.”

“You also can’t forget the year-round sunshine as an added benefit!”

What do investors get?

Limassol Blu Marine says it offers the highest level of lifestyle offerings and ‘world-class hotel style services’ including a 24/7 concierge team on hand to assist residents, property and retail management, housekeeping and security. It’s described as being perfect for investors looking for a ‘lock up and leave’ property or a ready to rent home.

The elevated podium in between the three imposing towers at Blu Marine (named after the Greek gods Poseidon, Zeus and Oceanus), will host a ‘spectacular’ 50 metre infinity pool, beautifully landscaped gardens, a double height gym, bistro and residents’ lobby and concierge.

Residents will have access to over 1,300 square metres of luxury health and wellness facilities, including treatment rooms, sauna and steam rooms, and a naturally-lit 25 metre heated indoor pool.

According to Leptos’ in-house sales figures, Asian buyers make up around half of sales so far at Blu Marine, whilst Middle Eastern, Russian and European buyers add to the cosmopolitan mix.

Delving deeper into these figures, Pantelis Leptos added: “We believe that the great international demand at Blu Marine stems from not only the exceptional residences available, but also the major infrastructure developments taking place in downtown Limassol, and new neighbourhood Aktaia Odos.”

“These investments include the brand-new Limassol Marina, perfect for super yacht spotting, the state-of-the-art Dubai World Cruise Terminal, revamped seafront park, integrated golf, spa as well as the casino resort and contemporary shopping mall. All this positive regeneration in downtown Limassol has attracted a lot of international attention.”

The new neighbourhood of Aktaia Odos is being master planned with state-of-the-art, modern buildings covering residential and commercial, tourism and leisure. It sits among large open green spaces, bicycle lanes and pedestrian walkways.

There is also substantial restoration of local heritage sites, to help bring Limassol in line with large-scale regeneration projects such as London’s Canary Wharf.

Today, Downton Limassol – with its mixture of cafes, restaurants and international schools, as well as its favourable tax regime – plays centre stage to the ‘city’s vibrant entertainment, business and leisure scene’.

“We believe that the sales successes at Blu Marine further stem from the benefits afforded by the Cyprus Investment Programme. Buyers and their families feel safe in the knowledge that an investment at Blu Marine means they’re getting a world-class luxury residence, as well as an opportunity to live, work and study in Europe,” Leptos said. 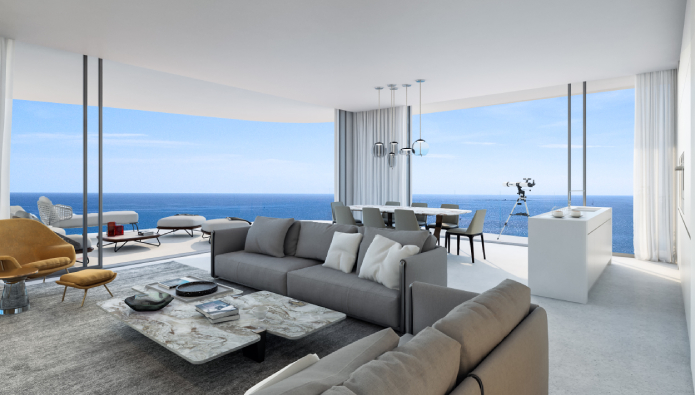 Overseas buyers at Blu Marine can take advantage of Cyprus’s Investment Programme, by purchasing one or multiple properties of €2 million.

Non-EU citizens qualify for a Cyprus citizenship, allowing them to travel, work and live within the EU and Schengen zone – something that may be more appealing to British buyers now that the UK has left the EU, with the transition period set to come to an end on December 31 2020.

The sales teams at Leptos Estates say they are now available to welcome customers to Blu Marine’s newly opened Sales & Marketing Suite and to facilitate viewings for the final collection of residences.

The first residential tower, Poseidon, is expected to complete in 2022. Apartments start from €650,000. For more information, you can contact the Leptos Group UK office by phone or email (info@limassolblumarine.com or info@LeptosEstates.com).

In the know – lowdown on Cyprus

An island country in the Eastern Mediterranean, Cyprus has a population of only 1.2 million but is still the third largest island – after Sicily and Sardinia – in the Mediterranean Sea.

Although geographically in Asia, and surrounded by many Middle Eastern countries, Cyprus is politically a European country and a member of the European Union.

A British territory until as recently as 1960 – one of the legacies is the fact that they drive on the left in Cyprus – the country’s recent past hasn’t been without issues. After gaining independence from the UK sixty years ago, a constitution which guaranteed a degree of power-sharing between the Greek Cypriot majority and the Turkish Cypriot minority was agreed, but the two populations – with backing from the governments of Greece and Turkey, respectively - clashed in 1974. 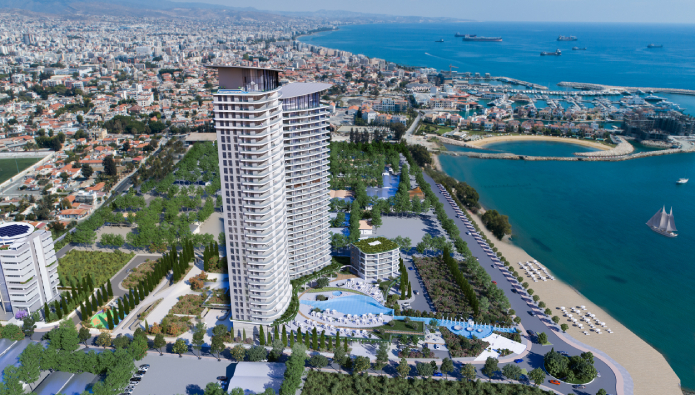 The end result saw Turkish control of the northern and eastern 40% of the island. In 1983, the Turkish-held area declared independence as the Turkish Republic of Northern Cyprus. However, only Turkey currently recognises the TRNC, with all other governments and the United Nations recognising only the government of the Republic of Cyprus over the whole island.

The UN still operates a peacekeeping force and a narrow buffer zone between the two Cypriot ethnic groups – however, open hostilities have mercifully been absent for some time, as the two sides (with the growing support of the EU) gradually inch towards a reunification of some description.

Even now, the UK holds two small Overseas Territories on the area of the Republic of Cyprus, known as Akrotiri and Dhekelia, comprising of a few parts of villages and two military bases.

A number of Cypriot locations – including Limassol, Paphos, Larnaca and Ayia Napa – have become popular destinations for British holidaymakers, particularly among younger generations keen to take advantage of the nightlife on offer.

The capital, Nicosia, is the country’s largest city and also holds the dubious title of being the world’s last divided capital city. It is two capital cities in one, with a Greek side and a Turkish one.

One of the oldest civilisations in the Med, with a history spanning more than 10,000 years during which it has changed hands many times, Cyprus has a rich culture and cultural scene, a strong love of football and a cuisine which combines European, Middle Eastern and Arab influences – with halloumi arguably being its most internationally famous product.

There is estimated to be around 300,000 Cypriots living in the UK, particularly concentrated in North East London, with significant communities in other British cities such as Birmingham, Leeds, Cardiff, Nottingham and Bristol. By contrast, around 60,000-70,000 British expats reside in Cyprus.

What are the current travel rules?

Since July 4, Cyprus has been exempt from the FCO advice against all non-essential international travel, based on the current assessment of Covid-19 risks.

However, travel is subject to entry restrictions. As of August 1 2020, the UK has been in Cyprus’s Category B. This means that tourists are permitted to travel to Cyprus, but they need to provide a negative test on arrival, obtained within 72 hours before travel.

On July 31 2020, the Republic of Cyprus government announced that Covid test results can be in the form of an email or SMS, but the test result itself and/or appointment letter must include the date and time when the test was taken.

You can find out more about the comprehensive entry requirements here.

While the UK has left the EU, the rules on travel to EU countries stays the same until December 31 2020 while the UK and EU thrash out a trade deal and negotiate additional arrangements. The government’s foreign travel advice page on Cyprus will be updated with country-specific information for travellers as things change.

Typically, around one million British nationals visit Cyprus every year, with most visits trouble-free.

Cyprus’ property market is at an 11-year high, following a rush...