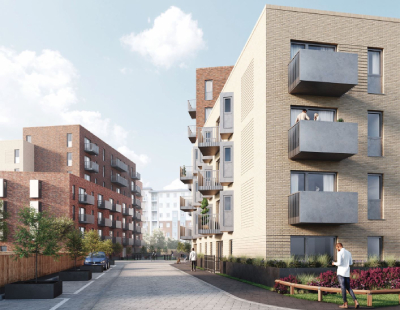 Slough is benefiting from the property market’s post-lockdown mini-boom, with a major developer in the area saying it is continuing to see strong buyer activity for its next luxury apartment development.

SevenCapital, a leading UK off-plan property developer and investor, which has a particular focus on Birmingham and large regional towns in Berkshire, Hampshire, Worcestershire and Oxfordshire, has revealed that its new scheme in the heart of Slough is now 75% sold ahead of completion, as demand for homes in the UK continues to rise.

The Metalworks, a private, gated development featuring a total of 155 studio, one and two-bedroom apartments across two blocks, Steel House and Iron House, is located off Petersfield Avenue, just a two-minute walk from Slough train station (which will be on Crossrail 1 when that is finally fully operational).

This comes as recent headlines revealed the property market has bounced back since lockdown, with buyers and renters both re-evaluating their priorities when it comes to their living space. Increasingly, they are looking to areas outside of London and closer to the country. 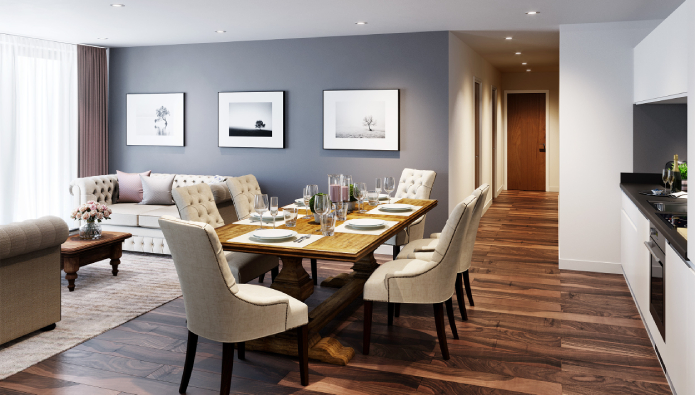 Andy Foote, director at SevenCapital, commented: “The strong sales ahead of the completion of The Metalworks pay testament to Slough’s growing popularity as a place to live, work and invest. With its easy commute into London, Slough has increasingly appealed to workers in the capital wanting more space for their money and a more relaxed home life.”

He added: “As working culture shifts from office-based to working-from-home, increased space now ranks even higher as a priority, which areas outside London such as Slough can offer in abundance and at a lower premium versus the capital.”

Slough offers an 18-minute commute to London, and transport links are going to be even greater once the Elizabeth Line arrives. The Metalworks is part of a £450 million regeneration programme in Slough, which is attempting to alter the town’s reputation from the one portrayed in BBC sitcom The Office and John Betjeman’s poem to something more complimentary.

As well as The Metalworks, SevenCapital is also behind the recently completed development New Eton House, on Bath Road in Slough, which has now been completely sold out.

For more information on SevenCapital and to enquire about current developments, you can visit www.sevencapital.com or call 0121 296 1548.

The buoyancy in Central London’s ultra-prime residential property market continues apace with the latest mega-deal understood to be a Middle Eastern buyer who has purchased the famous Onassis residence at 47 Grosvenor Square in Mayfair, which had an asking price of £25 million.

It’s understood the deal, listed on Lonres at £18,600,000, is the highest price achieved for a single unmodernised apartment in Mayfair this year, brokered in less than a day by leading Mayfair agent Wetherell, involving the firm’s executive chairman Peter Wetherell.

The last time a property deal in Mayfair for a home priced above £10 million was agreed and implemented in less than 24 hours was over a decade ago during the era before the introduction of stamp duty on second homes and higher stamp duty for the buyers of more expensive homes (introduced in 2016 and 2014 respectively). 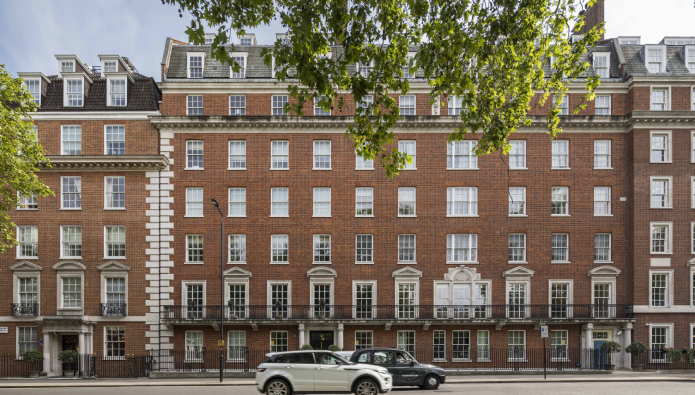 During the 1960s and 1970s, the Onassis residence was used as a London pied-a-terre by Artemis Onassis, the sister of Aristotle Onassis, Christina Onassis, Artemis’s niece, Jackie Kennedy Onassis and Princess Lee Radziwill (Jackie’s sister).

The interest in the property has been boosted by its glamorous history and also the potential to restore the property to its former glory. Once restored, it could be worth up to £30 million.

The ambassadorial first-floor apartment at 47 Grosvenor Square offers more than 5,000 sq ft of lateral living space, with a 60-plus foot balcony and south-facing terrace.

It was once the London home of Artemis Onassis, sister of billionaire Aristotle, and this deal is the first time in over 28 years that the historic Greek billionaire family’s Mayfair property has been brought to market and sold.

The palatial neo-Georgian apartment building was constructed in 1938-1939. The apartment’s first owner, from 1946, was Sir John Anderson, 1st Viscount Waverley (1882-1958), who was chairman of the Royal Opera House and patron of legendary opera singer Maria Callas (1923-1977).

Guests at the apartment included Christina Onassis, who owned a home in nearby Reeves Mews, while other visitors included Jackie Kennedy Onassis, Princess Lee Radziwill and Jackie’s daughter Caroline Kennedy.

When approached, Wetherell declined to comment on the buyer or provide details of the deal. However, when asked about the deal being listed on Lonres, Peter Wetherell said the following.

“The landmark sale of the ambassadorial 5,000 sq ft Onassis residence at 47 Grosvenor Square, in a £18.6 million deal done in under 24 hours, shows the continuing appeal by global wealth for trophy London properties. Ultra-high-net-worth buyers from around the world are currently wanting to acquire trophy properties of this type in Mayfair which will soon be in short supply."

"This is due to Westminster City Council’s new planning brief, which will prohibit the building of new homes of over £2,155 sq ft (200 square metres). These planning changes mean that the pipeline supply of these type of large ambassadorial residences will diminish over time.” 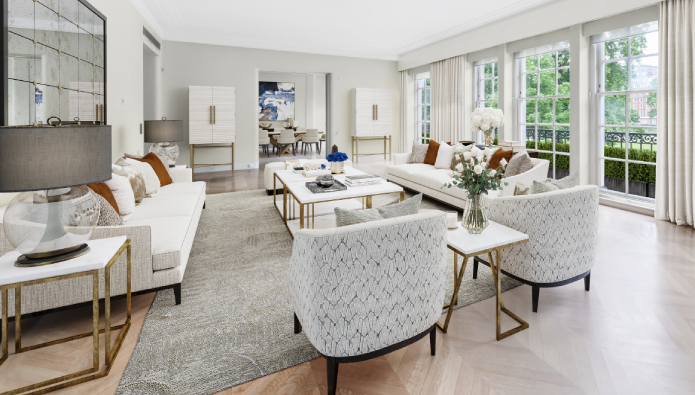 He added: “Beauchamp Estates and Wetherell were both fielding buyers and offers for this Mayfair residence, with an offer via Peter Wetherell being accepted. The deal is cloaked in secrecy but we understand that the apartment has sold to a Middle East buyer, a Saudi billionaire buying for his daughter."

"It is interesting that since Covid-19 all the ultra-prime deals have either been for houses or for full-floor apartments like this one, or penthouses where buyers can carefully control access and don’t have to share access to their homes with neighbours.”

Who was Aristotle Socrates Onassis?

His name sounds like something from Greek mythology, but Aristotle Onassis was a Greek shipping magnate who was one of the most famous tycoons of the 20th century.

He amassed the world’s largest privately-owned shipping fleet and was one of the world's richest and best-known men. He famously had an affair with opera singer Maria Callas and later married Jackie Kennedy, the widow of assassinated American President John F. Kennedy, in 1968. 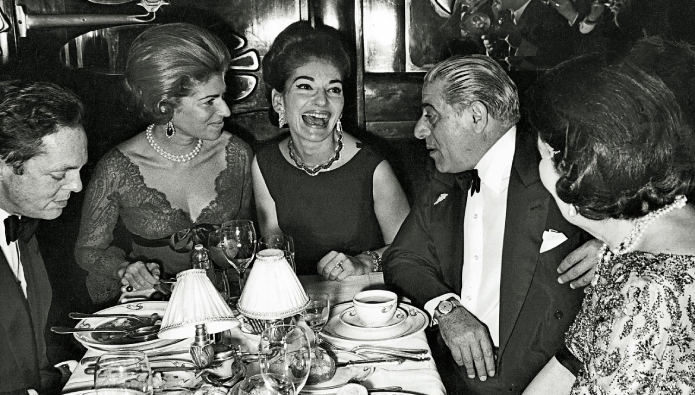 Onassis was born in Smyrna (then part of the Ottoman Empire, now modern-day İzmir in Turkey) in January 1906, but fled the city with his family to Greece in 1922 in the wake of the Greco-Turkish War.

A year later, he moved to Argentina and established himself as a tobacco trader and later a shipping owner during the Second World War. After moving to Monaco, Onassis fought Prince Rainier III for economic control of the country through his ownership of SBM and its Monte Carlo Casino. In 1957, Onassis became involved in the airlines business and established Olympic Airways, the first Greek air company.