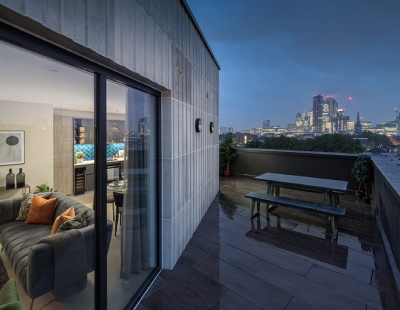 A niche, but much-discussed, sub-sector of the rental market, co-living has never really taken off in the UK in the way it might have been expected to.

While it shares many similarities with Build to Rent and purpose-built student accommodation (PBSA), with its millennial target base, shared facilities and community events, it hasn’t experienced the explosive growth of those sectors in recent years.

The most famous example of a co-living brand is The Collective, which has schemes in Old Oak Common (the UK’s first co-living building) and Canary Wharf. But it has faced criticism over the size of its rooms and their affordability. (A small one-bed en-suite at The Collective Old Oak, for example, would cost more than £1,080 a month, based on a 12 month contract, while it would be nearly £1,300 pcm for those on a short stay of four months).

Equally, the main selling points of co-living – a greater sense of community, communal areas, high levels of social interaction, etc. – are surely compromised by Covid-19 and the new normal of social distancing and stricter hygiene protocols we must all adhere to?

Some, though, argue the opposite – that the coronavirus outbreak has actually led to a rise in interest in co-living spaces, with many people who live alone finding that they’ve felt increasingly lonely during the lockdown period.

Co-living enables people to have their own apartment, but enjoy hanging out with others in the communal spaces, which could appeal to those seeking companionship – particularly in larger cities where social isolation and loneliness tends to be far more commonplace.

What’s more, landlords have felt the strain financially as they’ve lost thousands of pounds every month with tenants struggling to pay rent due to coronavirus, which could open the door to corporate investors playing a far greater role in the private rented sector.

Vonder Europe, one of the continent’s leading co-living providers, certainly believes this model of renting is the future, and recently announced that it is launching the next stage in luxury co-living with its sixth London location in Shoreditch.

Vonder aims to make life easier for landlords by operating on a master lease, taking on all operational and marketing costs, as well as full property management. This includes dealing with payments arrears, voids and facility maintenance. 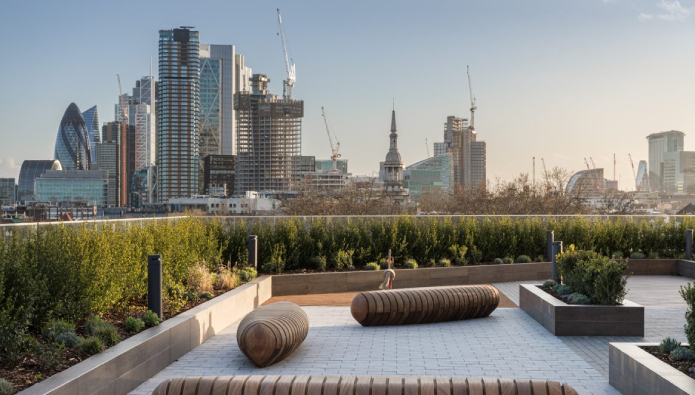 The firm also insists it has a proven track record of acquiring high-quality tenants, subsequently increasing the value of the property, while the covenant provided by Vonder aims to guarantee long-term relations and stable returns.

The new scheme in Shoreditch provides 62 newly refurbished apartments. Unlike other co-living spaces, each apartment (one to three bedrooms) comes fully furnished and has its own private lounge, kitchen and dining area, as well as a bathroom.

Additionally, members will have access to exclusive communal spaces including a rooftop terrace, private 16-seater cinema, fitness studio and a co-working lounge, as well as regular events and activities. It is far from cheap, though, with prices starting at £2,300 per month for a one-bed. The apartments have been available to rent from July 1.

The interiors have been carefully curated with high-quality furniture and ‘bold pops of colour’ to create ‘a charming Scandinavian feel of modern luxury’.

Vonder Shoreditch says it is all about the service, too, providing a 24/7 concierge and on-call community managers to offer support and assistance with any requests. The upcoming launch of the Vonder App will also provide a direct platform for communication between tenants and community managers, as well as with other ‘Vonderers’.

In line with other Vonder locations, Vonder Shoreditch will host regular events, including fitness classes, yoga sessions, boxing workouts, art exhibitions, networking events, language classes and inspirational talks. These events, the firm says, create opportunities ‘to connect, experience and embark on urban adventures with fellow Vonder Shoreditch residents and Vonderers from around the world’, helping to build a global network and community of like-minded individuals. 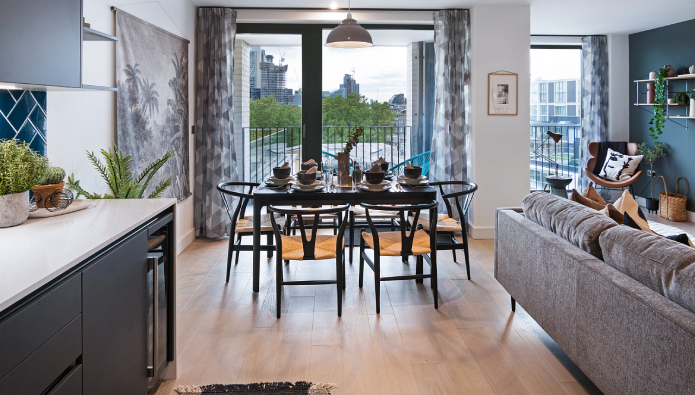 Tomer Bercoviz, chief executive of Vonder Europe, commented: “By definition, Vonder is not a traditional co-living brand - we do not offer shared facilities such as kitchens, bathrooms or living rooms. Our apartments and living spaces are totally independent. For us, the ‘co’ in co-living’ refers to community, content, experience and the ability to connect people. Vonder is a new way of life”.

He added: “Co-living was already moving from ‘a trend’ to an established way of life in 2020 – but in the wake of corona we’ve seen interest surge. The social isolation of lockdown has reminded people that connection and community are the cornerstones of a healthy and happy life and they’re making the move from renting alone to co-living to find this.”

“Home is now the place you spend the majority of your time, bringing home and work closer together than ever before. Our apartments come with comfort, community and amenities built in, making them perfect for modern hassle-free living - co-living and co-working while staying connected.”

Isaac Chamberlain, a professional British boxer and Vonder Europe member, said: "In what could have been an incredibly isolating period, I've actually never felt more connected. The community we’ve built in London over the year has been an incredible support. It’s been exciting to move to Vonder Shoreditch and getting to be a part of the already growing community here.”

He added: “It’s been fantastic to see everyone helping out and offering up their talents or knowledge to keep everyone entertained and interacting - I've been teaching a boxing and fitness class over Instagram to Vonderers all over the world and have even done a cooking class taught by Claudia Urta, a fellow resident in Warsaw.”

Chamberlain said the all-inclusive style of living works perfectly for him, giving him the headspace he needs to focus 24/7 on his craft. “And the rooftop terrace in Vonder Shoreditch is a pretty cool bonus,” he continued. “After I have finished exploring the London locations, I’m hoping I will get to experience some of the other Vonder locations and communities in Europe; once I can get back to travelling around the world.”

Situated within walking distance of Shoreditch High Street and Liverpool Street, the property sits in the heart of London’s most creative borough, moments from the Silicon Roundabout, London’s main tech hub.

The area offers a wide range of bars and restaurants, as well as being surrounded by street art and vintage boutiques ‘bustling with a uniquely creative vibe, founded on artistic innovation and cultural diversity’.

As well as building a community within and between properties, Vonder Europe says it is committed to integrating with local communities at each location, working closely with local businesses, services, cultural centres, upcoming artists, artisans, musicians and creatives to bring them into the Vonder family.

The company says it was also proud to help support NHS and frontline workers during lockdown, donating apartments to staff from Willington Hospital Trust and Frances Taylor Foundation, a local care home.

Due to Covid-19, Vonder Europe says all of its developments are currently operating with increased hygiene measures to ensure the safety and health of both tenants and staff.

Prices start at £2,300 for a one-bedroom apartment, £3,300 for a two-bedroom and up to £4,000 for a three-bedroom apartment, with flexible contracts from three months to two years on offer. Of course, with figures like this at play, it is very much targeted at the affluent end of the market – which will do little to dissuade the notion that co-living is for rich kids only.

Supporters, however, would point to the all-inclusive nature of the apartment and the various add-ons and benefits it provides.

In recent times, there have been small signs that co-living might be starting to emerge into the sort of trend that could rival Build to Rent and PBSA.

The firm secured two prime sites in Walthamstow, East London and Deansgate, Manchester, which are set to deliver 366 co-living units over the next two years. It also revealed two more secured sites in prime London commuter belt locations and another in Liverpool. Overall, the five sites are set to deliver 1,786 units at a Gross Development Value (GDV) of £355 million.

Similarly, The Collective has recently had sites greenlighted in Borough High Street and Stratford, while last year it announced plans – backed by DTZ Investors – to raise up to £650 million for a co-living fund, which would hold a portfolio of around six to 10 assets. Over the next decade, it aims to attract £1 billion of investment.

Meanwhile, just last week we reported on possible new growth for the co-living sector with The Studios24 – which delivered the first major co-living development in the Midlands – securing funding of £6.4 million from Cynergy Bank.

This guest piece from Steven Hiltermann, UK general manager at rental platform Badi, also outlined why co-living might be the future of urban living.

At present, though, it remains a highly niche market. Last year, JLL’s European Coliving Index revealed that there were over 23,150 co-living beds either built or in development across Europe – just a tiny fraction of the Build to Rent and PBSA markets, which in themselves are still fairly niche.

That said, the report also found that London accounted for over 20% of Europe’s overall co-living stock, and said that the UK is a particularly strong growth market, with Manchester, Glasgow and Birmingham also ranking in the top 20 co-living cities in Europe.

Maybe Covid-19 will lead to increased demand for co-living developments to stave off loneliness. Equally, it could prove to be a very big barrier to future growth.

Introducing Capella – a last chance to buy in King’s Cross ...

Roundup – MMC homes for rent and a new 28-storey resi tower in Birmingham ...

The Urban Splash Residential Fund (USR) has announced a £25.8 million...

How PBSA providers can foster a sense of community post-lockdown ...