Several months ago, on March 23, Boris Johnson made a televised address to the nation with the unprecedented call for the UK to stay at home. More than 100 days later, restrictions are beginning to ease and normal life is returning in some shape or form – albeit in a very different way from before.

And, as the local lockdown in Leicester has shown, the road to normality is likely to be a long and winding one.

With the risk of contracting Covid-19 still at the forefront of many people’s minds, including students, it might have been expected that self-contained studio units would have increased in popularity in recent months.

The latest enquiry data from StuRents, however, suggests this trend has not played out as anticipated.

The distribution of enquiries by bed size, between March and June 2020, has been largely in line with last year. The size of home with the largest proportion of enquiries, for example, was four beds, taking 18% of the total, albeit this was down from 21% recorded in the previous year.

Together, clusters and houses in multiple occupation (HMOs) containing three beds or more captured some 58% of enquiries made in the four-month period outlined above. By contrast, studios and one-beds equated to only 24% of enquiries made, down 1% from the 25% recorded in the equivalent period of 2019. 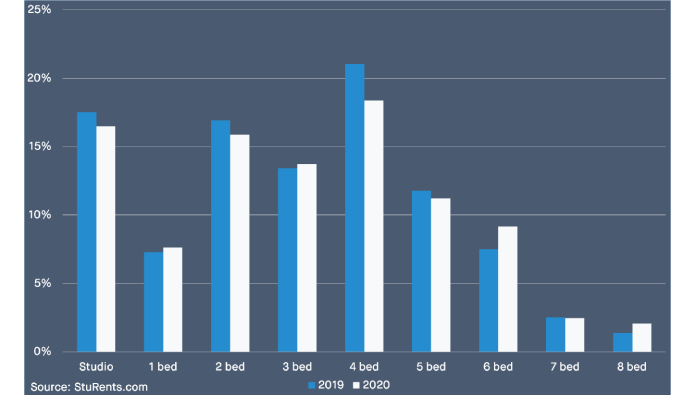 The data, therefore, seems to dispel the hypothesis that students are moving away from shared houses to something more self-contained, to ward off the threat of coronavirus.

With social distancing measures restricting movements and interactions between households, StuRents suggests that perhaps the appeal of living in an isolated bubble of friends means larger sizes remain an attractive proposition.

Additionally, for most students, affordability is still a key consideration and one that may make studios an unviable option due to the higher price that they command. Nationally, outside of London, the average studio room in purpose-built student accommodation (PBSA) carries a per person per week rental premium of 77% compared to the average HMO.

Although year-on-year demand for larger clusters has been unexpectedly buoyant, it also needs to be considered within the wider seasonality of the market, StuRents says.

This is especially the case for those operators of PBSA that may be looking to target a greater ratio of domestic students, due to the risks associated with dwindling international numbers.

The StuRents data for the last full lettings cycle (October-September) highlights the distribution of all enquiries for clusters and HMOs consisting of three beds, with the figures indicating that by the end of March around 75% of enquiries for this size had already occurred. By the end of June, this figure increased to 85%.

With this in mind, those PBSA operators seeking to lure students away from HMOs need to be aware that the demand pool will have diminished considerably by March.

It’s also true that the national trend disguises substantial local variations. Durham is the most extreme example of this, with 90% of enquiries for three beds or more having been made by the end of March.

StuRents advises that localised data such as market seasonality and average pricing for HMOs and PBSA can be used as part of a marketer’s decision-making process, and in times of uncertainty, this could help provide an edge that allows an operator to be more cost-efficient.

In separate student news, and as if to highlight the truly international nature of the growing PBSA market, London-based specialist student housing investor Amro Real Estate Partners has completed the sale of its student residence in Granada, Spain, to Xior Student Housing NV, the Belgian real estate investment trust, for a total of €37 million.

The asset, which is located on the University of Granada’s Cartuja campus and a five-minute walk from the city centre, was purchased by Amro as a development site in 2018 and comprises a recently completed 354-bed student accommodation scheme.

Student lets – ambitious tie-up and most expensive areas for tenants ...

StuRents, one of the UK’s largest student accommodation search platforms, is...