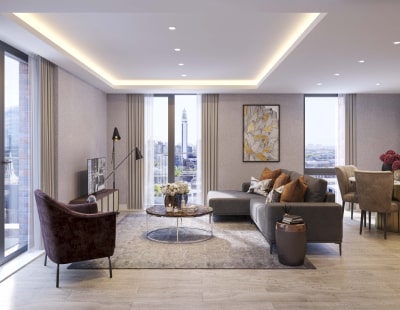 Next week (Monday 3 August 2020) developer St Joseph will launch its 21-storey The Regent building to market as it pushes forward with its Snow Hill Wharf neighbourhood in Birmingham’s historic Gun Quarter, signalling the company’s confidence in the UK’s Second City.

The landmark residential building, St Joseph’s first development in Birmingham, will feature 108 of the 420 homes on offer at Snow Hill Wharf. At 21-storeys high and standing at more than 182m above sea level, it will break the record for the tallest ever residential apartments to be sold in Birmingham’s Gun Quarter.

According to recent findings from Rightmove, demand for homes within Birmingham’s Gun Quarter and wider B4 postcode has led to sold prices increasing by 23% on the previous year.

Meanwhile, in its Birmingham Report released in March, global property consultancy Knight Frank highlighted the demand for homes in the city. It forecasted that residential property prices in Birmingham, and the wider West Midlands, will grow by 13% over the next five years, while the firm also predicted that rental prices will increase by 10% in the same period.

Ashley Kensington, managing director at St Joseph, said: “We believe in the long-term resilience and growth of Birmingham, including its property market. This was one of the main reasons why we committed to regenerating parts of the city, creating new homes for communities to thrive.”

She added: “Snow Hill Wharf has been met by high demand, with buyers recognising Berkeley Group’s quality and sharing our vision for Birmingham. The future for the city is bright. Major infrastructure projects are underway and global businesses are relocating their offices here, such as BT and HSBC, which is encouraging more professionals and those living internationally to come to Birmingham.”

“This market launch sees St Joseph finally reveal The Regent. As the jewel in Snow Hill Wharf’s crown, it features a mix of one and two-bedroom apartments, offering panoramic views of Birmingham’s evolving skyline.” 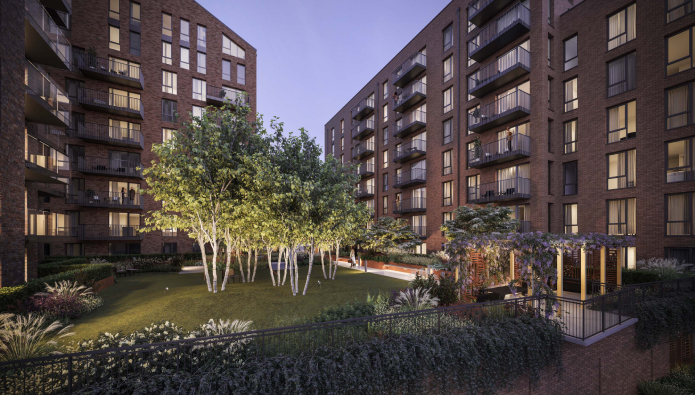 The Regent will feature two penthouses, with the two-storey rooftop apartments – scheduled to launch to market later this year – being amongst the most luxurious ever sold in Birmingham’s city centre.

St Joseph has also brought forward the 84 remaining homes at Snow Hill Wharf to market, following strong buyer demand. Over half of the apartments at the canal-side neighbourhood have been purchased ahead of first completions in Q1 2021.

What’s more, over 40% of the 1.87-acre neighbourhood is outdoor space, which should appeal in the post-Covid world where this has become such a priority. The development will also include three podium gardens overlooking the Birmingham and Fazeley Canal.

Given the coronavirus crisis, the development’s market launch will be led digitally, with St Joseph rolling out a virtual system that enables potential buyers to tour the neighbourhood. The interactive technology allows users to experience the apartments, gardens and communal areas in 360 degrees, alongside the different views from all 420 homes. To find out more, visit: www.snowhillwharf.co.uk.

Ahead of the launch, Property Investor Today was invited to attend a virtual tour – held via Zoom – with Lucy Darby, sales manager at Berkeley Group St Joseph.

Darby, from the West Midlands herself, spoke passionately about the lifestyle offering on offer in Birmingham, which she describes as the best of any regional city.

“Everything is on your doorstep,” she explained, as we looked at a map showing Snow Hill Wharf’s proximity to Birmingham’s business district, a number of major stations, the Jewellery Quarter, and the landmark Bullring shopping centre. It’s also surrounded by various higher education establishments and the Birmingham Museum & Art Gallery.

“Birmingham has the most Michelin-starred restaurants outside of London. And you can actually get a table. In budget. And walk home afterwards,” Darby continued.

The heart of the city centre is a 12-15 minute walk away, while Birmingham Snow Hill station is around six minutes by foot. From there, you can get to London Marylebone in a couple of hours.

Meanwhile, from nearby Birmingham New Street – the city’s main transport hub – you can reach London Euston in only 1 hour 20 minutes. And that’s even before HS2, which will cut journey times to the capital to just 45 minutes, while Manchester, Sheffield and Leeds will all be accessible in under 50 minutes.

Luckily, it’s also the case that Birmingham is well on its way to rivalling the capital in terms of its allure to businesses. A number of major companies and organisations – including PwC and HSBC – have relocated their HQs to the city in recent years.

It has become a popular place to relocate to, especially for those escaping London. As people move out of the capital in greater numbers, smaller cities such as Birmingham are reaping the rewards, boosted further by the rising number of jobs on offer.

This is backed up by the numbers. Between 2002 and 2015, Birmingham’s population increased by around 162%, and is expected to grow by a further 17% over the next nine years. It’s currently at around the 1.3 million mark, making it comfortably the UK’s second biggest city in terms of population.

“Before, not many people lived in the city centre,” Darby told us. “It was mainly students. But that is now changing. People want the lifestyle offering. Things on your doorstep. Something central. Birmingham is a great size and offers that sense of community maybe missing in other big cities.”

Birmingham’s new business district, Paradise Circus, was a huge construction project that shot up fast, HS2 is on the horizon, tram improvements are ongoing and the Commonwealth Games are set to be held in Birmingham in the summer of 2022 – all of which seems to suggest a newly confident city that is on the up.

Part of the Big City Plan

The Gun Quarter – once one of the world’s busiest manufacturers of guns – doesn’t have many residential developments at present. But it’s hoped the area will have as much of a renaissance as the nearby, uber-trendy Jewellery Quarter, which has reinvented itself far away from its original purpose.

Understandably, St Joseph doesn’t wish to focus too much on the heritage of the Gun Quarter – given the negative connotations of the weapons that used to be made there – but it is keen to give a nod to the area’s history of industry, craftmanship and manufacturing.

The Gun Quarter is a major part of Birmingham’s Big City Plan, a 20-year masterplan designed to foster and support Birmingham’s continuing transformation into a world class city. It covers every aspect of the built environment, including creating 1.5 million square metres of new floorspace, 50,000 new jobs, 65,000 square metres of new and improved public spaces, 28 kilometres of enhanced walking and cycling routes, and over 5,000 new homes with new leisure and recreational facilities to attract more families.

Berkeley Homes says it has buildings and placemaking at its heart, and is aiming to play its part in the transformation of Birmingham with the Snow Hill Wharf scheme.

During our virtual tour, Darby points out the various standout elements of the scheme – the prioritisation of green space, the podium gardens linking the five buildings in the development, the views on offer to residents. The scheme sits right beside the Birmingham & Fazeley canal and opposite a cathedral, with the apartments having a view of the gardens and canal in one direction or the city centre in the other.

Darby explains that the completion dates for the scheme are staggered, with the first building opening in Q1 next year, while the Lancaster building will follow in Q2 of 2021. Phase two includes the Fazeley and Colmore buildings, due in Q3 2021 and Q1/Q2 of 2022, respectively.

The final part of the scheme, The Regent, will be marketed in the UK and overseas from August and is set to complete in 2022. The scheme as a whole first broke ground in August 2018. A marketing suite is coming soon to boost the sales of the remaining apartments on offer.

Darby says that around 85% of the apartments will have a private balcony, while facilities will be on offer in the Fazeley building. There are contingency plans in place to adapt any of the spaces – the cinema room, the gym, the business lounge, etc – to adhere to social distancing.

While most of the appointments during lockdown were interactive, physical appointments are starting to come back – albeit with new protocols in place – as people are keen to see things in the flesh again. 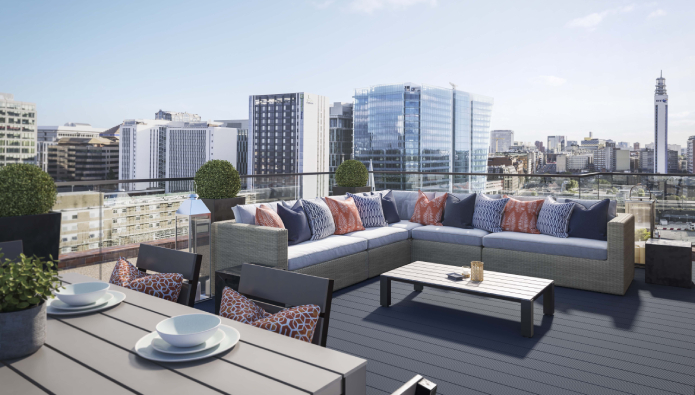 But Darby says things have largely worked well, even without physical interaction, thanks to the wonders of modern tech. “With the virtual viewings, it sounds a bit silly, but we’ve blown away by how good technology is. Face-to-face meetings were not possible for a long time, so it was a good alternative.”

She adds: “The CGIs and video quality we can provide means people are happy with virtual tours.”

The experience is certainly immersive and seamless, and you do get a real sense of the environment as you move through it. However, it does struggle to replicate how it would be physically, for obvious reasons, and something is lost as a result of that.

On the other hand, it’s much easier to focus on what the agent is saying, and questions can be asked throughout – so there are definite upsides, too.

Darby believes that now is only the start of Birmingham’s boom, and there is a real buzz throughout the city. St Joseph intends to remain in the West Midlands, and in particular Birmingham, with another scheme at Glasswater Locks set to launch next year, close to Aston University and the planned HS2 Birmingham Curzon Street station.

In Snow Hill Wharf, its one, two and three-bedroom apartments are available for between £227,500 and £460,000, while prices are yet to be released for the upcoming Glasswater Locks scheme.

“There is much more capacity to grow,” Darby concludes.

Berkeley’s newest brand, created to bring the firm’s passion for quality, placemaking and building communities to Birmingham and the West Midlands, the St Joseph name was inspired by the transformational civic improvements delivered by Birmingham's 19th century mayor, Joseph Chamberlain.

Like all of the Berkeley Group’s brands, it operates independently from the overall organisation. It follows the ethos, espoused by Joseph Chamberlain himself, that ‘inspiring public realm is the cornerstone of a happy, thriving community’. It says it is committed to delivering the best for local people, a principle which will lie at the heart of everything it does.