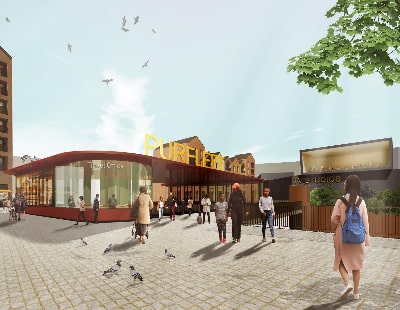 New images have been released to highlight how the £1 billion regeneration of Purfleet-on-Thames will transform the Essex town’s town centre and riverfront, with upgraded transport links sitting alongside new homes, social infrastructure and a one million sq ft creative complex.

Purfleet Centre Regeneration Limited (PCRL), which is a joint venture between mixed-use developer Urban Catalyst and Swan Housing Association, is steering the regeneration of Purfleet-on-Thames town centre in collaboration with Thurrock Council.

The recently released illustrations have been created by award-winning architects AHMM, who are working on the overall masterplan (along with drMM) that was originally put together by KSS and aLL Design.

The new images show ‘indicative plans’ for the new train station, set to be overhauled as part of the regeneration, as well as the entrances to the new one million sq ft media village, which will include TV studios where live shows can be filmed in front of a public audience.

The images also show how some of the thousands of homes that will be built will look once complete.

Once finished, the £1 billion regeneration is set to deliver a new town centre, complete with shops and restaurants. There will be up to 2,850 new homes provided, too, alongside an integrated medical centre, improved transport infrastructure and a new primary school. 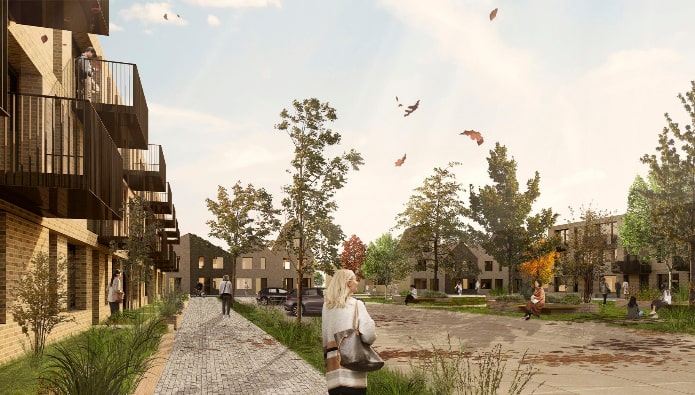 The plans, which were approved in April last year, also include the ‘media village’ to support the UK’s ‘booming TV and film industry’. The proposals form part of the plans for Purfleet-on-Thames’ journey to becoming a leading creative hub, with the town already home to High House Production Park and the Royal Opera House production workshop.

Later phases could include the delivery of a new Higher Education/Further Education campus, which would create a ‘ground-breaking’ education facility with a focus on key sectors, such as the creative arts and health or logistics.

In April, the government announced it was pledging £75 million to support the redevelopment as part of the Housing Infrastructure Fund. The funding will be used to provide vital infrastructure and plans could include replacing the level crossing with a bridge over the railway, as well as a new health centre, a river wall, drainage improvements and other important utility infrastructure.

In January, the green light was given to the regeneration’s first phase, consisting of 61 new high-quality family homes, a children’s play area, and an orchard walk. This phase is set to reinstate public access to Hollow Woods and will form part of the 2.36-hectare development which has been designed to enhance the green links to Purfleet’s Conservation Area. Preliminary works are anticipated to start on site later in 2020.

Urban Catalyst, the mixed-use developer behind the scheme, specialises in social infrastructure and complex mixed-use urban regeneration projects. Set up by industry veteran Ken Dytor, the firm has been behind a string of successful projects, including the Bermondsey Square development in London, which delivered new retail, hotel and offices alongside performing arts space and an art house cinema.

Swan Housing Association, meanwhile, is one of the largest housing providers in Essex and East London, with over 11,000 homes under management and a further 8,500 homes in the pipeline, including the 2,850 planned for Purfleet-on-Thames.

“These latest images show the scale of our ambition for Purfleet-on-Thames, from transforming the riverfront to upgrading the train station and delivering thousands of homes,” Sir Tim Laurence, chairman of PCRL, said.

“This is on top of a new school and integrated medical centre for local residents as well as a media village that will see the town emerge as a leading creative hub capable of supporting Britain’s booming film and TV industry.”

One of London’s most neglected areas could soon see a high-quality...

Investors - leading the charge of sustainability in property development ...

As a once in a lifetime event, the response to the...