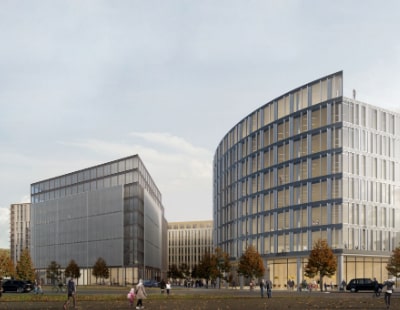 This will help to deliver the first phase of the substantial mixed-use project, in partnership with developer Urbo and Sheffield City Council, as the firm continues to invest for the long-term in an effort to support the UK’s post-crisis economic growth prospects, jobs and housing needs.

The development will be made up of 200,000 sq ft of Grade A office space, 350 BTR homes, a multi-storey car park and high-quality landscaped public spaces. The first phase is set to deliver large footprint, modern office space, something which is currently lacking within Sheffield’s property market, and is expected to house up to 1,800 workers.

Legal & General has partnered with Sheffield City Council and Urbo (West Bar) Ltd – a joint venture between Urbo Regeneration and Peveril Securities (the development arm of the Bowmer and Kirkland Group) – to bring forward the scheme.

The company, which has one of the biggest stakes in the fast-growing BTR sector, has previously invested billions of pounds into urban regeneration projects across the UK, including partnerships with local authorities in Cardiff, Salford, Newcastle and Sunderland.

Legal & General also says it has worked with central government bodies such as Homes England and world-leading universities to improve and ‘reshape the urban landscape’, using its varied capital streams - from start-up funding to long-term UK pension money – to provide the significant investment needed to help cities adapt, change and innovate.

Legal & General insists it is committed to investing in Sheffield, recognising the high potential the city has to offer, and helping to support its post-crisis growth ambitions, as well as meeting its need for regeneration, housing and job creation.

“There has never been a more important time to invest in our regional cities. Legal & General is in a unique position to support the UK economic recovery by recycling hard-earned savings and pensions into real assets which promote job creation - through construction to office occupation - and create landmark master plans which incorporate grade A office space, a variety of housing and high-quality public space,” Nigel Wilson, chief executive of Legal & General, said.

“Our investment partnerships in cities such as Cardiff and Newcastle are already delivering at pace,” he added. “Likewise, our vision for West Bar Square is to deliver a much-needed new quarter for the centre of Sheffield. During these unprecedented times, it is absolutely imperative that institutions continue to push forward with deals, so we can position the UK for an accelerated recovery and lay the groundwork to support those most in need in society.”

Peter Swallow, the managing director of Urbo Regeneration, said the investment is ‘massively significant’ for Sheffield, as well as being a vote of confidence in the future of the city as a whole, particularly during the current climate.

“The funding partnership we have agreed with Legal & General will guarantee delivery of large-scale regeneration in this important part of the city, linking the rapidly expanding Kelham Island district to the city centre,” he said.

Councillor Mazher Iqbal, Sheffield City Council cabinet member for business and investment, also commented: “Although I recognise it may not be at the forefront of everyone’s minds in these difficult and challenging times, it is really important that we don't forget to invest in the future of our city and continue to support developments for when Sheffield emerges from the Covid-19 pandemic."

He said the Legal & General injection is ‘fantastic news for the city going forward’ and ‘yet another example of how the city is attracting major new investment partners’.

“This development will create modern floorspace for thousands of jobs; hundreds of high-quality new homes and improve neighbourhoods right in the heart of Sheffield,” Iqbal added. “It will also provide attractive public spaces with sustainable urban drainage and better connectivity between the city centre and Kelham. It’s a huge project and Sheffield can’t wait for it to get started.”

Urbo has been collaborating with Sheffield City Council for a number of years to bring forward the West Bar Square scheme, which enjoys a prominent position on the Inner Ring Road between the ‘booming’ Kelham Island district and Sheffield’s Cathedral Quarter.

West Bar Square was granted outline planning consent in 2017 and, last year, there was the confirmation of a Compulsory Purchase Order to complete assembly of the site. Detailed designs by architect 5plus will support the reserved matters planning applications for the first phases of development, set to be submitted in the summer.

The creation of West Bar Square is set to accompany the neighbouring Riverside Business District, which already boasts key office occupiers including the Home Office, top 50 law firm Irwin Mitchell and the Crown and Family Courts.

This new scheme is set to see £90 million invested into the local economy, creating more than 70 construction jobs every year over its six-year build period, and 32 permanent jobs once complete.

The Caddington site acquisition brings Inspired Villages' development pipeline to 2,500 homes across the UK in the next six years, with these schemes together creating around 1,000 construction jobs per annum, and up to 640 permanent jobs once the retirement communities are complete and operational.