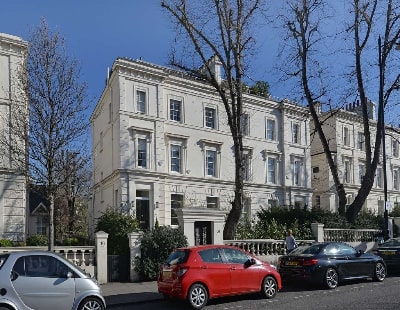 A luxury home adjacent to the iconic Underground stop that inspired one of Welsh singer Duffy’s biggest hits is set to go under the hammer for £3.25 million.

The Grade II-listed maisonette on Warwick Avenue, Central London, boasts six bedrooms and a roof terrace. Its location provided Duffy with the title to the break-up ballad which reached No.3 in the charts in May 2008.

In it she sings: “When I get to Warwick Avenue/I'll tell you baby that we're through/'Cause I'm leaving you for the last time baby.”

The 2,500 sq ft property – which is spread over the top three floors of a substantial stucco-fronted detached house dating from the 1860s - is being offered for auction by Landwood Property Auctions on June 3.

The home is situated in London’s picturesque Little Venice, where the Regent’s Canal and Grand Union Canal meet, and is just a few short steps from the entrance to Warwick Avenue tube station.

Home to communal gardens, it currently yields an annual rental income equivalent to £180,000.

Duffy – who came to worldwide attention in 2008 - was inspired to write the hit song when, as a 19-year-old who had recently arrived in the capital from Wales, she got off the Tube at that stop by accident.

The song featured on her breakthrough 2008 album Rockferry, which topped the charts around the globe and was the best-selling album in Britain that year. Her other smash hit, Mercy, went even better, going to number one in 12 countries and holding the status of the UK’s third best-selling single of 2008.

Despite her phenomenal success, she largely disappeared from public life in the following years until she revealed a shocking story on Instagram in February 2020 of being ‘drugged, raped and held captive’ by an attacker.

The 35-year old Grammy and triple Brits-award winner announced an indefinite hiatus from singing and acting in 2011 and is still yet to return with new music.

“It offers great investment potential with a rental return of £15,000 a month. And while its location may have inspired one of the most memorable break-up ballads of recent years, we’re expecting a lot of people to take it to their heart.”

While much of the property industry is kicking back into gear having been at a standstill as a result of the restrictions imposed to combat coronavirus, Landwood Property Auctions has remained safely and fully functioning throughout due to the unique way it operates - as a solely online business.

The standout lot at SDL Auctions’ latest national property auction is a notorious farm in Bacup which made national headlines after animals were found living in squalor. The farm is on offer to investors for the knockdown price of £50,000.

The current occupier of Trice Barn Farm, off Bacup Old Road, was served notice to leave last year but remains living there, making it impossible for viewings to take place at the farm. Regardless of this fact, SDL Auctions says potential buyers are lining up to bid on the property when it is sold later this month.

Andy Thompson, head of auctions at SDL North West, said: “The farm and its occupant have been causing problems for the owner for many years, which is why they are willing to accept a price way below its market value. This makes it an excellent investment opportunity because, from my experience, auction buyers are rarely put off by a property’s disreputable past or current problems.”

Located near to the Lancashire-Yorkshire border, towards the westerly edge of the Pennine Moors, Trice Barn Farm features a three bedroomed farmhouse, steel-framed livestock building and several miscellaneous buildings on a site of largely rough grazing land extending to approximately 80 acres.

The property is set to be sold in SDL Auctions’ national property auction, which will be live-streamed over the internet on Thursday 28 May.

Selling homes via auction this way is a tried and tested technique for the company, which raised £7.7 million for sellers during lockdown auctions in April, with its second national property auction attracting more than 680 remote bids.

The auction will take place behind closed doors from the firm’s auction studio in its head office, with managing director and auctioneer Andrew Parker taking to the rostrum while his wife, Rachael, regional property manager for the East Midlands, manages the internet bidding. Telephone bids will be managed by a remote team, who will convey them to the auction studio via Microsoft Teams.

“We made the decision to carry on running auctions in recognition of the fact that many people simply cannot afford to wait for the crisis to pass,” Parker said. “Clearly we were correct, as 115 properties were listed in our April auction and we’re already taking dozens of entries for our next national property auction.”

He added: “Sellers are realising that auction is a lifeline at the moment, offering speed, transparency and certainty, with a fall-through rate of less than 2% – something that sellers on the open market can only dream of.”

SDL Auctions’ second national property auction takes place on Thursday 28 May. Properties can also be sold online at any time. To find out more about the best method for your property, visit www.sdlauctions.co.uk or call the team on 0161 774 7333.