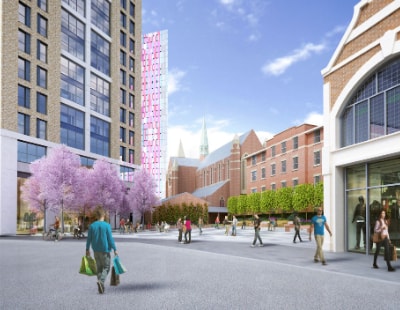 London Square Partners has sealed a deal on the St Michael’s Courtyard site in West Croydon to create a development with a public square, shops, cafes and 232 new homes – with 55% set to be designated as affordable.

St Michael’s Courtyard has a gross development value (GDV) of £90 million, which will form a major part of the West Croydon Masterplan and create a new gateway to Croydon Town Centre.

Planning is already in place for the development, designed by Assael Architecture. The residential element will feature two ‘handsome’ brick buildings of 21 and 25 storeys, while the 947 m sq of commercial space will boast retail and offices at street level and a new piazza opening up views to the listed St Michael and All Angels Church. Pedestrian links will also be created to the station and new shopping centre.

London Square Partners will work in partnership with Clarion Housing Group to deliver 128 shared ownership homes, alongside 104 apartments for private sale. The award-winning developer and housing association are already working together to create 100% affordable housing on schemes in Neasden and the second phase of a project in Staines-upon-Thames.

The West Croydon area is seen as pivotal to providing the capacity for growth plans for the area, with the transport hub playing a key role in the success of the regeneration plans for Croydon town centre.

Adam Lawrence, chief executive of London Square, comments: “We look forward to delivering a really outstanding scheme that will help to redefine the West Croydon area and the wider ambitions for the borough. The London Borough of Croydon has been very supportive of our plans.”

“Our continued partnership with Clarion Housing Group means that we are able to build 55% affordable homes, as well as for private sale. This will be a major boost for local people and those who want to move to the area. We look forward to working with Clarion on our third joint project.”

London Square – which routinely tackles complex sites across Greater London and delivers a mix of affordable homes for private sale, community facilities and commercial space – is continuing to look for new sites to expand its current land bank from £1.3 billion to £2.6 billion worth of assets, representing 4,500 homes.

London Square currently has 1,018 homes in production, forward sales of £180 million and a land pipeline of 2,356 homes representing £1.3 billion in GDV. The company obtained a new £200 million debt facility in 2018, securing the mid to long-term future of the company.