Lok Developments, part of Newcastle-based property, construction and development firm Morton Group, has completed a £17million refinancing deal for its luxury property scheme on the site of the former Sanderson Hospital in Gosforth.

On January 31 2020, Newcastle City Council approved plans to develop 37 new homes on the former hospital site in the popular residential area to the north of Newcastle city centre.

Enabling work has already commenced on site courtesy of the Morton Group’s delivery arm, Kapex Construction, and the ‘landmark development’ - designed by Sadler Brown Architects - is set to complete in autumn 2021. 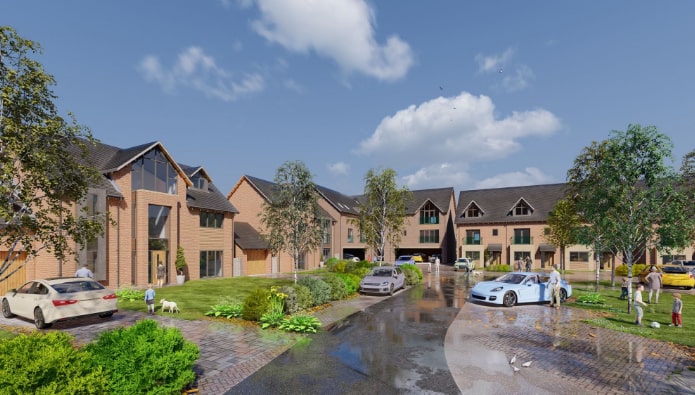 Sycamore Square, the name of the new residential scheme, will create 23 new houses and 14 apartments centred around a large green central space near Gosforth High Street. It will include a mix of four and five-bedroom detached homes, including two bungalows, four-bedroom townhouses and two-bedroom apartments, with access via North Avenue.

Designs for the development were inspired by ‘the local vernacular and the historical hospital context’. The new homes will be set around a central landscaped garden space created for residents, and will feature red brickwork, natural slate roofs and modern aluminium framed windows.

Previously, the three-acre site was home to a Victorian children’s hospital founded by Newcastle philanthropist, W J Sanderson, but has laid empty for nearly 20 years. It was purchased from the NHS by Lok Developments in June 2019 with an unconditional offer.

“This £17million refinancing deal represents a tremendous achievement by Lok Developments,” Gary Morton, group chief executive of Morton Group, said. “It has taken a monumental effort from our team and our partners and it is an extremely positive sign of what can be achieved in the midst of a global crisis.”

He added: “We are grateful for the continued faith that our finance partners have in us, and we have great confidence in the development, location and future demand in the housing market. We would like to thank all our deal partners for their continued support and we very much look forward to releasing the first phase of homes through Sanderson Young Sales Agents very soon.”

A flourishing SME housebuilder has purchased 15 acres of residential development...