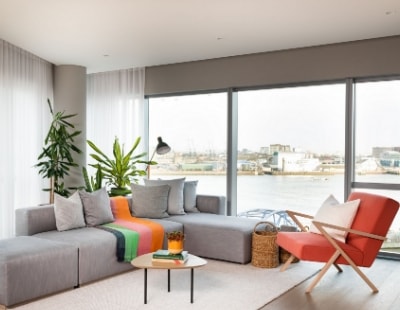 Specialist Build to Rent furnishing provider Creative BTR has announced the launch of its inaugural project, where it has delivered the interior furnishings for a new 191-unit phase at Knight Dragon’s Greenwich Peninsula.

Its appointment to one of Europe’s largest regeneration projects marks success for the newly launched company, which is the sister organisation of Lucarna Design.

Creative BTR has kitted the entirety of Knight Dragon’s No.4 Upper Riverside – a collection of 191 rental units ranging from studio to three-bed apartments.

The design approach is reflective of the Greenwich Peninsula’s signature style, consisting of minimalistic, Scandinavian influences. Bespoke furniture pieces have been sourced from various locations abroad and can be found throughout the homes.

Spanning 150 acres and wrapped in 1.6 miles of the River Thames, Greenwich Peninsula is one of the largest regeneration sites in Europe, which will ultimately deliver 15,000 new homes, 13,000 new jobs and a host of culture-led and social spaces across seven new neighbourhoods.

Creative BTR’s recent success comes right after the appointment of Charlie Olpin as managing director and Julian D’Arcy as chairman, with the latter’s 25-year career including roles within the UK government’s private rented sector taskforce and Knight Frank’s residential development and investment division, where he was a founding member.

Creative BTR aims to deliver high-quality and bespoke furniture packages at scale, with a long-term objective of becoming the Build to Rent industry’s go-to furnishings provider.

Olpin comments: “Our appointment on a project recognised on a global scale is a real statement of our intent in the marketplace. It’s one of the most exciting developments to grace the capital in decades and working with a developer of Knight Dragon’s prestige is a testament to our operations and vision for the Build-to-Rent sector.”

The Greenwich Peninsula Hotel has been acquired by hotel and investment...

Revealed: the mindset and success principles of a property investor ...

Harvey Raybould is a UK property investor and owner of the...