In this Q&A, we speak to Thomas Balashev, the 30-year-old founder and chief executive of Montague Property - a bespoke Mayfair-based international property investment firm - about breaking into the old money elite, affording young people from non-traditional backgrounds opportunites in the property industry and what the UK can learn from the US model of property business and sales.

Tell us more about your background – how did you get into property investment in the first place?

I left school at 16 and begun working at different jobs, including as a children’s football coach and a fashion shop assistant. 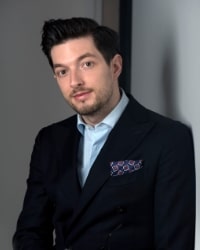 By 20, I was totally self-employed. I realised early on I wasn’t cut out to work for someone else. I always had ideas on how I could improve a business and back then the culture was different - there weren’t too many businesses that wanted to listen to a spotty teenager.

By 25, I’d had two failed businesses but tons of experience. In Portugal, I met a Parisian high-end developer; we got friendly and l listened to his stories and was just inspired.

I went to the hotel shop, bought a diary and just began writing all the things I needed to know to operate a property business. Montague Property was born. I’ve still got that diary which I keep in my drawer as a reminder that you can achieve anything you want.

How did you go from a person in their bedroom with no qualifications to launching a £100 million fund, working with some of the world’s biggest property firms and operating at the very highest levels of the property market?

It was mainly through an unwavering determination to fulfil my potential in life. I'm extremely grateful I grew up in the era of YouTube and the internet, which meant there was a huge amount of resources that I could tap into to learn about anything I wanted.

So, when I decided to grow the business my main focus was on building something that could allow me to travel, be creative and achieve all my non business-related goals. As the business organically grew, it was clear we needed to gain as much control of the process as possible.

In 2018, I travelled to Beijing to raise money for a project. I met a lot of investors that all believed in me. I realised that rather than raising capital for others, I could raise it for myself. So, like many things in my life, the idea was born, the plan followed and now I’m executing it.

Was it hard to break into what is seen as a closed, exclusive industry, where your background counts and it’s often about who you know rather than what you know?

Yes and no. Of course, it’s difficult to get to the top of any field. Yet within months of starting it was obvious to me you could get doors opened by simply asking for them to be opened; on the off chance there was some resistance, I was relentlessly persistent until that door opened.

I don’t have any fear of failure or rejection, so it doesn’t matter if it’s hard - you just keep going. Anytime I’ve been close to reaching a big goal I just move the goalposts and adjust the goal to something bigger, so I’m always in the ‘chasing’ mindset.

I had nothing to lose. If I failed and it didn’t work, no-one would have expected me to succeed anyway. But make no mistake - I’m in a result-driven business. No matter how much people like you, if you don’t deliver you’re out.

What does your internship programme involve? Who is it aimed at?

It’s not actively aimed at any one group of people, but historically university grads have mainly applied. I’ve also had a handful of over-30s with good experience in different sectors who have applied just to explore a new industry and gain a new perspective.

The main reason I launched the programme was to help me find a rough gem with potential that perhaps even they didn’t know they possessed. In return, I was prepared to give them exactly the same responsibilities as someone who had ten years in the job.

It is surprising at how capable people are of transferring skills if you let them. And whilst the goal isn’t to hire everyone who comes onboard, it is to make them better and more equipped for their chosen careers by being with us.

In return, we get great people adding value with new ideas and perspectives, especially those who may not have otherwise worked in the luxury real estate market. With any of my staff – nothing's off the table, if you have an idea it will be heard.

How can young people be afforded greater opportunities in the property world, especially those from a non-traditional background?

A lot of the talent from ‘non-traditional’ background goes into other industries such as tech or media. My belief is that the property industry needs to change, and be more open-minded about those coming into the industry.

We must acknowledge that there is so much talent outside of the traditional old boy network – all this talent needs is a helping hand to break into the industry. But, equally, these young people must feel like they are welcome into the industry.

This is also part of the reason I established my internship programme – to afford opportunity to those who may not have graduated from the top universities or gone to the best private schools. It doesn’t mean they are any less capable of doing the job.

What can the UK learn from the US model of property business and sales?

I think there a number of things we can learn from the US. The US culture is much more direct – they don’t beat around the bush. This empowers those within the industry to overcome self-doubt and limitation, thereby making them better salespeople.

Secondly, individual real estate agents in the US have a far greater presence, personal brand and entrepreneurial spirit than their counterparts in the UK. In the UK, the real estate company rules; in the US, it is the agents themselves who are given licence to build a personal reputation as the local expert.

People do business with people (especially people they like); the US model, I would argue, enables far closer personal relationships and customer interaction – an approach that we in the UK could again learn from to help drive sales.

Are people skills more than important than academic achievement in the world of property?

I would be foolish to say university or higher education is unnecessary. I truly believe education is one of the most important factors to success. I just don’t believe it has to be taught in a classroom.

Self-education requires just as much disciple and consistency as conventional schooling. But there is one skill that trumps all. ACTION. The ability to set out a goal and act on it is the single most important thing to do.

Do you still feel like a bit of an outsider in the old money world of the ‘Mayfair elite’?

Of course, because I’m not from “old money’. It’s human nature for people to like people like themselves. People in business by the most part also respect other people who perform at high levels, even if they are from different backgrounds.

Ultimately, I’m not in business to make friends. I’m a person that’s passionate about my business and I believe in working with sky-high standards. No matter where I’m from or not is irrelevant.

What are Montague’s expansion plans for 2020?

We’re hugely excited about 2020 – as well as launching a new real estate fund later in the year, we’ll be expanding our property portfolio into new markets including Miami, Los Angeles, Paris and the Middle East.

Of course, amongst all this, we’ll be continuing to provide our international HNW clients with the highest level of service available, whilst sourcing and financing some of the world’s finest properties.

High-end property broker: we should be more like the US on property ...

A Mayfair-based property broker, who has previously spoken of his ability...

Private island with seven luxury properties sells for over £5 million ...

A private island off the west coast of Ireland has been...