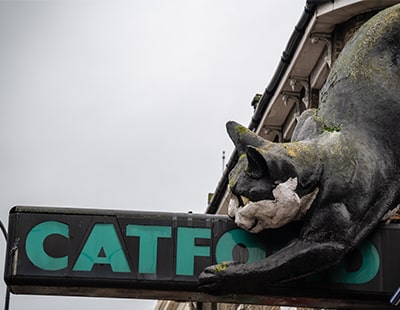 In our 10-part London regeneration series last year, there was a big focus on areas south of the river, but most of these were still very central – or a short hop from high-profile landmarks and locations.

None of these areas we covered were especially friendly for commuters, young professionals on a budget, families or buyers on middling to low incomes.

Catford, on the other hand, is often cited as one of the capital’s remaining affordable areas – a place where even those on ordinary incomes can dream about owning a London home.

Despite this, it remains a bit unloved and under the radar in comparison to the areas surrounding it. It’s not seen as hip as Peckham, as edgy as Lewisham, as leafy as Honor Oak or as sophisticated as Blackheath. It’s not quite far enough outside London to have Beckenham’s village-like charm or close enough to have the appeal to young professionals and tourists that Brixton, Bermondsey and Clapham enjoy.

A bit like Croydon, it’s seen as affordable but unfashionable. A place that remains a bit of a mystery, a place that people might simply see as somewhere to pass through rather than spend any time.

Catford is fighting back against this perception and reputation while trying to keep the affordability, character and slight sense of grit that characterises this portion of South East London. 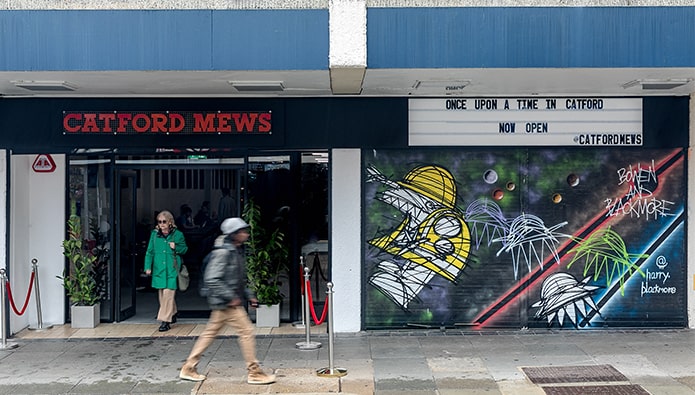 Property Investor Today was recently invited along to Catford Mews to meet the man behind the Really Local Group, explore his brainchild and see what the wider area has to offer.

The story of Catford Food Market tells us a lot about the struggles the area has faced in trying to reinvent itself. It launched in the early 2010s and, not long after, disappeared almost without a trace.

In March 2018, though, it was relaunched by Team Catford after strong input from locals about their aspirations for the town centre. Held on the last Sunday of every month, between 10am and 4pm, the market aims to ‘create real opportunities to develop and sustain new businesses’, as well as complementing the existing offerings and meeting local people’s needs.

It is home to some of South East London’s most exciting street food businesses and food producers, as well as offering live music, free craft events for children, a gift shop called Catford Cornucopia and a chance to join Team Catford’s #CatfordConversation and share views on the vision for the town centre. Around 35% of its traders are from the immediate area and offer everything from Californian-style tacos and luxury cakes to jerk chicken and Brazilian street bites. 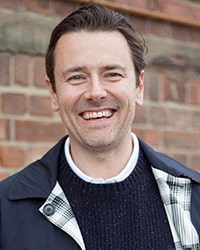 It’s this sort of thing, a community-led project firmly rooted in its local area, that Preston Benson – the American-born founder of Really Local Group – has aimed to recreate at Catford Mews, which transformed a former Poundland into the area’s newest cultural space.

For Benson, buy-in from the local community was absolutely crucial. He wanted to create a space fit for everyone, providing people with something to do on their doorstep.

“Just because you live in Zone 3 or 4, it doesn’t mean you can’t have nice things in the local area,” he said.

He wants people to embrace where they live and not feel the need to travel into central London just for something to do. Local cultural spaces are vital for that, especially in areas such as Catford which are underserved in terms of culture at present.

Surprisingly, Catford Mews is home to the first multi-screen cinema in Lewisham (three screens) for decades, showing both blockbuster movies and special interest films. Affordability is key, with tickets on offer from £5 to £8 to ensure no-one is excluded.

Benson says the cinema is the core of the project, with everything else built around it, including the food stalls and social spaces. The desire, he adds, is to turn Catford Mews into a bona fide cultural hub. 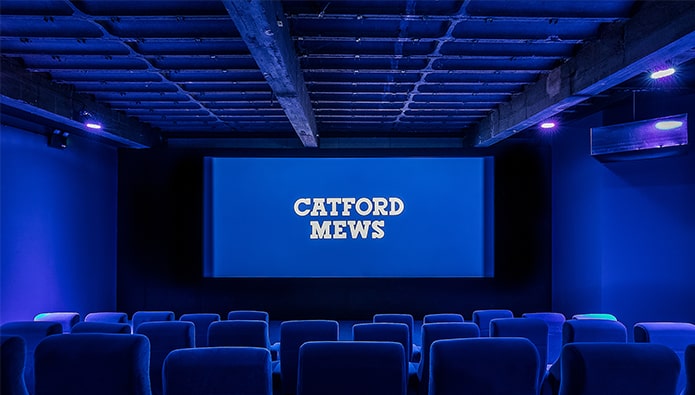 “Cinema gives people something to do and is something that can be enjoyed by all ages. People have said to me cinemas are dead, it’s all about Netflix, Netflix, Netflix these days, but we still need that human interaction, that physical space for people to visit.”

Benson moved to London in 2005 to work as an accountant in the City and soon noticed how identikit Britain’s high streets looked, with all the same ‘boring’ chains and a top-down approach where there was little consultation with the local community as to what they really needed.

He wanted to reverse this neglect of localism and turn the high street back to the people who live there. He saw a need for Catford Mews as there was a lack of facilities and cultural opportunities in the area. To put this right, he was keen to create a family-focused location with a bottom-up approach, sourcing feedback from local residents before putting his vision into action.

Local traders have been brought into man the food stalls and free WiFi encourages co-working as people use the venue as a place to grab a coffee, have a meeting or do a few hours work in a relaxed, unrushed environment.

Benson is also eager to encourage events at Catford Mews. Someone is due to have their wedding party there soon, while there's a weekly comedy club that takes place every Thursday, which has been a roaring success so far.

“This came about when a local comedian, frustrated by the lack of event space for comedy, approached us about running a weekly comedy night. It’s been one of our biggest draws ever since.”

On the day we visit, a Wednesday afternoon in late February, the venue is much busier than we expected. Several people are sitting in the unofficial co-working space on their laptops, while others are grabbing a quick coffee or a bite to eat. At the far end of the virtually T-shaped building a community event on sustainable eating is taking place, with a strong turnout in attendance.

All manner of people are here, from mothers with babies to friends having a catch-up. There is a hipster-like feel to the layout and look of the place, with the exposed pipes, the trendy, stripped-back décor and modern touches like hanging cushion lights.

Inspiration has clearly been taken from pop-up venues such as Boxpark, or the sort of cool creative spaces that are ten a penny in East London, but while those areas could be accused of being targeted at one single demographic – cool young millennials – that definitely isn’t the case with Catford Mews, which feels warm and open to everyone. It feels as much a community space as a place to bring a date or a group of mates. 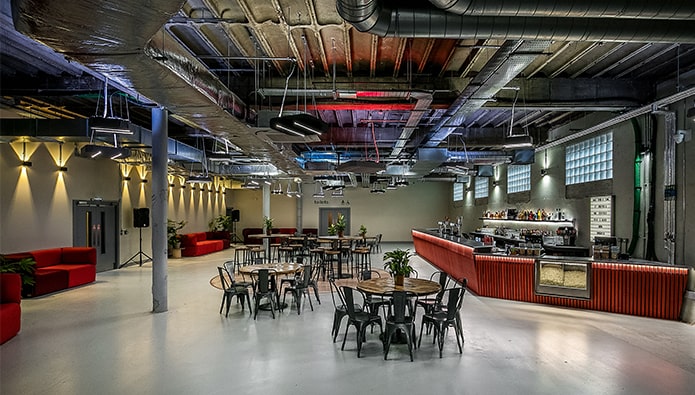 The local residents certainly seem to be on board. Feedback from the local community has been great and the venue has a 4.6 star rating out of 5 from over 200 Google reviews. A cursory glance of the #CatfordMews hashtag on Twitter also reveals lots of positive user experiences.

Lewisham, the borough Catford sits in, was recently named by Sadiq Khan as the London Borough of Culture 2021, with the bid launched at Catford Mews itself – further showing the tides of change happening here.

Really Local Group is looking to take its regeneration agenda to other locations, with two other projects in Crossrail hubs Hayes and Reading (a deliberate move, according to Preston, to tap into the potential of these up-and-coming areas), and a further scheme – announced on the day we visited – for a new entertainment venue to champion the craft and cultural heritage of Bermondsey.

There are also plans in the pipeline for new-build PRS schemes, alongside the ongoing transformation of empty buildings into cultural hubs.

Benson’s passion for regeneration and the areas Really Local Group are working in – in particular Catford – is clear and genuine. Before our interview, we witness him milling around the venue, checking in with the street food vendors and the workers at Compound Coffee. He is warm and generous with his time.

Japanese street food, a twist on traditional Jamaican patties and a vegan Scandi-inspired deli are all on offer, with the prices reasonable for the amount of food you get. Patty Man and Fuse come highly recommended from the PIT team!

Catford Mews also has partnerships with Brockley Brewery and South London-based Indigo Wine to further back up its local credentials. 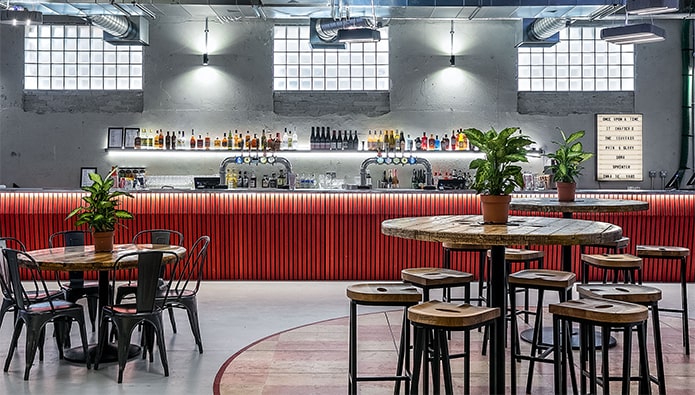 Is somewhere like Catford Mews really the future of the high street, we ask Benson. “It’s all about localism, bringing people opportunity and turning it back to the locals. There needs to be more leisure, more experiential opportunities, more culture. And no alienation of the community.”

With many shops and mid-market chain restaurants – who have expanded at a faster rate than there is demand for them – in trouble or already out of business, it’s hard to disagree that a different, more local, approach is needed.

What is the future for Catford?

Lewisham Council is investing in a masterplan framework – a vision to be developed in collaboration with the community – that aims to map out how the town will look in the 2030s.

The council has appointed Studio Egret West, along with Carl Turner Architects, Civic Engineers and Greengage, to draw up the masterplan for Catford town centre. 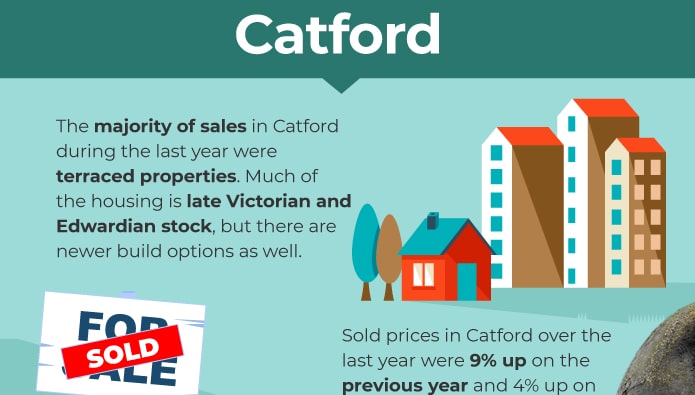 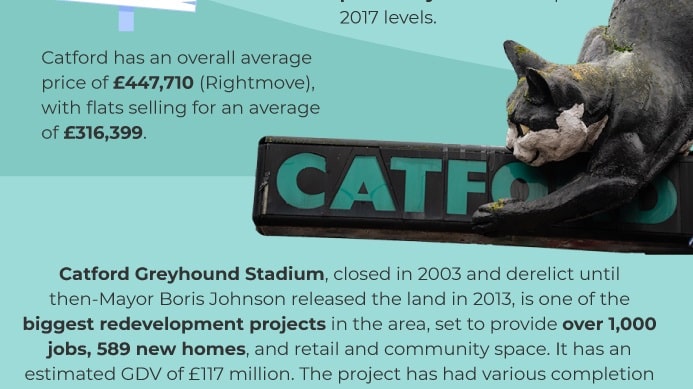 Team Catford, on behalf of Lewisham Council, is supporting the appointed architect team with engagement on the framework plan.

The opportunity area spans 11 hectares (around 15 football pitches), with the team identifying six character areas across the town centre that make up the framework plan. Various mixed-use and residential schemes are expected in the coming years to boost and reimagine the area.

The aim is to keep Catford’s character, diversity and affordability while also regenerating the area and making it fit for the 21st century. All the while seeking engagement, feedback and input from locals through Team Catford.

It’s certainly possible that where Catford goes, others will soon follow when it comes to regeneration without gentrification, and improvement without exclusion.

Q&A - should a bottom-up approach be used to revive UK high streets? ...

One of the biggest debates raging at the moment concerns the...