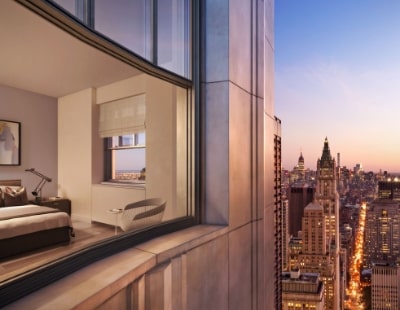 Lower Manhattan, also known as Downtown Manhattan or Downtown New York, is the southernmost part of Manhattan and the central borough for business, culture and government in the city that never sleeps.

For more than a century, Lower Manhattan was New York City, in the days when the city didn’t stretch north of Chambers Street. Now it’s a major part of an ever-expanding metropolis with 400 years of lived history, the beating heart of one of the world’s great global cities.

The historic area of the city now combines eclectic architecture, top-tier educational institutions, world-class shopping and restaurants, as well as strong transport infrastructure and 84 acres of the city’s best parks and open spaces.

Over the last decade, there has been more than $30 billion invested into downtown real estate, while new infrastructure has helped in revitalising the downtown property market and attracting creative industries and start-ups including Condeì Nast, Time Inc., HarperCollins and Spotify.

Some $6.4 billion of this sum was spent on expanding the area’s transit infrastructure, which now includes 12 subway lines, 30 bus routes, 20 ferry routes and 28 Bikeshare stations.

One of the biggest real estate developments in Downtown Manhattan is One Wall Street – the biggest office to residential conversion in the history of New York. Here, we explore what it offers investors.

The former Irving Trust Building is being transformed by Macklowe Properties into 566 homes - ranging from studios to four-bedroom apartments - and a penthouse. Prices at One Wall Street are set to start from $960,000.

Macklowe Properties, the team behind 432 Park Avenue, the tallest residential building in the Western Hemisphere, was founded in the mid-1960s by New York City real estate developer and investor Harry Macklowe, and its previous projects have included The General Motors Building, New York’s The Apple Store and 441 Ninth Street.

One Wall Street, which sits on the corner of Broadway – a theatre district only rivalled by London’s West End in terms of standing and prestige – was acquired by Macklowe in 2014 and is described as  a ‘landmark fifty-storey limestone Art Deco tower’ that holds a distinct position on the New York skyline. 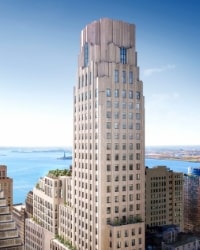 It occupies an entire block at the corner of Broadway and Wall Street – a major financial district most often associated with the US stocks and shares market and the 1929 Wall Street Crash, which led to the start of the Great Depression. It is neighboured to the east by the landmark New York Stock Exchange.

The building was originally constructed for the Irving Trust Company in 1931 by the prominent architect Ralph Walker, before subsequently being expanded in 1963. The property contains approximately 1.1 million sq ft of gross floor area and is viewed as one of the most distinctive assets in the Downtown market.

The building itself offers panoramic views, ‘ideal floor plates’ for multiple uses, the ‘Red Room’, multiple entrances, and access to a number of transport hubs.

What do residents get?

The apartments have 10ft-high ceilings and contemporary, comfortable surroundings. Some offer terraces and views to New York harbour and the Statue of Liberty, while others face Trinity Church, where one of the founding fathers of America, Alexander Hamilton — the inspiration for the smash-hit musical — is buried.

One Wall Street residents will have exclusive use of The One Club, covering the 38th and 39th floors and including a 75ft indoor lap pool with panoramic floor-to-ceiling windows on three sides, a super-sized gym and spa, garden terrace, concierge and a dog grooming service. There are also several lounges and a two-level landscaped terrace with views of the city.

The original Ralph Walker-inspired building included a cavernous Red Room ground-level banking hall, clad in red-orange-gold mosaic, and a matching White Room decked out in ‘mother-of-pearl seashells’ in the ‘beacon-like pinnacle’. The White Room has been transformed into the lofty, one-of-a-kind penthouse, while the Red Room – the iconic feature of the building that was occupied by Irving Trust and later the Bank of New York - has been converted into a 'dazzling' new retail hall. The room features a 5,000 sq ft, triple-height floor-to-ceiling mosaic by muralist Hildreth Meière.

A glass curtain wall has been added to the lower levels of the building, where a huge 44,000 sq ft Whole Foods Market and Life Time fitness & health club will be situated. It's set to become the most extensive health and wellness centre in New York. 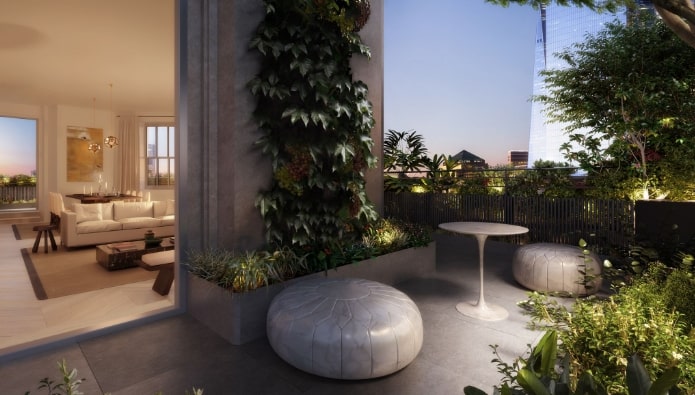 This part of New York has been, and still largely is, dominated by financial institutions, but there has been growing residential demands in the city which skyscrapers such as One Wall Street are trying to meet. With its Art Deco style and limestone façade, it’s certainly one of the more unique offerings for New York buyers and investors. It’s expected to complete by the end of this year.

You can find out more about the painstaking restoration works here. Last year we took a closer look at the Big Apple’s property market and recently covered the launch of the Towers at Waldorf Astoria in nearby Park Avenue.

How popular is New York with investors?

The recent release of the 2020 Knight Frank Wealth Report signalled good news for New York as the city edged past London to secure the top spot in the City Wealth Index, reclaiming its position as the dominant urban hub globally.

The research found that property makes up the largest proportion of investment portfolios held by UHNWIs and that New York is home to the highest number of these UHNWIs.

Revealed: New Yorkers head for London as the Big Apple loses its shine ...

Haringtons, an independent buying agents based in London, has seen a...